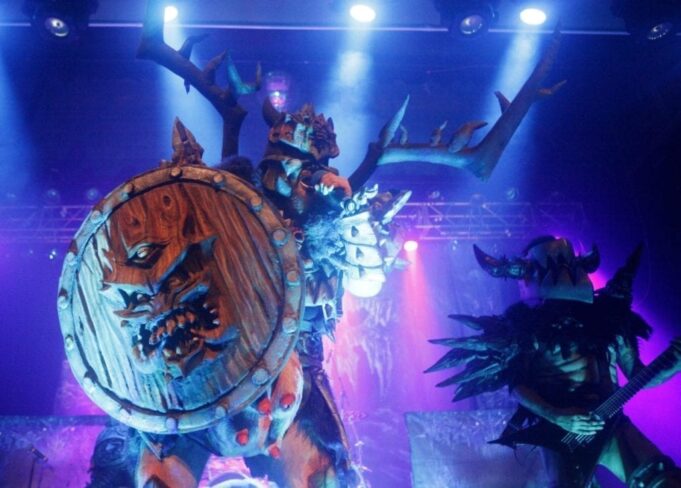 I ran out last night solo to the Sherman Theater to catch the GWAR show. Somebody somewhere, probably years ago, recommended I see GWAR. When I saw a nearby easy opportunity, I became interested.

I was a complete virgin to GWAR, knew very little about them, so I had them stereotyped as a bunch of “no talent death metal wankers” in costumes. However, those who know my sick, twisted, dark, degenerate sense of humor told me I’d love it!! My expectation was they’d be in the direction of Kiss/Alice Cooper, but much further down that road. I  was surprised to learn that GWAR has been an ongoing entity since 1984! 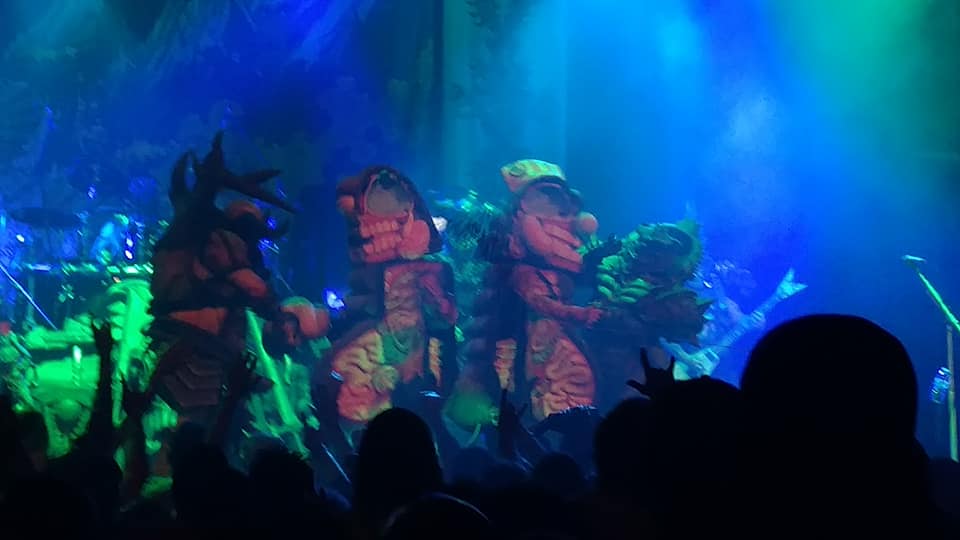 This type of music is by far, way way out of my normal lanes. Dead, Phish, Old School Prog Rock, Americana rock, Classic Rock & Bluegrass are the roads more “well traveled” in my musical life. But if there’s some sort of performance somewhere that’s generating a lot of buzz, and they put a lot of time and energy into an outlandish production, I like to peek over the fence and experience it.

So I found myself in the audience of this show, me likely being the oldest, baldest one in the building (besides staff). Ohwwa. Muyyyyy. Gwaddddd!!!!!! That was about the most outrageous, over the top, sick, nauseating spectacle I may have *ever* seen!! Completely captivating. I stood there the whole show with my jaw on the ground, shaking my head and laughing at the insanity. I LOVED IT! I am so glad I took the chance on this!

Musically speaking, it really wasn’t horrible. While I was pretty accurate with my expectation on the vocals (Sounds like Darth Vader being sodomized by a Light Saber Sword), the band had a certain sound, maybe in the direction of Tool, or Metallica.. I was pretty basic, straightforward fast tempo’d, drum-heavy, growling vocals heavy metal, nothing elaborate. There’s probably better descriptive terms for that type of music, maybe “Goth Metal”?

The core of the band was a 5 piece, comprised of a Drummer, two Guitarists, a Bassist, and a vocalist. But there were another 3 characters who kind of flew in and flew out, taking over vocal roles, or coming in with other costumes. Since the cast members often play “musical chairs” to fill the various character roles, I can see why the music is kept fairly basic and learnable. I was impressed that anyone could play as well as they did with all of that costuming on. I’m sure they all question their occupational decisions when playing summertime festivals in heat waves.

While this was no doubt, a heavy metal musical performance, it was not quite the central focus here. This was more of a huge production, with a story line, outrageous costuming, shocking content, and characters with defined roles. Overall, the whole point of this was to create the most outlandishly revolting, repugnant display possible, and they overachieved brilliantly on that!!! BRAVO!!!

Like Halloween meets the Rocky Horror Picture show/Kiss/Comic Books and a Snuff Video. I had a hard time understanding any lyrics or any of the onstage banter, but the gist of the story line was this: Extraterrestrial beings land on Earth, encounter various types of people to which they crush, kill, destroy, sodomize, rape, etc. Then they leave! (One of the final songs called “Fuck.. This… Place!).

The set and the costuming was completely amazing. The stage styled after some sort of blend of “comic book action hero” and “steampunk”. While each band member was a unique character, their costumes were similarly styled, with gigantic horns, skulls, tusks, and lots of Steampunk style armor. But there were several other costumed characters that were built very specifically for the shock and awe of the performance.

Example #1: A big fat Donald Trump character, who had his big fat chest panel ripped open to expose a beating heart and ribcage, which then sprays fake blood all over the audience. Not unlike Monty Python’s “Mr Creosote” character in the “Meaning of Life” (go YouTube it)!”

Example #2: Some sort of Dinosaur character, that got split clean in half with an axe, each half exposing detailed innards, each half operating independently, dancing around, spraying blood all over the audience.

Example #3: The big fat creepy cross-bearing Priest character who took an axe to the head (spurting blood all over the audience), followed by him being turned around, pants ripped off to expose a huge fat ass with a gaping butthole, sodomized with the cross, producing yet another huge stream of blood shot into the audience!! There were even a pair of stagehand-slaves who were costumed.

Maybe about ¾ of the songs featured a costumed character being Ripped open, chopped, dismembered, etc. resulting in a 30 ft. spray of blood all over the delighted fans! Some of these costumes had subassemblies, to include removable brains with dangling eyeballs, etc, which when removed, produced their own streams of blood! (I understand that GWAR makes it’s own costumes, which is quite a feat since some of these things required compressors, hoses, connections, etc.).

The fans were ready for the sprayed gore and disgustingness. Those up front all wear white. It’s like a badge of honor to collect as much blood spray as possible while in the audience. (At the end of the show, when all these folks walked into the street, it looked like a zombie invasion!) Whatever Venue GWAR plays at, has to expect the splatter and protect anything important. The Sherman Theater removed all seating near the stage. Other venues will drape tarps on the side mezzanines, etc.

The show was not well attended. If they place can hold say 1500 people, maybe 400 were there. The balcony and a large percentage of the seats in the back were off limits. I couldn’t help but think that this show would be quite appropriate for some sort of NYC Broadway residency of some sort, but it’s not at all kid friendly material. 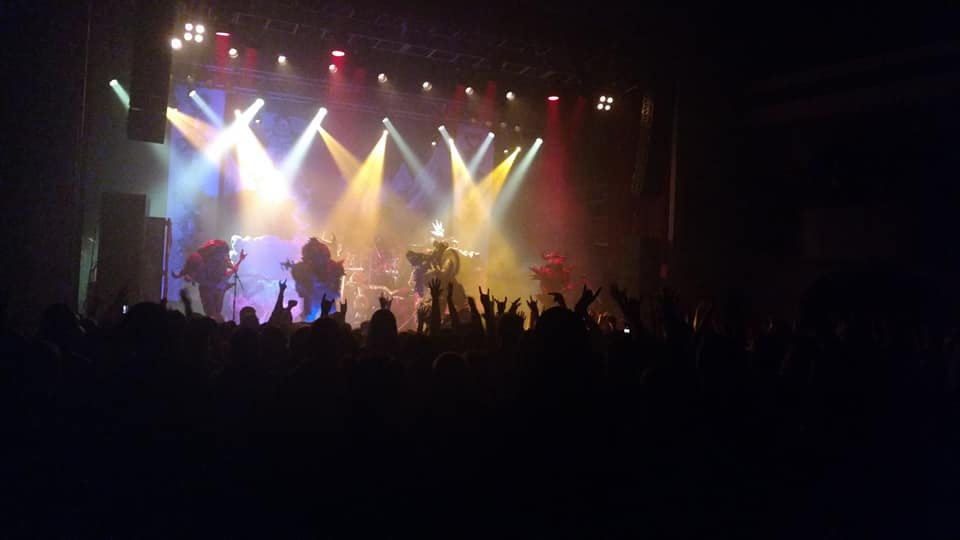 I caught a few pictures, but I tried to stay out of range of the spurting slime, and the set was heavily backlit, so my pics aren’t great. You’d do better to YouTube GWAR videos yourself because they’re very well represented there. The two opening bands had their own entertainment factor. The first a bass-dominated threepiece called “American Sharks”, the second a 5 piece heavy metal band called “Miss May L”, with an energetic frontman encouraging a huge mosh-pit (how his vocal cords lasted thru that style of singing, I’ll never know), and a very powerful, driving drummer. Kinda could have done without them as they just made my work weeknight longer, but they did a good job of priming the audience.

Anyway, I’m so glad I went. I’d love to see them again, this time I’d insist on dragging along some of my friends who share my dark sense of humor. One of the more memorable performances I’ve seen in ages..that I’m better off only discussing with friends. LOL. Got home at 12:30am.

From the video channel of Metal Blade Records