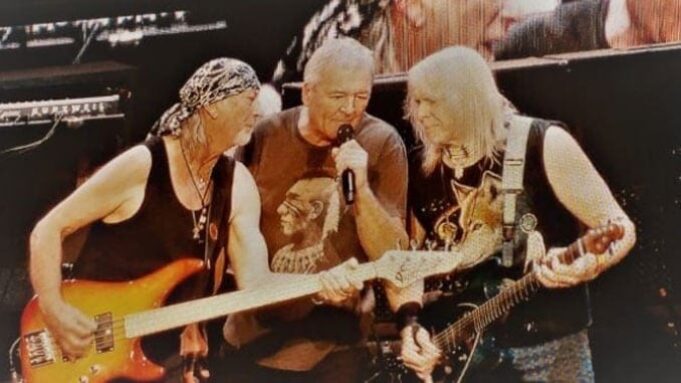 Story, photos, and video by Sam Simon and Father

The excitement built as the day drew near, and a trip was planned four hours from home to go see two giants of hard rock, heavy metal and classic rock, Judas Priest and Deep Purple.  I have never seen either band, so it is always super nice to add shows to my personal connection.  Over the last year or more my son Sam had been getting more and more into Judas Priest and it was a great opportunity to catch the band in a year or more of resurgence that includes a new album and a significant touring schedule.

Bethel Woods was a relatively easy journey.  We caught a nice dinner at the Catskill Distillery, and managed to miss the legendary traffic that sometimes exists at this venue.  We pulled into the parking lot and were pleasantly surprised that there was no fee whatsoever to park.  We were able to chat and tail gate for a little bit with others in the parking lot, a friendly bunch of mature metal and hard rock fans, ready for a great time. We wandered through the parking lot and the manicured grounds to the Will Call to get our tickets.  Another pleasant surprise, reserved seats in the fourteenth row, Wahoo!

An easy trip through the gates, minimal to no search, and then we were inside this beautiful venue.  The lawn and pavilion were pretty standard for a shed amphitheater, but the grounds leading up including the vending and concession areas included a little stream that meandered through plus nice grass and trees and shrubbery.  It’s just a nice place to hang out for a day with the family. 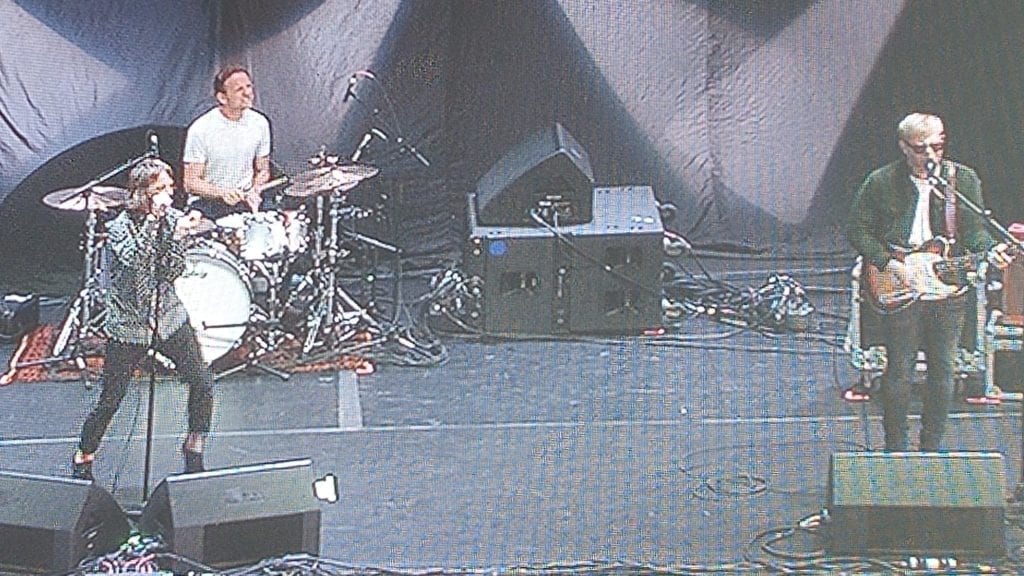 The ushers and staff were also super friendly and we found our way to our seats with ease.

The first band took the stage, the Temperance Movement.  A five piece rock band with drums, bass, two guitars and a dedicated lead singer.  They were better than I expected and really a great warm up to the show.  They played about a half an hour with a lot of energy.  The band is a vehicle for the vocalist Phil Campbell, who reminded me of a hard rock Chris Robinson (the Black Crowes, etc.)  But, the rest of the band should not be underestimated with great rock riffs from both guitarists Luke Potashnick and Paul Sayer.   I was several times impressed with the hard rock rhythms built by drummer Damon Wilson who was rock steady and locked into bassist Nick Fyffe.  I really enjoyed their set and wouldn’t hesitate to go see them again on their own.

Up next was the main course for us, Judas Priest.   A big heavy metal stage setup was created with a giant tapestry across the front of the stage while it was being set.

The intro music for Firepower started, and eventually the tapestry dropped and was sucked into a machine and out of sight in a split second.  Fog and lights and screaming speakers came to life and the band was firing from the start.

Long time drummer Scott Travis formed a lock tight rhythm section with virtual original member bassist Ian Hill. A dual guitar assault was left and right on stage as Richie Faulkner shredded note after note and was supported by new guitarist Andy Sneap (a well-regarded player and producer with scores of credits outside of Judas Priest) who also took plenty of time to shred himself.  And then the emergence of the metal god himself, Rob Halford. . . Full-throated with a range that consistently defied his age (he just turned 67 a week ago or so), from his signature baritone to ear-piercing falsetto screaming Halford is at his prime somehow forty years or more into his impressive career.

One song after another, from the Firepower opener through new material, deep cuts and classic rock hits Judas Priest had the audience in the palm of their hands.  Nearly every song Halford disappeared into a corner of the stage where a little retreat was set up, emerging in a new metal jacket/robe garment featuring anything from denim to chain mail to leather and more.  He roamed the stage and ruled the world for the 15 song set.  The audience joined along to sing with Halford for classics like Turbo Lover or Hell Bent for Leather.  My personal highlight was the classic You’ve Got Another Thing Coming. 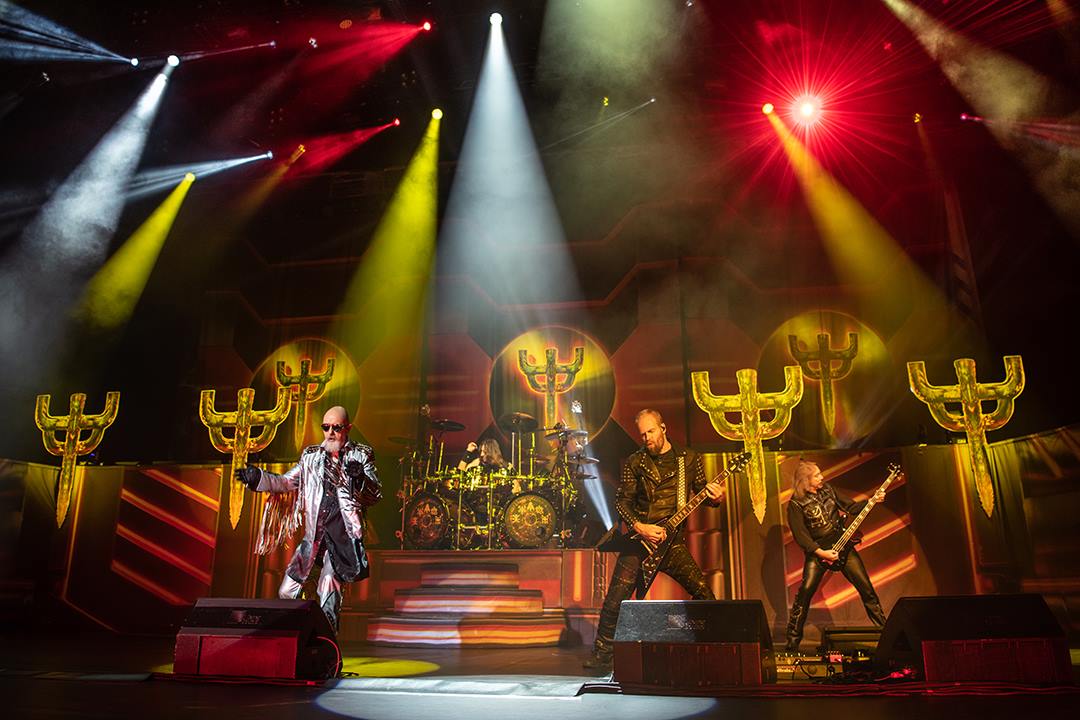 Fans of less popular material were rewarded with songs that covered the decades of the band’s history.

After a very brief departure they returned for a significant encore, complete with Halford riding a motorcycle onstage.  Metal Gods gave way to the first time the band played No Surrender without Glenn Tipton (who is not on tour anymore due to Parkinson’s disease) and you could feel his presence in large part due to his inclusion on the giant screens that adorned the stage.  A double dose of classic Priest closed their set with Breaking the Law and finally Living After Midnight.  We were left awestruck at an amazing show.

We wandered out for some concessions and sat on the grass for a little while and watched people for the set break.  Everyone was super happy with how the show was unfolding and a new excitement was building for Deep Purple. The band took the stage with little of the decoration of the Judas Priest stage set.  It was a relatively plain stage with drummer Ian Paice in back, Roger Glover on bass on one side, keyboard legend Don Airey just in front of Paice and guitar hero Steve Morse on the far side.  Ian Gillan roamed the stage and the band opened the show with their early hit Highway Star.

Gillan was a bit startling at first, as at the ripe age of 73 it is unusual to see someone so mature up on a rock and roll stage.  It took him a few minutes to warm up but he was in fine voice throughout the show.

I am slightly ashamed to admit that I didn’t realize that Steve Morse was in Deep Purple until the afternoon of the show.  I had seen him, I’m not sure, almost thirty years ago open for Rush and I was ready to be amazed with some guitar work. Morse did not disappoint as he was able to both pay homage to the significant catalog of Deep Purple and to illustrate his uncanny abilities on guitar.  At any given moment Morse could amaze you with his fret work or stun you with his agility.  The maneuver with his pinky on the volume knob was enough to blow my son Sam’s mind alone.

Every player had their moments on stage and easily illustrated their place in rock history.  Drummer Ian Paice was stunningly good, able to swing between blues and hard rock.  Glover wandered the stage with a huge smile.  Don Airey’s distinctive organ sound was everything you wanted, rumbling and rocking the whole show.  And Ian Gillan was able to deliver the songs with the power and nuance required of a rock band that has hit fifty years.

In the middle of their show the band featured material from their rebirth in the 1980s, with the classic Knockin at Your Backdoor.  This was followed by a lengthy solo by Airey on the boards with a fun Star Spangled Banner interlude.  The band flowed into their hit, and what I think is now my favorite Deep Purple song, Perfect Strangers.  They nailed the syncopated bridge and I was loving their performance.  As the night was deepening the band was cooking.

Deep Purple closed out the set with a double dose of classics.  Space Truckin’ had the full psychedelic sound complemented by tripper vision on the screens.  And their seminal hit closed out the show, Smoke on the Water.  The crowd had diminished post Priest, but the energy on stage was palpable.  After a virtually nonexistent exit from the stage the band came back for a single encore with their hit Hush.  A great show by Deep Purple after a great show by Judas Priest after a great opener by the Temperance Movement equals an amazingly great night.