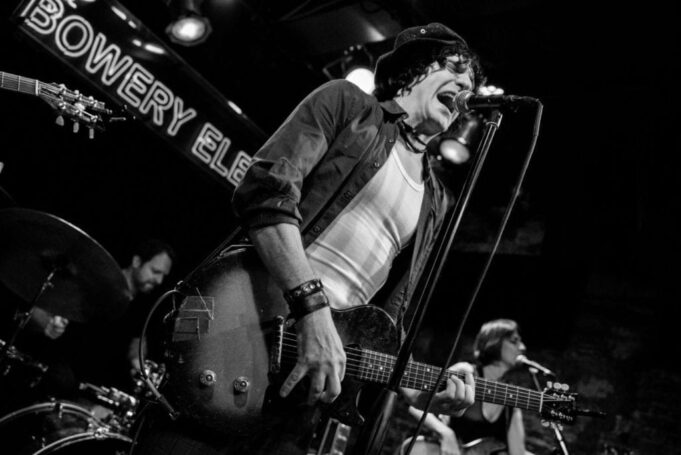 Jesse Malin and band played an amazing set at The Bowery Electric in New York City as a warm-up for their Strummer Summer Jam 2018  show, benefiting the Joe Strummer Foundation.   Malin hasn’t played a full band show in about nine months and he and the band weren’t rusty at all.  The sold out crowd at The Bowery Electric loved every second of the show.  Malin scampered into the audience, the sound booth and even in the merch stand.

Malin’s expanded band included Derek Cruz on guitar, Cat Popper on bass, Randy Schrager on drums, Michelle Casillas on keyboards, Indofunk Statish on trumpet, Danny Ray on saxophone, with backup vocals by Liza Colby and Kia Warren.  The stage is a bit too small for the horns, so they played on the steps to the dressing room.  The Bowery Electric is a cozy club just steps from where the famous CBGB’s was located.

The full gallery of photos from this show is located here.

The show started off quite with couple of acoustic two songs Cigarettes & Violets and When Your Young, but then Jesse and band started to hit full throttle with Meet Me At The End Of The World, his latest single from his EP of the same name.

Jesse Malin is a super dynamic performer who always gives it 110% and this show was not a letdown.  Malin, 51 has been performing since he was 12 and he’s only gotten better with age.  Most of the rest of the show was full-tilt rock ‘n’ roll.  Jesse is off to Europe for a month, with Derek Cruz, but he has an October residency, playing four Tuesday’s in October at Coney Island Baby in New York City with the full band.’

From the video channel of bhickjr

Set list: Cigarettes & Violets When Your Young Meet Me At The End Of The World Don’t Let Them Take You Down Wendy Brooklyn If I Should Fall From the Grace of God She Don’t Love Me Now Turn Up The Mains Black Hair Girl Burning The Bowery Boots of Immigration Russian Roulette Here’s The Situation All The Way From Moscow You Know It’s Dark When Atheists Start To Pray Sally Can’t Dance/Rudie Can’t Fail

The full gallery of photos from this show is located here.