The Smithereens Center for Arts in Natick, Natick, MA August 25, 2018 Story and photos by Jennifer Simon

Saturday night the Smithereens took the stage at the Natick Center for the Arts with original members Jim Babjak as lead guitar, Mike Mesaros on bass, Dennis Diken on drums & Marshall Crenshaw on guitar and lead vocals.

Crenshaw is best known for his Top 40 hit “Someday, Someway” that he scored in 1982. Diken has also been performing with Dave Davies of the Kinks and Ronnie Spector as of late. Roaring straight into Smithereens classic “Wall of Sleep,” The Smithereens and Crenshaw demonstrated that this was not going to be a snooze fest.

The 24 songs – 2 hour single set featured all the expected Smithereens favorites along with great covers.  Including the Kinks “Tired of Waiting for You” and the Outsiders “Time Won’t Let Me”(featured in Jean Claude Van Damme’s Time Cop)  – from their album Covers, naturally. While in his youth Crenshaw’s voice was a bit higher than Pat DiNizio’s, time – and possibly a bit of rock n’ roll life style – have given it a deeper rasp.  After “Top of the Pops,” he recited several lines of what I thought was poetry into the mic, followed by “those are the lyrics I  forgot.  I thought you deserved them.” 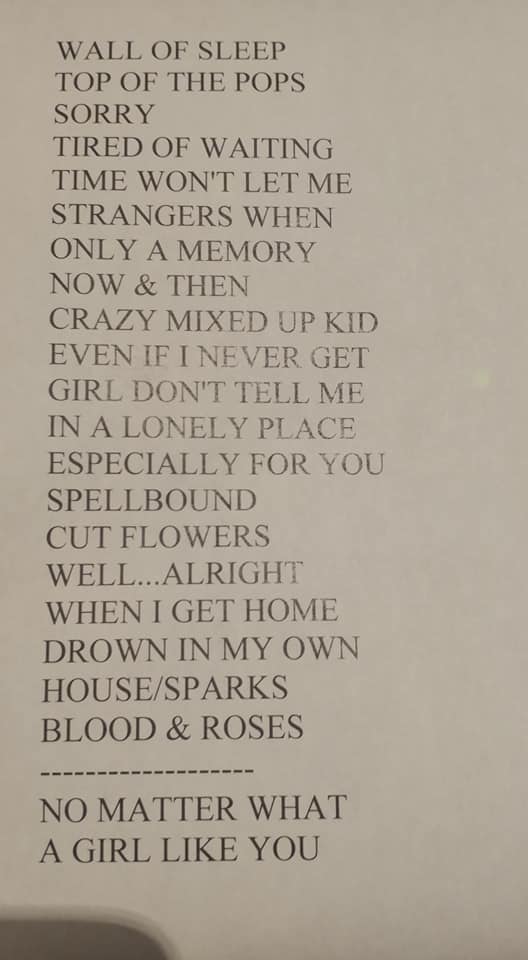 In the Smithereen’s 38 years together Pat DiNizio had done most of the “between song” patter.  Saturday night chit-chat.

Setlistwas definitely at a lower level, but was more evenly shared.  Jim Babjak spoke fondly of former singer DiNizio, who passed away earlier this year at age 62, and invited the crowd to toast him.  Dennis Diken spoke a few times from behind his drum kit. Shockingly, Mike Mesaros even stepped up to the microphone and uttered several sentences.  This is not meant as a dis of Mike, but bass players as a group aren’t exactly known for their chattiness.  My heart was with Crenshaw.  It’s not easy being the new guy, especially when the the old guys have know each other for decades.  I mean – Yikes! – the assistant road manager has been a friend since 1980 and was Pat’s neighbor, too.  Over all it was a fun, rock the house, good show.  The Smithereens was all one could ask for and Crenshaw helped make that experience happen for us all.