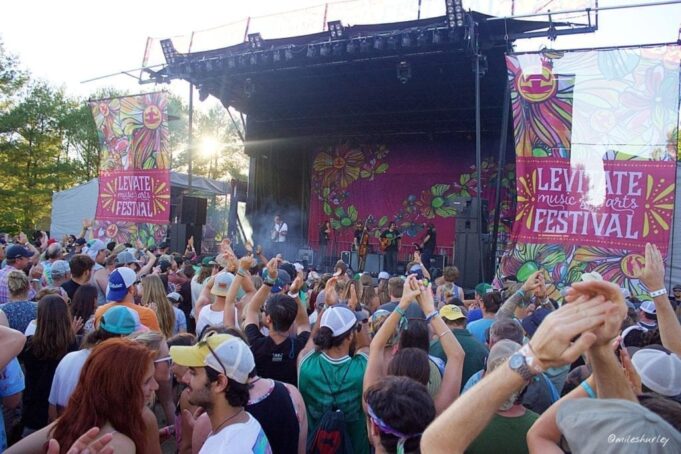 Even only lasting two days, Levitate Music and Arts Festival hits the heart of summertime with a kind of refreshing, kindred zest that signifies its goal of rivaling the biggest festival event names out there. For its space and time in Marshfield, MA Levitate makes sure it all goes right every year-the scene and atmosphere are pleasant and chill, and the crowds are always super dialed into the music collectively. Of course, it helps to have a savory lineup of artists delivering great sets of music, and such was the case once again with Levitate’s sixth consecutive return last weekend.

This time around, Levitate made sure to have more than an ample share of some of the most noteworthy in modern reggae for its lineup, and kicking off the festival’s first day on Saturday was a newcomer in that respect, New Kingston. The Suffers and Ripe followed with their own respective sets, and these are two artists that are also seeing an equally inspirational rise in popularity over the last year or so. The two groups threw down early on Saturday with full-fledged, relentless musicianship to meet groove-heavy music. In addition to this, Slightly Stoopid and Stick Figure both vlew the place out with their own more time-tested reggae magic. Xavier Rudd’s set, however, made him a contender for most widely favorited of either day of the festival. Trekking excitedly back into the gates Sunday morning, one heard here and there about how fantastic Rudd’s set was. The island-folk singer-songwriter broke out his mystical digeridoo chops as the musical cherry-on-top to a passionate and soul-brightening performance.

The Trey Anastasio Quatro, as the Trio became known since the delighted return of Anastasio’s keyboardist Ray Paczkowski last week, has been churning out extra jam-heavy sets over their recent northeast tour. The setlists have been very similar to one another from day to day-Trey Quatro headed off multiple nights in a row, including their Levitate headliner, with the opener of “Blaze On,” for example.

But concerning the Phish frontman and his jazz-qualified backing band, a typical setlist is hard to complain about at all, as jam veterans like these are pushing for unique, inspired improv each night on the such same tunes, and unique and still exhilarating jamming certainly populated their great Levitate set. It was topped by Trey’s charming acoustic solo performance portion, in which he warmed hearts with versions of “Waste” and “More.” Early Sunday morning, Levitate vamped the energy back up bright and early with sets from Jon and Roy, Quadrafunk and West End Blend.

West End Blend, the dynamic 8-piece up-and-comers have been coming into their somewhat recently updated lineup, featuring a brand-new lead singer that centers the amped up soulfulness of their most recent record, Attitude. They brought a whole lot of fun to the middle of the day on the Soul Stage. Spafford pleased both their diehards and perhaps new Levitate fest goers with a wide-variety set of originals-a pretty volatile “America” to kick things off, followed by a longer and spacier extension on “Backdoor Funk,” before and a “Beautiful Day” that was certainly appreciated by the majority of the Levitate crowd. Greensky Bluegrass, perhaps striving to be the most memorable set of Levitate 2018, mixed within strong versions of their own material a few highly appreciated guest sit-ins.

The progressive grass leaders invited jam scene veteran Ryan Montbleau up for an out of the blue surprise in “Gangster’s Paradise,” right before a lush, mellow extended jam on their improvisational tune “All Four.” To end their set, which signaled an all-time high for quirky stange banter, Greensky brought up guest number two: Spafford lead guitarist Brian Moss. Moss went toe to toe with mandolinist Hoffman and dobro player Anders Beck on a quick but hot version of “Kerosene.”

Lake Street Dive, true royalty of the festival scene these days, manage to steel over thousands of hearts just by walking out on stage. Such was evidenced by audience members presenting Dive’s lead singer Rachel Price with a bouquet of flowers. Among offers of material from the soul pop group’s new album, Price and gang lead Levitate through a medley of their songs “dealing with Bobby,” which refers to the several feel-good and supremely catchy, yet emotional, songs detailing the arc of a relationship.

Rebelution, likewise, had folks of all ages gathered in a service of feel-good reggae. Even little kids were getting down and reflecting the Saturday sunny afternoon vibe set out by the alternative dub rockers. Towards the end of their set, Rebelution paid a cool tribute to fellow reggae legends Steel Pulse.

Being that Twiddle and their frontman Mihali Savoulidis occupy a well-earned nesting spot in the heart of today’s jamband culture, there was no surprise at the stage of guests joining Savoulidis, and fellow bassist Zdenek Gubb, which included Trey Anastasio drummer Russ Lawton, Dopapod members Eli Winderman and Rob Compa, and a revolving horn section. While much of their special hour was treated with more easygoing reggae, such as an extended yet straightforward linking of Bob Marley with Sublime with Phish’s “Farmhouse,” the set reached some ecstatic points including a sit-in from Greensky Bluegrass’ Paul Hoffman, and a banger of a send-off: guitarist Rob Compa singing Alanis Morrissette’s “You Oughta Know” and leading it towards a truly rocking final jam.

The festival’s side stage MC directed people’s attention to the final act for the main stage, saying “The Head and The Heart, if you’re into that sort of thing,” which was a curious way to introduce Levitate’s final performance. Perhaps the indie folk group are a specific musical taste. But tHAtH certainly put on an emotive performance to end the weekend, with big performances of their hits like “Down in The Valley,” and “Rivers and Roads” to conclude the weekend. Sarah Culver reports that the Head and the Heart played a surprise VIP acoustic set.

Levitate 2018 came and surged by in two quick days, but days that were made memorable and stand-out worthy even in the context of what is shaping up to be an overall memorable summer of music across the country. A great little getaway of genre-bending performers, Levitate kept its Marshfield, MA homies and the music lovers traveling afar happy and moving pretty much the whole time.