Women’s History Month came to an illustrious close with a concert by two of the Valley’s finest female-centric bands in none other than that bastion of gynocentrism, Northampton, Mass. Old Flame, the headliners, threw the show as a celebration for the release of their latest effort, an EP entitled Hush Money. They brought along teen phenoms Kalliope Jones, who more than held their own as the opening act.

Kalliope Jones made national headlines a few years ago for rightfully calling out a battle of the band’s judges’ sexist (and deeply inappropriate, considering all three members are adolescent girls) comments regarding a performance of theirs in 2015. Since then, they’ve gone on to make a loud and proudly feminist name for themselves- I recently saw an all-too-brief set of theirs at the Women’s March held in the town square in Greenfield back in January. Their set at the Parlor Room show, however, was my first full-on KJ experience. Simply put, I was blown away.

The trio consists of drummer Alouette Batteau, bassist Amelia Chalfant, and guitarist and lead singer Isabella DeHerdt. Performing with a wisdom and maturity that belies their youth, Kalliope Jones rocked a packed crowd. In my notes from the night I wrote, “sassy funk blues rock” to describe their sound, which is fairly accurate. For some reason, people were at first sitting down on the floor to take in the show. . . I’ve mentioned before in previous reviews how that is not conducive to my enjoyment of a show.

Thankfully, due to necessity of letting more people into the space, we all had to stand up towards the end of their set so I got to rock out properly. During their song “The Haze,” in which the audience was instructed to clap along, I timed the opening of my BYOB beer perfectly to the click of Alouette’s beat of her stick on her drum rim. Kalliope Jones’ lyrics are clever and the bandmates clearly enjoy playing together. Each are intelligent and funny; discussing Old Flame’s upcoming set, Amelia the bassist enthused, “They’re *pause*-ing awesome! . . . I’m 16! I can’t swear onstage. It’s not allowed.” The refrain of one of their new songs got to me, not only in terms of clever alliteration but also the historical reference and wisdom of experience rather than innocence:

Sung by all three of them, but most prominently by Isabella in a throaty growl, it damn near gave me chills. Like, whaaat? These ladies are going places with those kind of smarts.

Shortly after, Old Flame took the stage. Consisting of Emma Ayres on vox, Sam Perry on guitar, Ken Birchall on drums, and Nate Mondschein on bass, this band has been around for less than a year but has certainly made an impression on the Western Mass music scene. This is at least partially to do with Emma Ayres’ tireless efforts to support her fellow artists- she is in lovely cahoots with Linda McInerney of Eggtooth Productions (as am I) and also runs Nest Productions which hosted a concert back in May 2017 with other Valley greats Mamma’s Marmalade, Carinae, and Workman Song. That’s where I saw Old Flame for the first time and while they were good then, they are fantastic now. As they put it, “Old Flame is a machine of resistance.

Born in the Western MA, DIY scene, the indie-rock band spins grit and honey-rasp vocals into a psychedelic post-punk nostalgia with an afterglow of raw blues.” Emma has pulled no punches in saying in the past that the band was created as a direct result of this current regime under which we’re all suffering and Hush Money, the new EP, even alludes to that in its title.

Their sound is a bit more polished than when I saw them at the Shea last May; I’d consider them a funky combo of psychedelic indie rock and punk with some folk thrown in there just for kicks.

Emma is a consummate show-woman; there were many instances of her eyes a-blazin,’ her fist thrown in the air, and times when she hurled herself onto her knees to get her point across. Sam has the long hair of a proper guitarist and had no problem tossing it to and fro as he slammed power chords on his axe throughout the evening. Ken and Nate are the more staid of the four but to be fair, if there were four crazies onstage, the whole thing would dissolve into chaos. Performing most of their songs off Hush Money, Emma dedicated “Hollow” to her fellow musicians and artists: the movers and shakers of the creative world.

Recently released with a music video complete with a choreographed dance of women decked out in flapper togs, for Chrissakes, the song is a quiet banger with a hypnotic, dangerous bass and guitar lick. Its lyrics, while cryptic, can perhaps be deciphered through its chorus:

As swirling and apocalyptic as the music seems beneath the lyrics, it seems to me that the song is written from a stage perspective: the “one way out” is the (painful?) necessity be true to oneself, to stand out above “this sea of heads.” But hey. That’s just MY interpretation. What’s yours? In a direct criticism of the current conditions of society, the band tore into “Service Industry,” with the evocative line “bending over backwards just to make ends meet.” Like Kalliope Jones’ widows/whalers allusion, this witty wordplay will stick with me for a while. Some highlights of the show include Emma leading the crowd in a singalong of Janis Joplin’s “Mercedes Benz” and launching into their original “Venus Fly,” but not before bellowing “Well that is certainly a song of great social and political importance!” à la Ms. Joplin herself.

The audience got to participate in another tune, softly chanting, “What’s it like to be on the other side of nothing?” along with Sam on backup vox.

A freaky, floaty tune entitled “Send Me Away” saw Sam Perry make like Jimmy Page in The Song Remains the Same and bust out a violin bow to tear up his guitar solo. The result was a mesmerizing reverb that made jaws in the audience drop.

After “Smoke Show” ended the set, we clamored for more! More! More! and the members of Old Flame were happy to oblige and stormed back onstage to rip into Jefferson Airplane’s “White Rabbit.” Lyrics like “When logic and proportion have fallen sloppy dead” feel all too real even though they were written over 40 years ago. . . but with bands like Old Flame around, the spark of resistance is as alive and well as it was back then. 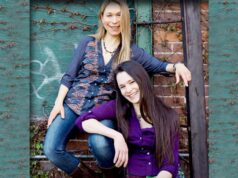 Weege and the Wonder Twins at New City Brewery-March 10th, 2017