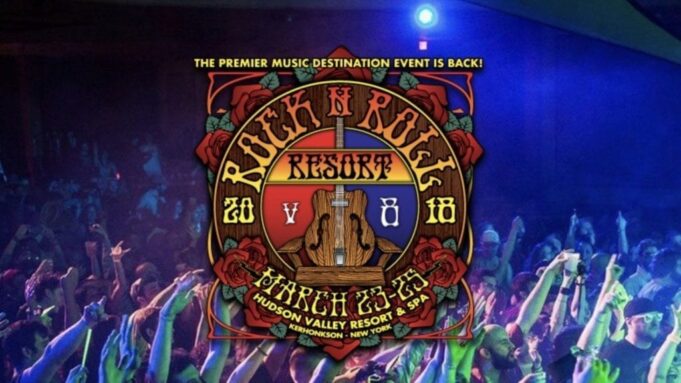 So I was up til 4 AM hanging out, cutting up audio tracks and winding down from a full day one of Rock and Roll resort.  My buddy had crashed in our room and took off in the early AM and I was able to sleep until late morning.  The promoters were kind enough to let me into the ballroom where I connected with networked internet and started uploading Friday show audio and my day was started. We ate lunch in the dining room and it was a nice brunch set up, with excellent potatoes, an omelet station and various breakfast treats, coffee, juice and the like.  We powered up nicely and got ready for the day.  An afternoon nap was successful for my lady, but not for me, I just couldn’t wind down while the music was getting started. I caught up with Creamery Station who took to the lounge beneath the stairs area, I’m not sure what they were calling it.  The band came hard and hot and had a big crowd considering the non traditional set up to the spot.

Check out the review of Friday which included sets by Golden Gate Wingmen, Kung Fu, West End Blend, and more.

Dylan Kader, who plays mandolin and supplies some of the vocals for Creamery Station had this to say about the weekend,  “”We couldn’t have been happier with the crowd’s response to our music and the overall vibe of the event! This was Creamery’s first Rock n Roll Resort and we quickly felt at home upon arrival. No doubt that this is a not to be missed event every year!   We got to play a few songs off of our forthcoming album and we couldn’t have asked for a better reception from the crowd! Nothing feels better than looking out and seeing a packed room getting down and truly feeling your music. That is what all of us get up on stage and live for!”

The band played 10 songs in a roughly one hour set. During that time they played originals and covers by the Allman Brothers Band, Bill Withers, New Riders and the Band and that pretty much will tell you the type of music that they are playing, roots Americana with nods to jam and bluegrass.  At one point Emma Kales jumped up and did a song with them on violin. Emma is a friend of Jeff King, who is the new bass player for Creamery, and is a part of the infamous “Spirit Elevators” crew which is a pickup acoustic band that riders the elevators at RRR over the years, supplying people with moments of music and hilarity.  Kader thinks that he probably logged a good ten hours of elevator set time this weekend alone!  This is the type of spirit and vibe that is the cement and glue of the festival scene and this particular iteration is a creation that is unique to the Rock and Roll resort. Three songs of the Breakfast, use the arrows to toggle between songs.

The Breakfast followed with a classically frenetic set in the ballroom.  Both Tim Palmieri and Adrian Tramontano were well warmed up from the night before’s set with Kung Fu.

Cousin Earth took the next set in the Empire room and it’s welcoming night club atmosphere.  I have been hearing great things about this band of late and they really brought it.  I expected tons of ukelele from their previous band name (Ukelalien I think it was spelled) but the times I was able to drop in they were more focused on electric guitar. Full set audio of Cousin Earth, use the arrows to toggle between songs.

Overall the band is more proggy and heavier than I had expected, with fully developed jams that go on journeys for sure.  They engaged with the audience over the microphone and via their live set, and are a band on the march for sure.  They did a transition from Stevie Ray Vaughn to Jimi Hendrix (Little Wing) that illustrated the guitar player’s desire to spend a little time with that instrument on this night, for sure- while showing their knowledge of the heroes who have come before them.

The ‘headliner’ of the weekend came on for their first set, Melvin Seals and JGB.  The band has Zach Nugent at the helm doing many of the lead vocals and lead guitar.  Melvin Seals of course was seated at the organ, and the band was hot. There were two lady vocalists and if my eyes do not deceive me that’s Sunshine Becker at one of the mics, who I have seen many times with Furthur in the past but never with JGB that I can recall.

In between the JGB set Tweed appeared in the Empire Lounge.  For those who can’t  picture it, the lounge was merely steps from the main ballroom so you could easily go in there, get a drink, and see the tweener sets without missing even a minute of the ballroom sets. Tweed has been around for a good long while, and I enjoyed their mix of prog, rock and tronica leanings.  They roughly reminded me of Flux Capacitor but it has its own flavor as they do.  The drummer, Joe- who I had met in an artist lounge earlier in the day, was particularly engaging on the set. The band was lively and took full advantage of their prime time set. Joe from Tweed, “Rock n Roll Resort is always a blast! Great people, great music. I wish we could have stayed the whole weekend and experience all the festivities, but we had to jet to our studio on Sunday. We literally had to drag Jon off the dance floor Saturday night to make it back in time!” Full audio for TWEED, use the arrows to toggle between songs.

The ballroom was the most packed of the whole weekend with the JGB sets and they really came out strong as a ‘show band.’  The combination of their experience, energy, material, lights, and crowd made them the definitive show for the weekend, but with such freedom to wander around and see so many bands without missing anything makes distinctions like headliners and the like irrelevant at an event like this.  When I was in there for the climax of set two I spotted Ron Holloway and I don’t know how much of the show he was there for, but he crushed it.

This was the final night of an extended run for JGB and by all accounts, it was triumphant.

Scott Pemberton band is another group that is making a name for themselves and I have been hearing it for a while.  So I was really interested in checking out the trio in the Empire Room after the JGB sets.  They are truly unusual and engaging. Full Scott Pemberton Trio show audio, use the arrows to toggle between songs.

The trio is really something else-  Have you ever watched one of those cooking shows where they take away an element or utensil that is commonplace and make the chefs cook anyway?  Like, hey cook an omelet and pancakes, but no spatulas-  GO!  The trio is like that, and the item is so innocuous you probably have never noticed the usage very much-  the guitar strap.  Scott does not use one and the results are at times quite alarming.  Most frequently he has a giant John Deere stool that he uses as a stand for the guitar and he wails away. Other times he cradles the guitar and hugs it between his elbow and hip.  Other times he lays it down on the stool and plays it like a piano or as Jeff Healey once gig.  It’s amazing how much that one feature changes everything that is happening on stage. Additionally, Scott also plays percussion at whimsical times and at other times does crazy things with his mouth-  I don’t know how else to explain it-  cheek bongo?  The songs are progressive and definitive and at times they are creatively odd ball but still pleasant.  One song has a chorus consisting almost entirely of the band vocalizing loudly, “Meow Meow Meow” over and over again.  On the one hand it’s crazy and ridiculous, and on the other hand it’s fitting and endearing. This is a creative band- and they will not be everyone’s cup of tea.  But it is refreshing to see a band not just come out and do a bunch of jamming and covers of bands that everyone already loves.  They are taking up a harder challenge, that I’m not sure anyone issued, and they are running with it.

Kung Fu came back for a second night late night set.  The band seemed to have a great time hanging out at the event and at one time or another I ran into most of them, checking out other bands, eating and just being a part of the crowd. Full set audio for KUNG FU, use the arrows to toggle between songs.

Check out the review of Friday which included sets by Golden Gate Wingmen, Kung Fu, West End Blend, and more.