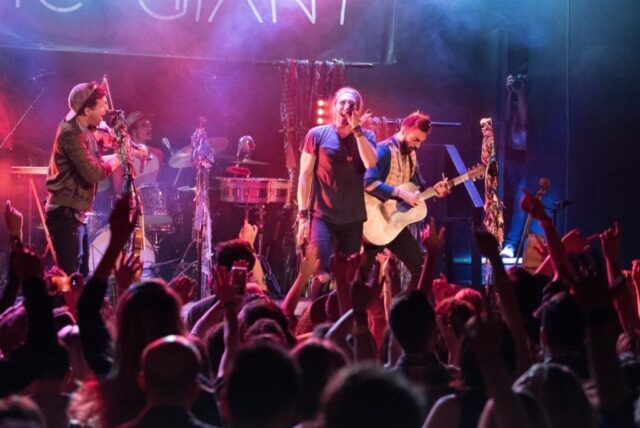 Magic Giant
Bowery Ballroom New York, NY
February 15 2018
by Mark Ashe Photography
To submit a review for consideration hit us at lmnandr@gmail.com Check out the Live Music News and Review.com Facebook page for updates and announcements.
Los Angeles pop phenomenon hit New York City on the latest stop on their seventy five city tour when they appeared at the famed Bowery Ballroom.  The sold out crowd reveled in the seventy five minute set.
Most recently added to the Coachella music festival and was lauded as one of the top ten bands to see there.  Billboard magazine calls them, ” a joyful live show the band is inspiring mass dance-alongs,” and the crowd at the Bowery certainly seemed to agree.  Additionally Magic Giant will be touring through early March and playing several festivals this summer including: BottleRock, LaureLive,  and Bunbury.
Check out the full gallery of photos by Mark Ashe Photography here.
The band consists of Austin Bisnow (lead vocals), Zambricki Li (viola, banjo, and harmonica), and Zang (acoustic guitar and cello).   They played cuts from their debut album In the Wind and everyone was singing along.  The album was recorded in their mobile solar powered studio as they were traveling around the country.
From the video channel of Theo Galanopolous
SET LIST:
Hideaway
Jade
Glass Heart
Eyes Wide
Let’s Start Again
Love or Die
Celebrate The Reckless
Nothin’ Left
The Great Divide
Shake Me Up
Rocket Man
Let It Burn
Window
Set On Fire

Panic! at the Disco New Hampshire