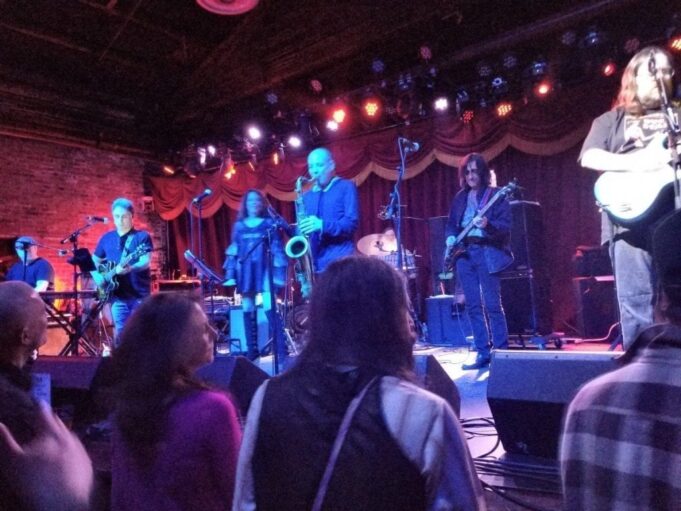 The Zen Tricksters featuring guest artist, Kenny Brooks and the Ominous Seapods, took the crowd on a wild ride at the Brooklyn Bowl last night.  This wasn’t a concert; it was an event. Kicking off the festivities were the Ominous Seapods on the  closing night of their acclaimed reunion tour, occasioned by the recent 50th birthday of bassist Tom Pirozzi. The Ominous Seapods are a jamband hailing from the 90’s, hatched in Plattsburgh, New York, settling in Albany, New York, and finally playing in venues all over the country. These guys lived on the road in a van together  and played with each other hundreds of times a year. Although the Seapods haven’t shared a stage together since 2011 (before this  reunion tour and Dana Monteith and his wife moved to Australia), as soon as they kicked into the opening song, Blackberry Brandy, it seemed as if no time had passed for them at all. They sounded great, were having the time of their lives, and their fans, The Ominous Seapod Mutants, loved every second.

Blackberry Brandy opened with a refreshing guitar refrain reminiscent of the Doobie Brothers. The band played on all cylinders, with Max Verna on lead guitar and vocals singing pleasingly yet slightly outside of the chord, Dana Monteith on supporting vocals and guitar, Tom Pirozzi on vocals and bass,  Brian Mangini on keyboards, and Ted Marotta on drums.  Vern plays elongated guitar solos sweetened with  beautiful Allman inspired melodic runs up the fretboard. Sneakin’ Sally through the Alley was next up, a fun and playful bluesy riffcentric romp featuring Tom Pirozzi and Max  Verna on weedy vocals, with the band full tilt behind them. Ted Marotta nails the  punchy 4/4  percussive in the pocket backbeat, while Verna launched his wah wah pedal, restating the refrain, and the band rocks out on a number of extended vamps.

The Guide to Roadside Ecology, from their eponymous album released in 1995, begins with the stage dimmed and dotted in deep indigo blue highlighting a shimmering arpeggiated guitar intro by Verna, sliding into some silken ensemble harmonies with the rest of the band featuring Dana on lead vocals. Brian Mangini delivers a rollicking blues solo on keyboards, plumping the mix by switching midway to his B-3. There were enough vocal, melodic and rhythmic hairpin turns, off kilter detours, side roads, and bridges to delight and amaze, all tethered to deep infectious grooves that anchored the proceedings.

Michael Murphy 3 was up  next, with  Monteith’s  quirky, funk inflected, sardonic  lead vocals, and the band pivoting like a  seasaw behind him, playing wide leap licks and swinging from one jazzy rail bending precipice to another without missing a beat. The band ran through an eclectic  and idiosyncratic range of musical genres during their 90 minute set that kept the dopamine pumping and showcasing classic rock, punk, funk, blues, prog rock, country, and jamband influences. They all blended seemlessly into each other, and for those who think the highest musical inspiration comes from licking a piece of chemically treated paper, we needed none of that to enjoy this show.  The Denizens of the Bowl were amped up and wild. The band-audience synergy fueled squaredance lines of happy transportative dancing which erupted and snaked along the floor, literally grabbing people to join in the big ol’ party going on. Tonight they proved that they still have the tightness and the  glue that enabled them to perform on the high level that originally earned them their legendary reputation.   We hope we haven’t seen the last of them, and are looking forward to another reunion soon.

After a short intermission, and as I threaded my way back to the front by the stage, the Zen Tricksters came on, accompanied by guest saxophonist, Kenny Brooks, for one of their rare reunions that touch down every year in January at the Brooklyn Bowl. When Tricksters, with Jennifer Markard on vocals, Jeff Mattson on lead guitar and vocals, Tom Circosta on  rhythm and lead guitar as well as vocals, Klyph Black on bass and vocals, Dave Diamond on drums and vocals, and  newest Trickster, Peter Levin of the Greg Allman Band, and Blind Boys of Alabama on Keyboards and vocals,  plugged in, all hell broke loose.

It was  the most titanic, thunderous,  explosive Shakedown opening I have ever heard, and it hit us like a freight train.  The floors of the Bowl shook, jaws dropped,  electromagnetic reactions combusted, and  a thrilling ride ensued. “You tell me this town ain’t got no heart. Well, well, well, you can never tell,” and the audience responded in kind  singing the words along with the Tricksters like one beating heart in unison. Rarely are bands able to spawn a fanbase so loyal that it’s almost as though no other music in the world can compete. This became readily apparent from the get-go, as their loyal fans  flung themselves into waves of rapturous whirling, almost from the first notes played.

Klyph Black bass bombed out of the gate so hard that you could see glasses jumping on the bar in time to the music. The Tricksters, who’s members have gone on to play with DSO, Phil Lesh,  Donna Jean Godchaux MacKay, and so many other notable artists, seemed loose and totally in the moment, clearly reveling in the collaborative  near-telepathic  alchemy  of the band.

Seeing Red, a searing original Zen Tricksters nugget composed by Markard and Mattson, and as yet unrecorded, was up next.  Jennifer Markard took the lead on this sizzling blues number, strutting to the edge of the stage and singing  with raw, hot buttered , untamed  ferocity, about deceit and regret. Markard really knows how to  connect with the audience. Levin then jumps into this conversation with simmering blues inflected runs, elegant hot licks and  digressions on the B-3 organ, as if literally pleading with Markard.  Levin’s playing reminds me of Brent Mydland’s at times in its richness, punch, and color; add a few fat slabs of New Orleans marbled chords thrown in for good measure, and you have a vivid vignette of love gone bad.  Throwing more firewood into the conflagration  was an amazing and precise solo run by Mattson, full of bluesy and eclectic jazzy dances up the fretboard at breakneck speed. Mattson is the consummate musician, with so years of many musical styles at his disposal.

Next up, Klyph Black supplied  jolts of energy and effervescent lead vocals on Hoodoo, a barn burner of a song, and one of his originals, solidly anchored by Dave Diamond’s infallible grooves from the Tricksters Holy Fool album. I would like to hear more of Black’s vocals in the future, it is in equal measure foggy and gritty and drives the lyrics to their foregone conclusion. The opening guitar riff by Mattson cuts a deep and funky groove, and Tom Circosta’s spot on rhythym keeps the good times rollling. Circosta never slows down or misses a beat, or an offbeat,  and he knows how to keep the energy rising. Arise, was a fresh, fun, and relaxed  calypso tune  that  I wanted to bottle and take home. Kenny Brooks  took the lead and howled with the most passionate and swinging style of any horn player I’ve  heard. He played with agility and  funky rhythmic dexterity, prompting sinuously long conga lines that snaked across the dance floor.

No one stepped on anyone else’s toes in this lineup, which is not so easy when you have horns and the full band in the mix. A left turn into Estimated Prophet found Jeff Mattson pushing the envelope (Mutron, that is) on its signature 7/4 rhythm, which is generally a bar of 4/4 and a bar of 3/4, which combined to stagger our senses and play with our neural networks and caused a chain like pattern of dancers flowing and dancing to the momentum. When the word “California” was sung, the crowd yelled as the image of it, golden and glowing,  seemed unbelievably sweet given the frigid temperatures of the evening outside the Bowl, and the band flowed effortlessly into a tight and bopping Eyes of the World.

Levin’s gorgeous, soulful, and refined piano prelude to Gregg Allman’s Ain’t Wasting Time No More, written by Gregg Allman and released on the Allman Brothers Eat a Peach album in 1972, led us into this blues-basted classic about resilience after loss, and seizing the day with a swinging tight beat held down by Dave Diamond on drums. Tom Circosta’s  vertiginously steep yet precise slide guitar added real Southern comfort to the song. Circosta’s timing and musicianship are unsurpassed.

Another highlight of this show were Dave Diamond’s clear and fluid vocals on Where You Want to Be, an original number of his off the Love Surreal Tricksters  Album.  This progressed into Glad by Traffic, featuring perfect symmetry between the dueling guitars of Circosta and Mattson. Let It Grow flowed effortlessly, with insight that can only come from repeated performances of the music  with all of its time and chord changes and intricatly entwining melodies. This morphed into a molten hot Viola Lee Blues, with vocal harmonies  by the band.

It is rare that every member of the band can sing and harmonize so well. Mattson spun electrifying fractal guitar runs that emitted brilliant jazzy harmonies, color and light so masterfully that it took a few minutes to realize that he was pushing the tempo up to eye popping speeds. The band was brought back for an encore after pandemonium erupted, and the crowd did not stop cheering.  Jennifer Markard and the band stepped out for a wicked and sizzling White Rabbit encore. Klyph Black’s incessant bass lines anchored this excursion into the unknown, while Markard strutted and pivoted onstage delivering Grace Slick’s anthemic dark and piercing lyrics, pushing us out further and further onto the precipice, and taunting the us to question whether we can indeed pass the acid test?

If I had any criticism of the show it would be that the lighting, although tasteful and artistic at times, was too low, and there were moments I could barely see the bands. However,  it was a rare  treat to see this incarnation of the Zen Tricksters with Kenny Brooks. It was a very memorable and magical evening, and the crowd  was left elated and exhausted, grateful to have enjoyed the  reunion of these two very special bands.