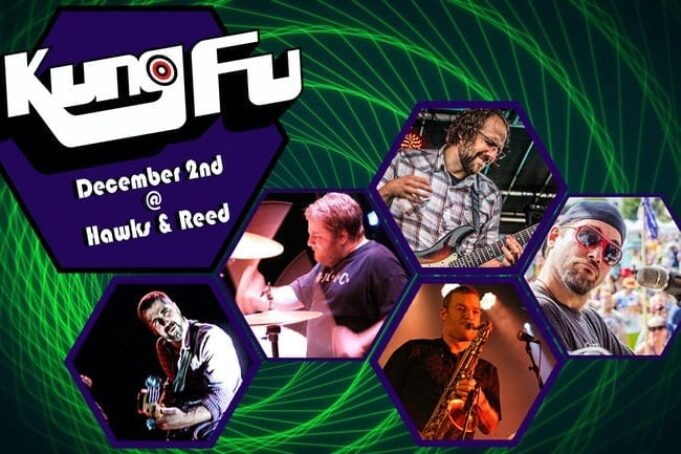 Story and photos by Kelly D

What do you get when you cross the stellar musicianship of Steely Dan, the party vibe and sheer boogie of Funkadelic, and a heaping helping of the stomping muddy space rock of Hawkwind thrown in there for good measure? Why, you get Kung Fu- a band from Connecticut composed of Chris DeAngelis (bass), Tim Palmieri (guitar), Beau Sasser (keyboards), Rob Somerville (sax), and Adrian Tramontano (drums). They rocked Hawks and Reed Performing Arts Center in the heart of Greenfield, MA after a set by Keepers of the Vibe.

Inspired by the Mahavishnu Orchestra and the Weather Report, as well as the eclectic talents of Frank Zappa, the members of Kung Fu describe themselves as creating “extreme funk” and they certainly deliver. Unfortunately I missed the KotV as I was enjoying the winding down of Seymour’s $4 Draft Week, Seymour being the pub conveniently located across the street from Hawks and Reed.

My crew got into Hawks and Reed after the first or second song of Kung Fu’s, and then. . . It. Was. On.

I had first seen Kung Fu earlier this year at Wormtown Music Festival when they performed a  blistering set on the main stage- in all definitions. Not only did they kill it, but it was also in the heat of the day with the angle of the sun positioned just so that the rays were shining directly on the band members’ faces and their revelers’ backs. No one was safe from the get-down nor the sweat and temporary blindness that came with it.

A lengthy jam of Steely Dan’s “Hey Nineteen” helped close their set and since I’m a diehard Dan fan, it solidified my love of the Fu. I had to have more. I was eager to see them again when the external circumstances were a bit more comfortable and Hawks and Reed proved to be the perfect venue. Not only is Hawks and Reed positioned directly in the heart of downtown Greenfield (my hometown), but the first floor venue is a spacious room in which to dance with fervor.

I swirled around, unintentionally mimicking the purple, red, blue, and green stage lights reflecting off the exposed brick walls. I kept seeing (and hugging) people I knew from the vast yet tight-knit Valley music scene enjoying the show in their own way. Some were dancing together, some by themselves, some just nodding along and keeping their eyes fixed on the musicians, some were off at the bar imbibing a craft cocktail or microbrew. The important part was that no one seemed bored.

And that’s the thing with Kung Fu: it’s always good!

I’ve experienced Beau Sasser’s organ noodling at Bishop’s Lounge Funk Nights many a time and it was great to see him on an actual stage, looking much like a groovy hippie with a cloud of shaggy brown hair about his head. I made my way to the front of the crowd to get a better look at everyone.

There was Tim Palmieri on guitar, stage right, displaying his nimble fingers up and down the fretboard. Chris DeAngelis, tucked between Beau’s cocoon of keyboards and Adrian Tramontano’s drums, provided some excellent heavy bass lines to drive the dance-y vibe home.

Towards the end of the show, I positioned myself in front of Rob Somerville blowing on his horn and Tramontano holding it down on the drums. (Yes, I was grateful to wear the earplugs I always carry with me.) My cadre of lady friends and I grooved and twirled to the soundscapes Kung Fu gave us with each tune they played. We even got a jammy extended encore after the band left the stage and we loudly begged for more. Curfew? What curfew?

Whether it be a festival set or a more traditional venue, and you want to have fun while digging a band whose members bring the party in a big way, always be sure to check out Kung Fu when they’re out on the road. Hard times may have befallen the soul survivors, but they’re doing their best to keep the funk alive.