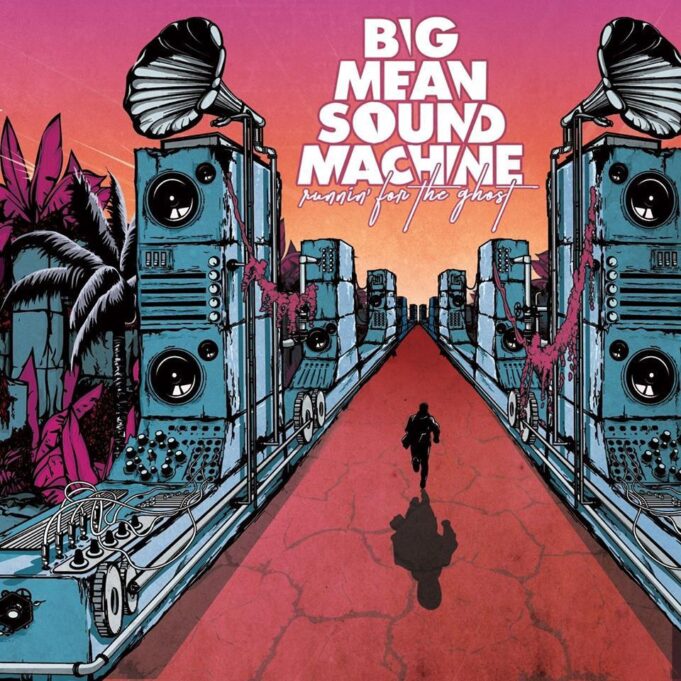 The nine-piece funk army Big Mean Sound Machine returned to the Root Cellar in Greenfield, MA this past Friday for another ripping night of heavy, heady dance music. And a packed dancefloor it was!
The band is often promoted, mostly by venues, as an Afrobeat band but that would only tell a part of the story. Indeed, this band’s sound and style contain many ingredients in its brew. The rhythms are firm in groove and reflect not just the inspiration from West Africa but Big Mean’s beats also respect the Brazilian and Cuban roots of key members of the band.
This collection of incredible musicians readily present a lot of different elements to their concept. What immediately grabs you is the earth-rumbling bass of Angelo Peters underpinning the line-up. Perussionist Lucas Ashby’s bag of tricks include utilizing a foot control for his shekere, help provide steady polyrhythmic bliss. And kit drummer Andrew Klein is a tastefully sane madman. The trombone/baritone/trumpet frontline of horns bring extended jazzlines that reveal fine lyricism, with some bluesy Ethio-esque moods. Particularly, trombonist Alicia Aubin’s solos are powerful and tend to build in intensity.
This particular Big Mean throwdown, the fourth or fifth at this venue (who’s counting?), brought back the familiar face of Andrew Linn on trumpet. With personnel spread across the Eastern US, the gang maintains a unit that is flexible all up and down the East Coast. Down a guitarist (and mini-Moog coaxer) with one guy in Miami, the two guitars dropped to one on this night, namely Ray MacNamara and his scintillating licks flowed all night from a river that connects from Jimmy Nolen to rock to soukous. The Moog and keys were blissfully wiggy and along with the harmonic magic of the horn section there is always enough in this band’s music to appease the psych and out-jazz folks. Heads gotta groove too!
Most of the songs played were from their new album Runnin’ For The Ghost, released in 2017 on Peace & Rhythm. There were a few songs from their earlier albums, as well as a new tune, “Life In America”, with more than a little Fela spirit. “Wolfpack” is always a classic, as well as “The Egg,” a tune as psychedelic as it gets while still keeping a serious dancefloor.
This band is one of the tightest groups I’ve seen, a very special blend of talents and styles, bringing us way beyond the advertised Afrobeat influence. They could have you in a trance à la “Brown Rice” (Don Cherry’s cosmic jazz classic from ’75) on one tune and grooving hard to some Krautrock-meets-Afrobeat synth/bass attack the next.
And of course, the always captivating rumba-inspired jam of the Klein/Ashby team was another show-stopper. It gives the rest of the band a chance to grab a beer at the bar while these two go from sick groove to sick groove improvising with each other. Those drummers work fucking hard!! Another fantastic BMSM show at the Root Cellar! Peace & Rhythm DJs were there too spinning psychedelic tropical sounds direct from vinyl.
I’ve seen Big Mean Sound Machine on several occasions all over the Eastern US and they always bring a party. Constant road warriors, the group just finished a slate of shows with Bella’s Bartok and are now embarking on a tour that will take them West. Everyone who has seen this ultra-tight and creative funk big band has come away a fan and wanting to see them again and again.
Catch them in your town soon.
Big Mean Sound Machine tour schedule here: https://www.bigmeansoundmachine.com/tour
Pick up the latest album on vinyl or digital.
To submit a story or to just say hello, email us at [email protected]
Check out the Live Music News and Review.com Facebook page for updates and announcements.