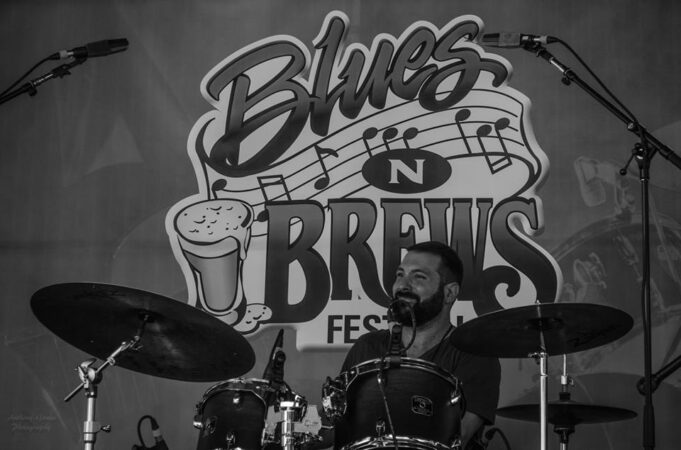 Westford Blues ‘n’ Brews Festival
Westford, MA
August 19, 2017
Story by Eric Sutter
Photos by Anthony Gomes IV Photography
To submit a review or story for consideration hit us at [email protected]
Check out the Live Music News and Review.com Facebook page for updates and announcements.
The 2-day 16th annual Blues ‘n’ Brews Festival at Nashoba Valley Ski area in Westford, MA featured 50+ regional craft brewers with the Westford Rotary Club serving as hosts.  All proceeds from the festival are distributed to various charities and organizations locally and regionally.
Day One began with the Boston Blues Challenge winner, Grits and Groceries Orchestra.  Carter Alan from Classic Rock radio station WZLX(100.7) emceed the event.  The food court served BBQ to Greek food… water and lemonade were popular on the hot day as the Delta Generators turned up the heat with roots rock and delta blues.  Hudson Valley base Chris O’Leary Blues band rocked the blues with a scorching set of Chicago blues.  The blues is a living history… from the Delta to Chicago and to Canada in the case of Anthony Gomes.  From Toronto, Canada but St. Louis-based, Gomes began playing guitar in his early teens influenced by B.B. King, Buddy Guy, Clapton and Hendrix.
In Chicago, Gomes won the first annual Buddy Guy Legends “Best Unsigned Blues Band” competition in 1998.  He released his debut CD, Blues In Technicolor with accolades from Blueswax magazine and the Blues network.  His achievements won him the “Jimi Award” for his 2013 CD Before the Beginning.  His latest, Electric Field Holler, has kept the blues flame burning bright in the new century.  His inspired guitaristics and the sturdy musicianship of his rhythm section plant him high among guitar innovators of the modern blues.  Just “Listen to the Universe” and you will see why.
His heavy cut, “Turn It Up!” proved to be a blues audience delight.  Gomes has a blues soul and a rock ‘n’ roll heart.  His live performance roared with guitar pyrotechnics on “Back Door Scratchin’.”  With spirited passion, he encored with the autobiographical “Blueschild” with finger-tapping improvisational prowess.
Blues promoter Don O’Dell’s Legends filmed and recorded the blues artists.  O’Dell hosts blues legends out of his theater in Palmer, MA.  Blues guitarist Chris Fitz played music on a side stage between the heavy hitters sets on the main stage.  A guitar raffle gave away a guitar signed by the bands at the 2017 Blues ‘n’ Brews Festival.
Headliner Nikki Hill is an impassioned R+B singer from North Carolina.  Since her 2013 debut Here’s Nikki Hill, she has delivered an explosive live show with her fast-forward approach to American roots music.  R+B music is one of the precursors to the hybrid

rock ‘n’ roll genre.  Hill’s voice is pure R+B soul mixed with the honesty of a blues shouter.  She is dynamite!  He sultry side expressed the sweet soulful Barbara George song, “I Know (You Don’t Want Me No More).”  Her own “Oh My” and other songs from her latest CD, Heavy Hearts, Hard Fists will make you believe in Rock ‘n’ Roll again!  Both Anthony Gomes and Nikki Hill are surefire stage show favorites.

With a spirited drumbeat, she made roots music happy with the audience who danced expressively to covers by Chuck Berry with “Sweet Little Rock ‘n’ Roller” and the call and response Gary U.S. Bonds’ “New Orleans” which brought the house down.  Her voice packed a powerful punch… and the kids bounced along in a nearby inflatable bounce house.  Catch a local blues show and don’t forget to boogie!
From the WestfordCAT video channel:
To submit a review or story for consideration hit us at [email protected]
Check out the Live Music News and Review.com Facebook page for updates and announcements.