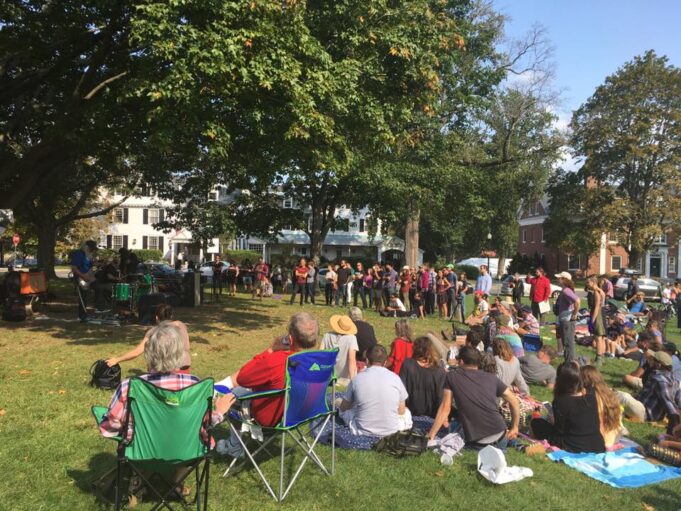 What do you do when you get a hot tip that the noise rock icons in Dinosaur Jr. are going to play an unannounced matinee show in their hometown of Amherst, MA?  You get your ass in gear and hightail it down there, that’s what.

On a gorgeous, sunny afternoon in the bustling college town of Amherst, Dinosaur Jr. performed its second album, You’re Living All Over Me, in its entirety to a small crowd on Amherst Common. The occasion was the 33rd anniversary of the band performing on that patch of grass in downtown Amherst for the first time. The band called itself MOGO, and played on September 9th, 1984.

If you have been unaware of punk rock history for the last 35 years, Dinosaur Jr. is primarily composed of the trio of J Mascis on guitar and vox, Murph on drums, and Lou Barlow on bass and vox. Their distinctive sound pioneered a style of lo-fi rock and roll throughout the 1990s and Western Mass is proud to call them local heroes. The band is known for “secret” shows- unannounced to the general public till the very last minute- in fact, the last time I saw the band was at Pearl Street Nightclub in August 2009 at yet another sneaky concert of theirs. After receiving the message, I contacted a few friends who are a few degrees closer to the band than I.

All systems apparently were go. I then told a handful of people to get there, despite some skepticism that the show was even transpiring due to lack of a public presence on the green. I knew better, and after a quick trip to the Black Sheep for provisions, we arrived to the band in full swing: the guys had started just about 3 PM as rumored. I would wager there was about 100-125 people on the common, some lounging on the grass with a blanket and beverages- clearly prepared- and some standing and rocking out. It was pretty trippy to see these legends of the punk scene just casually slamming through their seminal record underneath a tree rippling in the breeze on a sunny day, J Mascis’ Orange amps stacked on folding chairs.

I noted Lou Barlow was barefoot and Mascis was wearing a Cookie Monster shirt, modified with stoner-bloodshot googly eyes. Murph had cans on his ears to protect his undoubtedly already damaged hearing. Good for him. Celebrities- they’re just like us! https://www.youtube.com/watch?v=crrhknvT9gY As they plowed through all 38 minutes of their record, I meandered my way through the crowd, seeing more than a dozen people I knew from various interpersonal interactions- old coworkers, old flames, current friends- all taking this sight in their own ways.

Without much fanfare or audience interaction, the band abruptly stopped as soon as the members finished the last song- a cover of the Cure’s “Just Like Heaven.” No encore, no nothin.’ What more could we ask for, though? As friends and fans began to crowd around the band members, I marveled at what a great community we have in the Pioneer Valley. I even got to have a lovely chat with Barlow, who moved to my town a few years ago, about a particularly sordid news item that happened on my street last week.

All in all, it was a perfect way to spend a late summer day in Western Mass. If you couldn’t make it this time around, I’ll do my best to keep you in the loop for the next time. . . if you’re lucky.