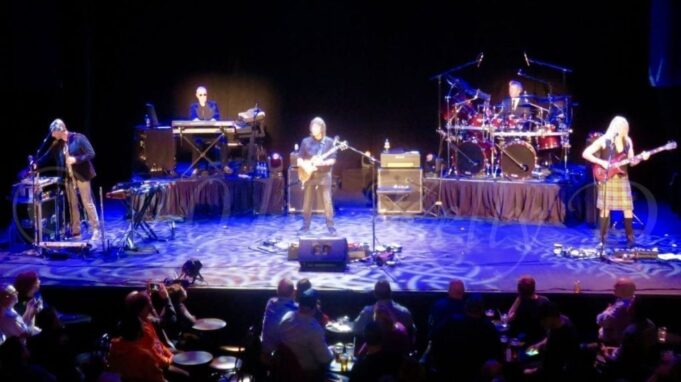 To see more of Kelly D’s photography of the Steve Hackett concert, check out her art page on Facebook at Vital Visions: Art by Kelly D

I had my first introduction with erstwhile Genesis guitarist Steve Hackett’s solo catalog thanks to the song “Spectral Mornings.” I heard the dreamy, ethereal track from his eponymous album thanks to Spotify’s algorithm a few years ago, the bytes and bits rightly guessing I would love it thanks to my voracious consumption of all things prog.

I had steered clear of Genesis’ body of work in my adolescence, wrongly assuming their whole discography was all saccharine poppy 1980s productions like “Invisible Touch” and “Follow You, Follow Me”- which are great songs, mind, but don’t at all reflect Peter Gabriel’s time with the band in the 1960s and 1970s. When I finally realized how weird and wacky and wonderful the earlier Genesis albums were, I absorbed the music and lyrics as fast as I could- even growing to appreciate tunes off Abacab and We Can’t Dance. I found out about Spectral Mornings a bit later, but said album is now ranked among my personal list of best of all time.

I was fortunate enough to catch Steve Hackett, guitar impresario, in Albany in November 2014 where the set list was entirely composed of songs from his time in Genesis. I even met him after the show and he kindly obliged me with a photo op. I resolved to see him again and got my chance at the Wilbur Theatre in Boston last night.

My companion and I took our seats in the mezzanine to an instrumental version of the jaunty “Every Day,” the opener from Spectral Mornings: this in itself an indicator that the show I’d seen in Albany and this one would be much different. The first third of the show in Boston comprised material from Hackett’s solo albums, including a recent release, “In the Skeleton Gallery.” It’s always a pleasant surprise to see more venerable artists like Hackett perform new material live; I’ve noticed a disturbing trend where many classic rock acts on tour rely on their bigger hits to pad set lists in a transparent grab for cash. I was glad to see Hackett take the approach of fellow beloved prog legends Rush, wherein their last few tours they boldly performed 8-9 songs from their new albums. Likewise, Hackett performed three songs from his upcoming album The Night Siren, scheduled for release in March 2017.

After the “Classic Hackett” portion of the evening concluded, Hackett introduced his main vocalist Nad Sylvan to perform “Eleventh Earl of Mar” from the last Genesis album he performed on, 1976’s Wind & Wuthering. He explained his band was celebrating the album’s 40th anniversary. The band went on to play the powerful instrumental “…In That Quiet Earth” and the beautifully melancholy “Afterglow” after a touching speech by Hackett, explaining the songs were dedicated to late prog bassist John Wetton, who played with Asia, King Crimson, and others. As a good friend of mine says, “It brought a tear to a glass eye” to hear the lyrics, knowing they were sung in tribute to Wetton:

“And I would search everywhere

Just to hear your call,

And walk upon stranger roads than this one

In a world I used to know before.”

Oddly enough, I had just finished a tiny painting of its album cover earlier that day, not realizing five out of its nine songs would be performed live!

Sylvan, whose vocals were put to excellent use when I saw him last in 2014, singing both Peter Gabriel and Phil Collins songs, traded off singing duties with drummer Gary O’Toole and even left the stage entirely during some of the extended instrumental bits. O’Toole looked snazzy in a suit, providing a stark contrast to bassist Nick Beggs in front of his drum kit, rocking out with his trademark long platinum blond hair and kilt. The charismatic and larger-than-life Beggs, who I saw play last year (also in Albany) with Steven Wilson, occasionally got down on the floor of the stage to play his bass pedals by hand- a bold move for a man wearing a kilt. Multi-instrumentalist Rob Townsend and keyboardist Roger King held down stage right. Townsend truly impressed me with his apparently seamless ability to switch between instruments, playing the flute, soprano sax, and more with gusto. Kenny G ain’t got nothin’ on this guy. King quietly provided the synthy strains of classic Genesis tunes “Blood on the Rooftops” and “Dance on a Volcano” with aplomb.

Hackett was in fine form that evening, cracking jokes with the audience and responding to shoutouts from fans in the crowd. For example: he relayed to us a non sequitur regarding EPCOT and his observation that over the years, Britons have become more Americanized but Americans haven’t Anglicized. Then he paused and said with a smile, “This has nothing to do with the next song.”

As Hackett and his merry band of players capped off the evening with a rousing rendition of A Trick of the Tail’s “Los Endos,” he mused, “I’m still making noise for a living. That’s the main thing.” Indeed it is, Steve. And we’re glad you are.

To see more of Kelly D’s photography of the Steve Hackett concert, check out her art page on Facebook at Vital Visions: Art by Kelly D