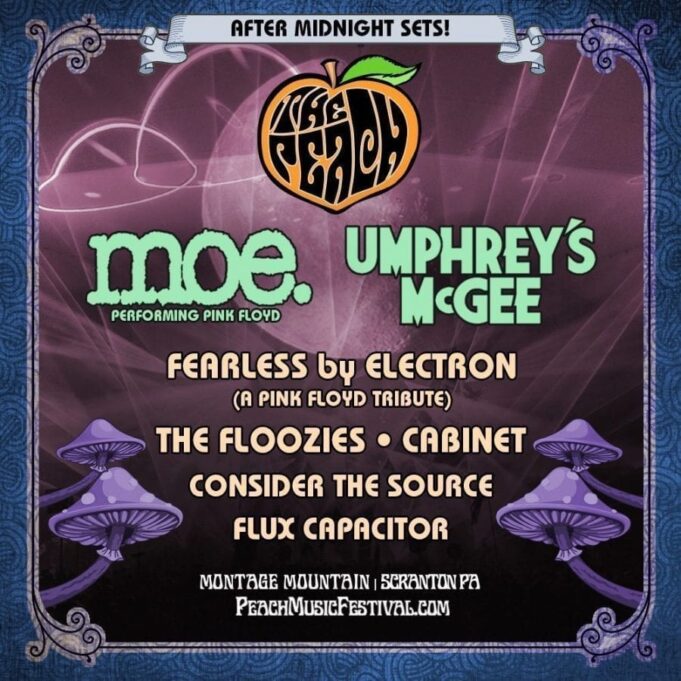 Check out the full gallery of photos on the Live Music News and Review.com Facebook page.

Daily Storms Add An Element Of Unpredictability:  “If the thunder don’t get ya then the lightning will..”

We’ve got reports and videos and photos and notes flying in like crazy from this past weekend’s Peach festival.  The bulk of the review comes from a first time Peach festival attendee but an experience live music freak, Eric J. Simon.  We also got a report from Hank Finkel and we’ll be integrating the two of them together.

With the East Coast gripped in a wicked heatwave, thousands gathered at Montage Mountain near Scranton, PA for the 5th annual Peach Festival. Having established itself as one of the larger festivals of the Mid-Atlantic region, complete with a water park, it seemed the best place to ride out the hazy, dog days of summer. Things went a bit off the rails even before the festival began when headliner Gregg Allman, who was scheduled for 2 sets cancelled a number of shows due to a hospitalization for “serious health issues”.

EJS: What a great festival, and I’m already looking forward to going back next year. It was made easier by the VIP and glamping ticket. We got there at 2p on Thursday, and my buddy and I separated because of different parking passes. I was greeted at the glamping area by a VIP staff and was assigned a tent. There are 5-6 rows arranged in a grid and the tents were tents arranged so that you could see the second stage directly from the tent, and that was a clutch maneuver.  Throughout the weekend we could see perfectly to the second stage from our tent, which was great.

So given our location there was no way to not catch music, the mushroom stage always had music going all weekend. Also, right there was the wave pool and you could see the stages directly from the water. It made for ‘clean hippies’ which was great, too!  The weather was stifling- with 90+ degrees temperature with a heat index that was well over 100 degrees. They did have three outdoor showers that were accessible and real shower houses that were a part of the glamping pass. Being in the middle of the whole festival via the glamping pass was really immersive and amazing. There was music I wanted to see from 12 noon until 2 AM every day!!

Friday night the seldom seen on tour Golden Gate Wingmen played with an all star lineup which includes John Kadlecik (Furthur, DSO, Phil and Friends) on guitar and vocals, Jeff Chimenti (GD50, Dead and Co, Furthur, Ratdog) on keys, Reed Mathis on bass (Tea Leaf Green, Billy and the Kids, and his new project Electric Beathoven) and vocals and Jay Lane (Furthur, Ratdog, Primus) on drums. Super fan Bob Jacobson reacted, “A short set, but with the weather, we’re grateful it happened at all! Highlights: A five minute jam to start the show before dropping into Sugaree, Huge jam inside of “It’s Alright” Huge jam inside of “What’s Become Of Mary” and The Ladder (as always!)”

They had 4 rain delays over the weekend where they shut down the festival and instructed everyone to head for cover, the shortest being 45 min and the longest being two hours.

EJS: Saturday night headliner was Claypool Lennon delirium- a great hard prog band. Opener included the Floyd classic Set the Controls for the Heart of the Sun.  They also covered In the Court of the Crimson King by King Crimson.  Also, Yes classic Close to the Edge in an instrumental version- the whole show was a prog rock bonanza. About 15 min before their scheduled end the rain ended their set…  HF:  The Claypool Lennon Delirium, a pairing of Les Claypool and Sean Lennon was sublimely weird and wonderful.

EJS: Trey Anastasio Band set began but was quickly ended by rain also- he did end up coming back but did lose some time. His second appearance resulted in the band totally ripping it to make up for the rain delay.  HF:  The biggest storm occurred Saturday night at 10PM disrupting Trey’s set and preventing Turkuaz from playing at all but for one song.

EJS: Afterward I returned to the mushroom stage to see Cabinet, who played til 2:15 and I was able to watch them from the tent, which included several special guests.

Dark Star Orchestra’s set was cut short on account of the weather, a couple of songs into their set. The song selection made it hard to ascertain what show it may have been- and at the end they announced that the set was adapted from a late 1980s show, therefore the shortened set had them taking some of the material out of the original tribute show.

Joe Russo’s Almost Dead was f’in great- musically it was a great lineup. As soon as they started I could tell that Joe Russo was the center of the action and in charge of the band. Alot of bands as you get lost in the music, there is someone who can bring you back in… for this band it is clearly Joe Russo, you can spend your whole time watching that guy, f’in fantastic. Their set included all Grateful Dead music of course.

I saw a lot of bands that I had heard of before but never seen: String Cheese Incident and moe and others. Umphrey’s was supposed to midnight but didn’t make it on until 1 AM or so because of the rain delays.

Sadly there was quite a distance between where we were and the third stage so we never made it out there.
We caught a tribute set of something called Brown Sabbath- from a band called Brownout from Texas- normally a Texas style jam band but instead they did a whole Sabbath tribute. It was a funk version of Sabbath, heavy on the bass plus a horn section- a really interesting funky take on the classic rockers. There was a lot roots Americana jam band vibes throughout the weekend. More rootsy than uber jammy.

HF: It’s is a curse of abundance is that there is so much good music at The Peach that it is impossible to catch it all. I can say that every band I caught turned in a solid, hi-energy performance and none seemed the least bit bothered by the heat. Strong crowds were at the mushroom stage for Pigeons Playing Ping Pong, The Motet, Twiddle, Anders Osborne, Karl Denson’s Tiny Universe, and Cabinet (who played one set on each of two different days).

With Greg Allman sitting this one out, the headliner had to be redefined a bit and became the Allman Brothers Family Incident which included members of Greg’s band, String Cheese Incident, Oteil Burbridge on bass, Jaimoe and Butch Trucks, Marc Quinones and others.   HF:  The impromptu band was rounded out by vocalist Lamar Williams Jr., and keyboardist Bruce Katz. This group of musicians, minus The String Cheese Incident also form the band Les Brers, which was already scheduled to play The Peach.

Flux played a major late night set and celebrated the birthday of keys man Mike Specht.  Within their extended set they performed the A side of the first album by the Doors.

Full audio of the the Flux show:

EJS: The festival was run really well, and with VIP passes we got treated really well.  The schedule was set up so that even if you wanted to see things that happened at the same time you could easily get from one stage to the other and catch a good portion of each band. The views were great, and the assigned seats were 12th row at the main stage. It was mellow, everyone was helpful, so- what a great festival and I am looking forward to going back.

HF: As far as the venue, I heard of no traffic or parking nightmares, the staff was very helpful, friendly and easy-going. Vendors were plentiful with a large variety of food to choose from. It appears that The Peach has become one of the staple, large scale east coast festivals…and rightly so! They are doing something right!

Check out the full gallery of photos on the Live Music News and Review.com Facebook page.