It was one of those perfect summer nights when I got to the Pines Theater at Look Park in Florence, MA for the much anticipated memorial/benefit show, Jeff Fest.  The show touted a line-up consisting of a veritable who’s who of Pioneer Valley musicians and bands.  Jeff Fest was created to celebrate the life and music of the late Jeff Martell, a Western Massachusetts singer-songwriter who tragically died in a car accident in January of 2016. 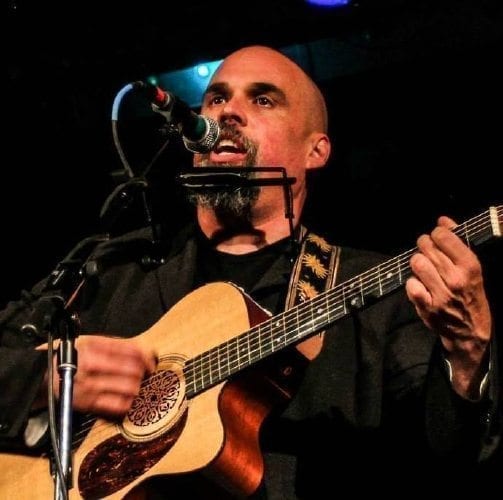 A self-proclaimed “New Age Psychedelic Folksinger and Kirtan Wallah,” Jeff brought his unique brand of solo “Acoustic Groove” to venues across New England for over 30 years.  In addition to being an accomplished musician, Jeff had a passion for Kirtan, a kind of devotional yoga that involves call-and-response chanting.  Jeff was an integral part of the Pioneer Valley music scene, known for his work with the Green River Festival in Greenfield, MA and for his work at the Easthampton Country Dance and Song Society.  As I walked around talking to people at the event, and as I listened to the stories being told during the performances, it was obvious to me that this man had touched many lives in a significant way.

The event started with an introductory speech by Jessica Lapinski, Jeff’s partner.  She set the tone for the evening, saying, “This is not only a tribute to Jeff Martell, but I hope this story is also a reminder to all of us, to listen to those signs from the universe, to live in the moment, and appreciate the loved ones in our lives and to tell

them so. To celebrate this gift of life we have all been given…. to enjoy the Music, to focus on the good, to love the people around us….And as Jeff would say….’Make love often, do what makes you happy and don’t forget to pray!'”

Jessica told me how “every band or musician on [her] list had a personal connection to [her] and [her] relationship with Jeff. Almost everyone on [her] list said yes, [she] had no idea Tor was going to be able to have them all play.”  Some examples of Jeff’s connections with the bands in the lineup include LuxDeluxe and And the Kids, both of whom the couple had discovered together and watched develop in the local scene and beyond.  The show also represented the many communities that Jeff was a part of, including the Country Dance and Song Society and contra dance community (represented by the Gaslight Tinkers), the Recovery Community (represented by Selfish Steam) and the Kirtan community.

Each band had one, maybe two songs, so the turnover was quick.  It was amazing how smoothly the production went, and it’s a real credit to organizer Tor Krautter (of the Rev Tor Band), who steered the ship with finesse (to be fair, he has gotten a lot of practice from putting on “The Last Waltz Live” productions all over New England).

The music kicked-off with the Rev Tor Band performing Jeff’s signature song “I Got a Guitar,” singing “Make love often/do what makes you happy/and don’t forget to pray.”  The music continued on the mellower-side with Trevor Healy and Adam Bosse playing melodic instrumentals on both acoustic and electric guitars.  The Nields then did a lovely version of their popular song “Easy People” in front of what I noticed was a “World Peace” sign.

The Dead Collective then turned the mood of the evening, getting people up on their feet and dancing.  Immediately following, The Rev Tor Band took the stage, morphing into the East Creek Band, of which Jeff was a member for several years.  The reunion was cathartic for the crowd, who ate it up, as the band played two of Jeff’s songs, “PC blues” and “Welcome to New England.”  Actually, many of the bands played Jeff’s songs, with the Rev Tor Band also playing “Ring Around The Moon.” Drew Lopenzina did “Long Road Ahead,” Harp played the song “Thunderstorm,” and The Gaslight Tinkers did an amazing version of his song “Crossroads.”

Long time friends of Jeff Star Drooker played two original songs: A Song Forever and Human Sundial.   He gave a wonderful performance that was both heartfelt and very entertaining

oustic, electric- you name it.  I think it must be a reflection of the man’s wide tastes and love of music, and I appreciated the eclecticism.

Thee Arcadians (Jessica’s son’s band) rocked their set, really changing the tenor and speed of the night with some melodic harder rock, or what they term “psychedelic garage rock.” Then it eased back into a Kirtan session, featuring an eerie guitar and chanting in Sanskrit, with Jeff’s good friend Libby leading. The call and response of the Kirtan seemed as soothing and full of emotional release for the crowd as it was for the leaders and musicians themselves, repeating after each other “Let it go.”

The Gaslight Tinkers were one of the highlights of the night for me.  I hadn’t seen them before, but had heard a lot about them. They’re a bit of reggae with a fiddle- a combination of jam, Americana, Celtic music.  They seemed to throw together a bit of everything into the mix and, while that doesn’t always work out for the best, it was like when spices in a dish work to complement each other in just the right balance- it was great.   The crowd clapped along enthusiastically during fiddle player Audrey Knuth’s riveting solo.

Selfish Steam took the stage next, and got the crowd moving again with a jammy rock set.  Then Americana band the Boxcar Lilies delighted the audience with captivating vocal harmonies, giving everyone a break from the dancing as we just listened and enjoyed.

LuxDeluxe was next, and boy did they get people dancing with some good ole’ rock and roll as lead singer Ned King strutted and jumped all over the stage. I have to say, I love these guys; ever since I saw them at the Green River Festival I can’t stop listening to their music.  They call their sound “joy rock” and it is evident in the

crowd’s reception that that is an appropriate moniker.   And the Kids came on after LuxDeluxe for one song.  They shifted the show’s gears again with their signature indie sound.

Healther Maloney’s beautiful voice was one of the last things I heard from the show. Unfortunately, I missed the Lonesome Brothers, but I made it back in time to catch the musicians all gather on stage one more time for an emotional farewell.

All in all, this event was not only an astoundingly packed night of full of diverse, talented musicians, but it was also completely inspiring.  It filled my cup. I just hope I can have 1% of this celebration when I die.