I showed up to the relatively new music spot, American Beauty, this past Saturday, late into what was the first ever Happy Owl Fest. Despite that fact that I was late to Polyvamp’s set, sometimes walking into a show after it’s already getting started is awesome because nothing beats hearing the volume of some kind of cool music, or awesome jam, slowly rise as you get closer to the heart of things.

The feel you got from Polyvamp, which has six members, including a percussionist and a tenor sax player, is a cool quantitative factor because of the extra instrumentation. They morphed lively funk into really spacey, really out there grooves. It left me thinking of something intergalactic as they played on. 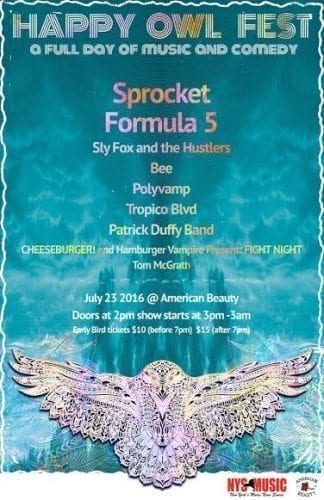 Sly Fox and The Hustlers took up next, and everything got really heavy. Their sound is distinctly blues, minus the southern influence – and kicked up a couple notches. Someone actually mentioned the lead guitar player looked just like Warren Haynes, and once the image of the likeness is there it doesn’t go away. But he was a clear frontman, with a voice that reminisced their hard blues genre without cliche-ing it.

Formula 5 was the band I’d known previously, by their proceeding reputation, at least. Coming out of Albany, they’ve made a good name around the Northeast-this was attested to by a nice increase in audience by the start of their set. When they really got going, it was impossible not to pick up on a continually returning point of euphoria to their jams – a very bright, upbeat point that tips over into climax. They treated the beyond-invested crowd to a couple of clearly pleasing, and real fun covers.

Brooklyn based group, Sprocket was up next. I thought they were a great group. Even though I can’t speak to other shows for comparison, I had to imagine this was a nice set for them. On the technical level, they were first reminding me of something close to Primus-purposefully complicated riffs and adventurous melodies that sometimes pointed towards the humorous. All four members really held their own up against one another, so that you had a multi-member improv work steering the base of their songs into sometimes jazzy, sometimes more prog-rockish territory.

At one of their height’s of the set was a euphoric combo in The Beatles’ “I’ve Got A Feeling” sliding into Phish’s “Limb By Limb.”

The power trio Bee came on at 1am, alighting the early morning with another wave of energy. Bee underlines the phrase power trio, even if just because they have such a smooth feel between the three of them. I expected them, being a rock trio with sharp old school tones, to be heavy and clunky, but instead they were breezy and beautiful, with really wide-reaching exploration that I thought could go on for hours. This is a band that I will for sure be trying to find again sometime soon.

A perfect way to cap off Happy Owl Fest, and send off the last night owls out of American Beauty and back into reality.

Which, as I decided pretty quick, was a true success and awesome event all around, at least as I’m seeing from my vantage point. Lots of cool people to meet, that I could tell at multiple points throughout the several-hour show were all having a grand time. American Beauty clears all the checks for a great new place, for both music and just hanging out, even the front room, after Owl Fest concluded, was humming with lively patrons.