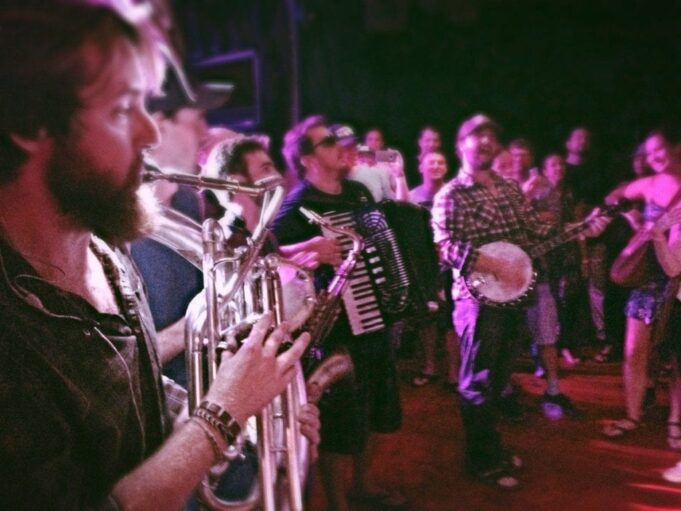 The Knitting Factory: Recovered Night One

The Primate Fiasco came out began to boom-chuck the title-track in their dixieland rhythm, and, incredibly, this opener took the crowd immediately on their first musically magical tour as it sped up quickly into an awesome Primates’ typical, trance-jazz breakdown.  In great part, The Primate Fiasco’s rendering of Magical Mystery Tour had an endearing quality, brimmig with a sense of both creativity and slight whackiness (important ingredients of anything Beatles-involved). This was the case for the next set of songs, “Fool On The Hill,” “Flying,” “Blue Jay Way” and “Your Mother Should Know.” These brought through the dreamlike quality integral to much Beatles music, but especially this record, and with it a lot of the danceable swing that we love the Fiasco for.

For “Hello Goodbye,” only banjo and tambourine were played, while all the band harmonized the vocals, the tuba player singing bass and the drummer singing a high-pitched lead. More of this jovial charm would come again a bit later in “Penny Lane.” In the meantime, Fiasco had some getting down to do. For “I Am The Walrus,” the band went full-on heavy funky, and topped off with an gnarly solo from the sax player. “Strawberry Fields Forever” maintained that blessed dreamlike atmosphere before propelling headlong into a very improvisational trance-beat jam, with tuba, banjo, clarinet, drummer and accordion player all bouncing their playing off one another furiously.

But the stand out was “Baby You’re A Rich Man.” When you listen to the original Beatles version, it sounds lik 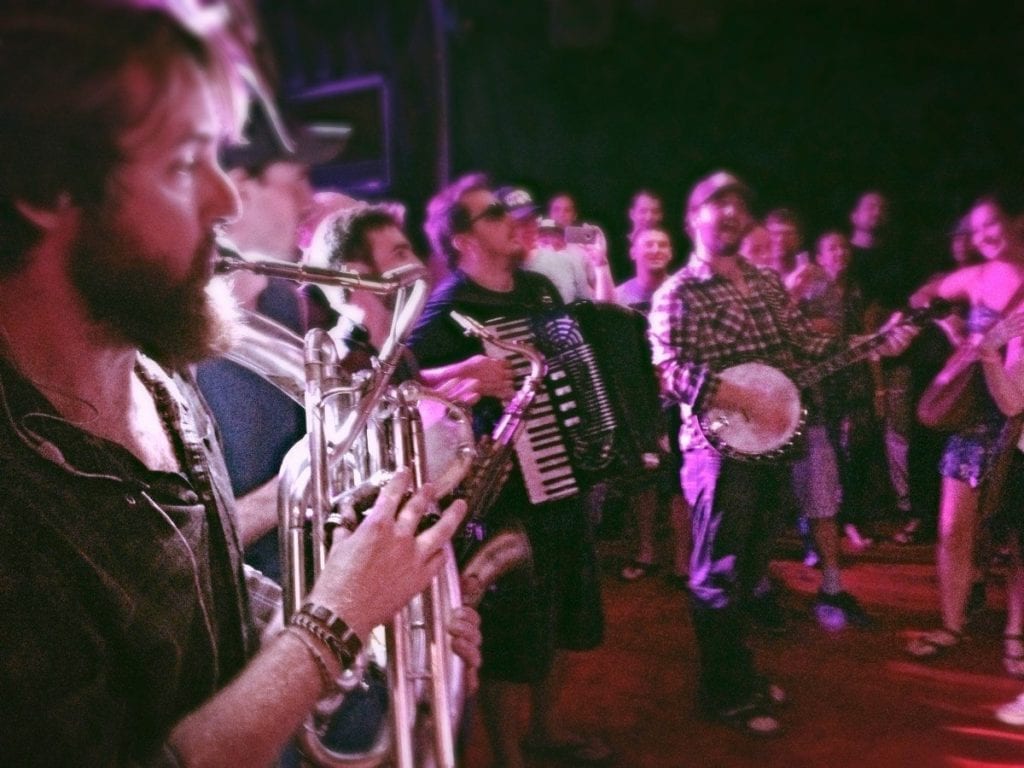 e musical material that could be extended and rocked out with some real fervor. Thank God for the Primates playing it, then–their version in this set smoked, morphing the tune’s rocking beat into their very own increasingly fast dixie-land swing rhythm, completely throwing the crowd over the edge.

And what a crowd it was, as only few songs in and nearly everybody in the little darkened den of the Knitting Room were matching the Fiasco’s energy and motion all the way. The band stepped off stage, in a very Beatles-esque moment, to be circled around and be joined by the crowd in a final, acoustic “All You Need Is Love.”  As they did this, their stage set was dismantled to make way for the tricked-out piano Marco Benevento would lead his band on to rock out to David Bowie’s Hunky Dory.

The first couple tunes, “Changes” and “Oh! You Pretty Things,” while succint, brought the rich grandeur that I was hoping to feel from someone, especially of Marco’s performing calibur, tributing Bowie. With him were his drummer and bass player, and Next was “Eight Line Poem,” which, on the record, is essentially just nice interplay between piano and guitar, and Marco did this perfectly with his bassist and fellow JRAD member, Dave Dreiwitz, who incorporated a wah effect to deliver some great soloing.

Of course, its Bowie being covered, so lead vocals comes to mind on the list of important elements to uphold. I think Marco’s voice worked great, not aiming for the sultry gooiness of Bowie but delivering instead a charming familiarity.

But then the real exploratorative musical improvisation that I was hoping to hear the band enfuse Bowie’s material with started. “Life On Mars” is a pretty tune on its own, but Marco and gang took it into an extra-beautiful jam that sounded much like the live improv found in the pianst’s own stuff. “Kooks,” short and humerous, came before another such crank-out, “Quicksand,” which first started out tributing Bowie’s heavy, rich song quality, then again slowly morphed into an awesome jam.

Check out the review of Night Two with albums by the Cardigans and Morphine here.

Things were only on the up. Now on the “B” side of the record, Marco’s trumpet player first lead the crowd on a jazzy swing through “Fill Your Heart,” and then the band hammered their way through “Andy Warhol,”  yet another swirling, chaotic vortex of power-trio intensity, whose core buzzed with Marco’s magic fingers flying across the keys. “Queen B” and   “Song for Bob Dylan” both beamed with more of Bowie’s slightly romantic, slightly grandiose character, the latter on which the backup singers sounded really nice. 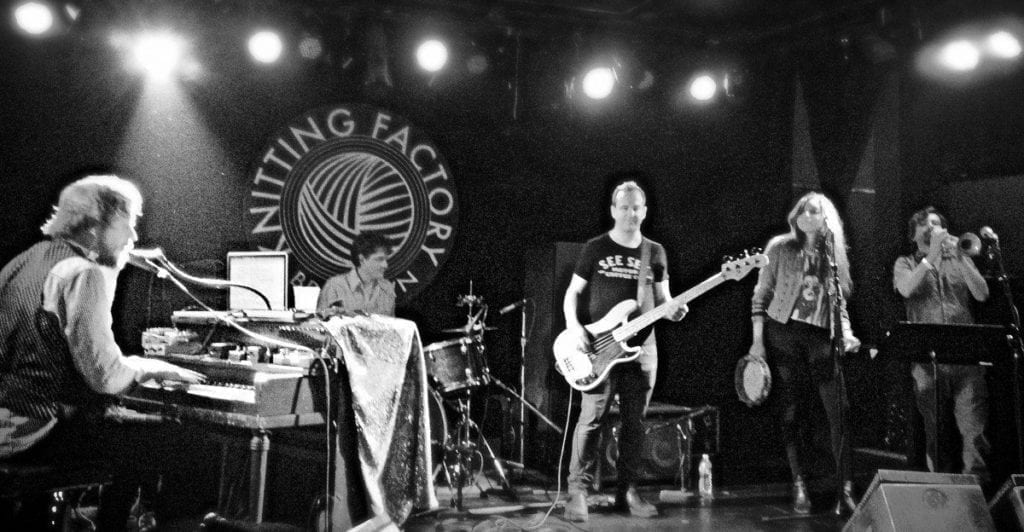 Finally came Bewlay Brothers, which on the record is really just a folky little diddy ender, but here at Recovered, treated by Marco and group, was revved up into a final blistering, rockabilly-oriented breakdown, piano keys again banging away again with such quasi-reckless frenzy.

To my and perhaps many others’ delight, Marco and band raged the first night of Recovered on and jumped right into a set of their own material. “At The Show,” a really fun, indie-pop track from his newest album came first before “Heartbeats.” This is a pretty acoustic tune written by Jose Gonzalez that Benevento has covered regularly for some time now. As soon as his band trekked into the heart of it, it was the unquestionable highlight of the night for me, with several peaks of power that made every other previous jam seem like they were leading purposefully up to this. They continued on through a few more bouts of incredible improv in “Bus Ride,” “Greenpoint,” and then a very new tune to close out.

A fantastic way to start off the Recovered weekend it was, with a splendor of musical and artistic complexity that would be closely matched by the other artists the following two nights.

Check out the review of Night Two with albums by the Cardigans and Morphine here.