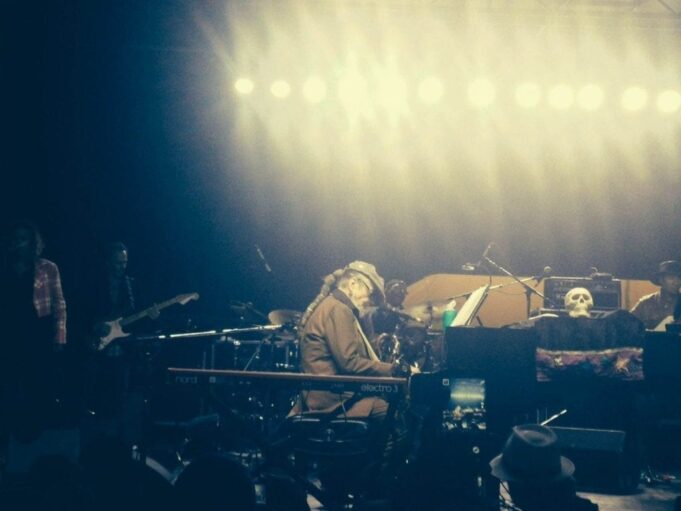 Dr. John performs intimate set for about 200 to close

Mac “Dr. John” Rebennack was in the right place at the wrong time Sunday night, playing a Crawfish Fest-closing set nearly three hours late and after a majority of attendees had gone home.

With his voodoo skull adorning the top of his grand piano and lightning rolling through the sky beyond, the New Orleans music legend and his band, The Nite Trippers, closed this Louisiana food and music festival in Augusta, N.J., for about 200 fans in an intimate setting.

The six piece band led by Dr. John and trombonist/musical director Sarah Morrow led the enthusiastic audience through gritty classics such as “Walk on Guilded Splinters,” his funky/jazzy adaptation of Louis Armstrong’s “What A Wonderful World,” and his seminal 1973 hit “Right Place Wrong Time.”

Nearly three hours after the festival was scheduled to end, Dr. John triumphantly left the small stage after performing “Such a Night,” as the band played the familiar refrain and the audience showered praise on the 74 year old who leans on two canes but still dresses as sharp as ever.

While menacing storms threatened the region most of the day, Crawfish Fest was spared any torrential storms. But after a day of Louisiana-style music and food that included another legendary Dr. John contemporary, George Porter Jr. and the Runnin’ Pardners, the festival-closing set never materialized on the main stage.

With a threat of thunder and lightning moving over the Sussex County fairgrounds, the audience dwindled and the good doctor never took the stage for his scheduled 5 p.m. performance. Soon, the people who had danced and enjoyed the main-stage all day long were told to leave the flat open field presumably due to the threat of lightning.

While some surely split and hit the road, others found Sister Sparrow and The Dirty Birds for a fun set at the Jager Pavilion. The Brooklyn-based soulful blues band, who recently released a new album, provided a fun alternative for the absent Dr. John.

But as the Sister Sparrow set progressed, soon a tour bus rolled up alongside the smaller stage and the speculation was on: Is the Doctor about to perform?

With Sister Sparrow’s set ending at 7 p.m. – the planned closing time of the weekend fest – a festival staff member confirmed it: “Call and text your friends,” the man said. “Dr. John is going to play right here on this stage.”


Patient fans let out a cheer when stagehands rolled out the grand piano, and those who stayed were rewarded at 8:30 p.m. when the band took the stage for a 90 minute set under the dry pavilion as the sky opened up the rains came down.

Dr. John and The Nite Trippers will return to the New York area for some dates in late-July and will play a free show at New York’s Central Park Summer Stage on Aug. 1 (with opener Amy Helm).