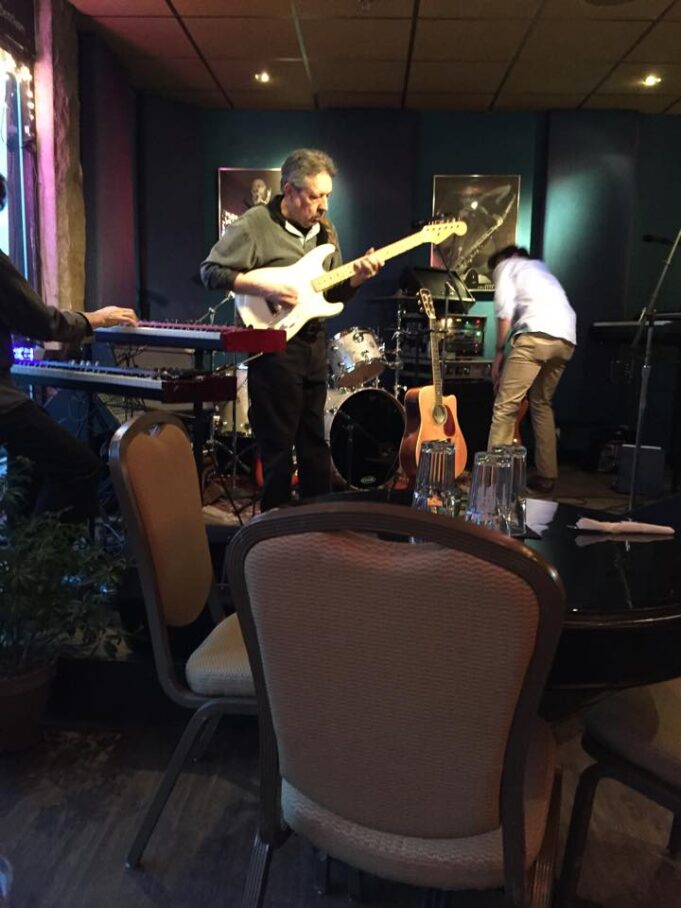 Way Up South brings their style of Southern Jam Rock to the new music venue.


There’s a new music venue in downtown Nashua, NH called Riverwalk Café and Music Bar and on Thursday, April 16th Way Up South was there to play their brand of southern jam rock in front of a good crowd of 50-60 people in a 90-100 person capacity room.  It was crowded but comfortable.  I arrived early with my boyfriend so that we could enjoy a little dinner before the show started.  What a great atmosphere!  The Riverwalk Café is an elegant, but casual space and not at all pretentious.  Perfect for a night out on a date or with friends.  The menu is only one page, but includes a nice variety of appetizers, sandwiches, salads, naan pizzas, and dessert.  We split a classic Pastrami Rueben: pastrami, swiss, sauerkraut, and thousand island dressing on grilled rye and a Chicken Bacon Rachel: deli-sliced chicken breast, bacon, swiss, cole slaw, red onion, lettuce, and thousand island dressing on grilled rye.  They did not disappoint!  For dessert we had a Hazelnut Crème Cake from the Dutch Epicure Bakery in Amherst, NH; heavenly!  There is also an extensive list of cocktails using top-shelf liquors so the drinks seem a bit pricey, but the Cosmopolitans I ordered were delicious, so it was worth it!

Enough about the food…how was the music you ask? Fantastic!  Way Up South certainly knows what they are doing.  Over the years, I’ve seen some jam bands pull out some rough jams, sometimes that’s what you want to hear.  Depending on the songs, the band, and the setting I love hearing musicians getting lost in their own music, loose and fast or rough and choppy.  It terms of Way Up South, this 6 piece band has the maturity and musicianship to weave in and out of songs with precision and finesse and still retain that loose spacey quality that comes with a jam.  I’m not familiar with a lot of Southern Rock songs, but many of the ones played this night I recognized, which makes this band very accessible to those unfamiliar with that musical genre.  The repertoire of songs the 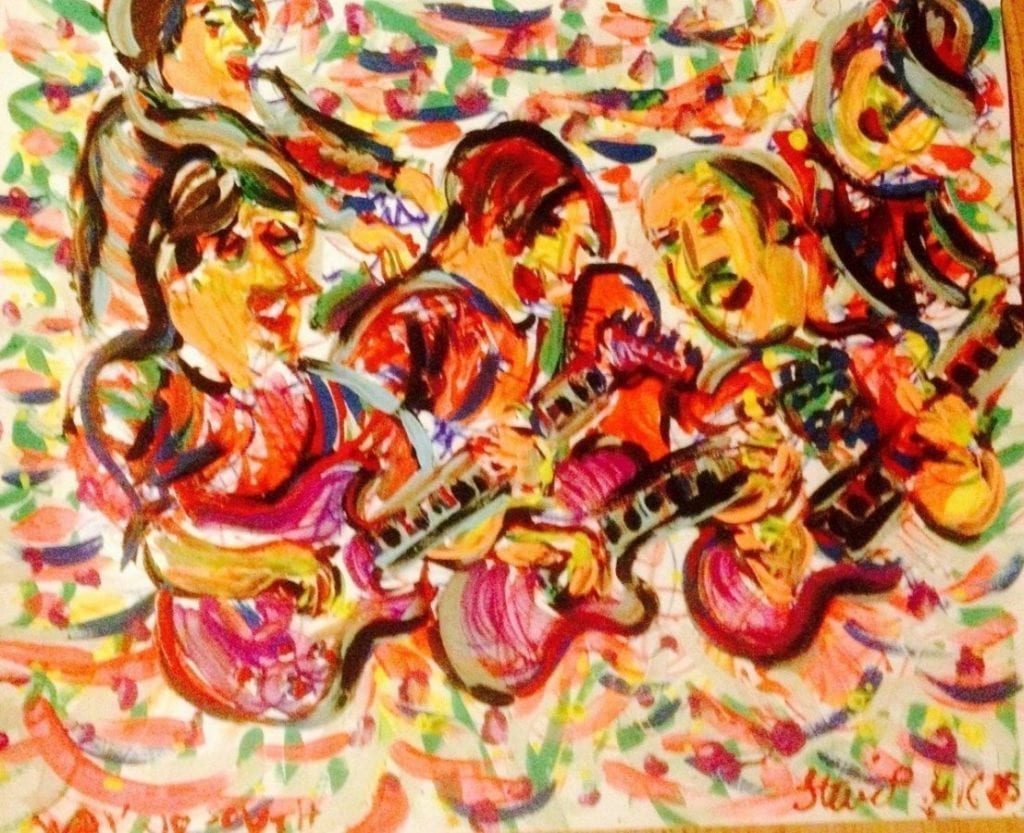 se guys know and how they take the audience out of their comfort zone and play songs in styles that makes them familiar and new at the same time is impressive.

It was also interesting during the evening to have Concord-native Steve Paquin do live music art. Working in acrylic ink and acrylics he captured the soul of the show in two different paintings during the different sets.  This is one of the pieces here.  To inquire about purchasing this or any of the other paintings Steve has created go to his FB page.

Here are some of the highlights of the evening.  They started out with an original song “Down Like Rain”.   It was a very blues driven song with elements of spacey psychedelia that was slow and sweet.  This was due in part to the guitar slide used throughout the song by Paul Ferguson.  My boyfriend, who also works in the music industry, also remarked that Paul plays his guitar rather high against his chest, something that you often see with some jazz guitarists.  It looks uncomfortable, but Paul seemed to be in his element.  A few songs in they brought out “Whipping Post” by the Allman Brothers.  This is a band standard and you could tell that they really started to dial it in at this point. The way the organ played off of the guitar during the jam in the middle and then the heavy guitars at the end really made this song.  I was thrilled when they started to play Little Feat’s “Willin'”, I’ve only ever heard it on Little Feat’s live CD “Waiting For Columbus” so to hear Way Up South’s version was a delight.  Way Up South played and Elvin Bishop’s song “Traveling Shoes” into a very unique version of “Turn on Your Love Light” originally written by Bobby Bland, but made famous by the Grateful Dead.  It had a heavy jazz vibe and not a version of the song you’d expect – it sounded like Love Light but with a distinct twist and a killer jam at the end to end the first set.

Way Up South began the second set with “Melissa” another Allman Brothers tune, very sweet and smooth.  A few songs in they played a song, “Ghost” which in my opinion showcased the signature sound of this band.  It had elements of country rock, blues rock, and psychedelic rock – very “Big Sky”.  Following this they played a song “Look Away”, which had me thinking that the jam they played towards the end would juxtapose nicely into “Going Down the Road Feeling Bad”.  A complete eye-blinker was the rendition of “Big Shot”, which was played nothing like the original by Billy Joel.  Again this song displayed the musical range of the band and went into a blues and jazz version of this song.  This was followed by another Way Up South original “Country Time”.

They closed the night with a song “Bong Hits”, which was a great ending to the show and being a weeknight it was understandable why the crowd had started to thin out half way through the second set, until there were only a few of us left in the café at the conclusion of the show.  It makes me wonder what a show on a weekend night with this band would be like.  I’m a little bummed that I have a previous 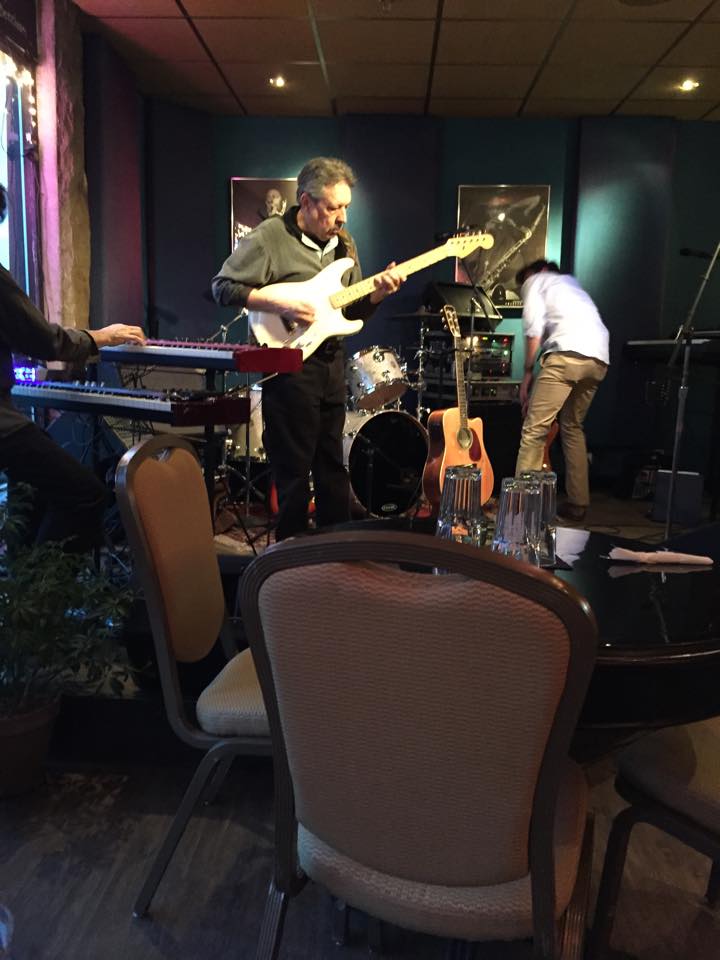 obligation, otherwise I would travel down to Falmouth, MA to see these guys perform at Grumpy’s Pub on Saturday, April 18th.  I was very impressed by the energy of the band and the incredible guitar work of Paul.  You start to ask yourself where did this guy play before he joined this band?  At times he made the guitar sing with simple guitar runs similar to Dickey Betts and Duane Allman and at other times complex phrases like Stevie Ray Vaughn and Warren Haynes and still other songs had the distinct “flavor” of Santana or Eric Clapton.

I had an amazing time and I look forward to catching Way Up South play in the future. I would also love to return to the Riverwalk for another show even if it’s to see another band.  The Riverwalk Café and Music Bar has only been showcasing music since last August, but it is clear that this little venue will turn into a hot spot for fantastic music.

Giving It Up for Your Love – Delbert Mcclinton

All Seems Funny – Way Up South

Until Then – Way Up South

Dawn On You – Way Up South

With a Little Light – Way Up South

Melissa – Allman Brothers (request for an expecting mother in the audience)

Through Your Hands – John Hiatt

Just One Night – Way Up South

Look Away – Way Up South

Set Yourself Free – Way Up South


Check out the review of Deadbeat at Harlows FEB 2015.