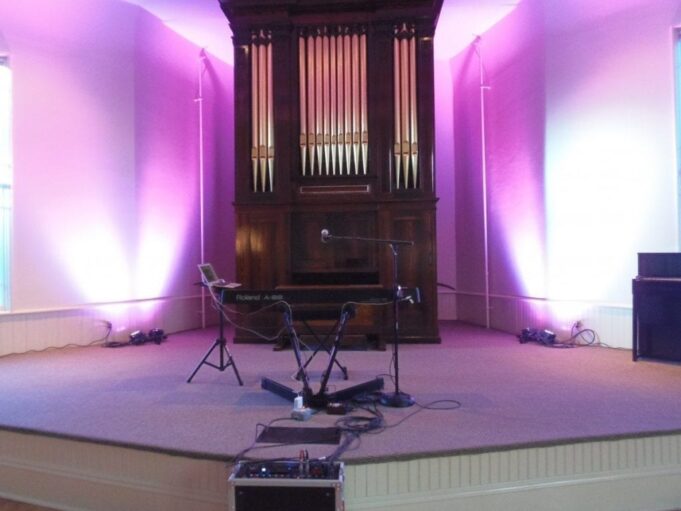 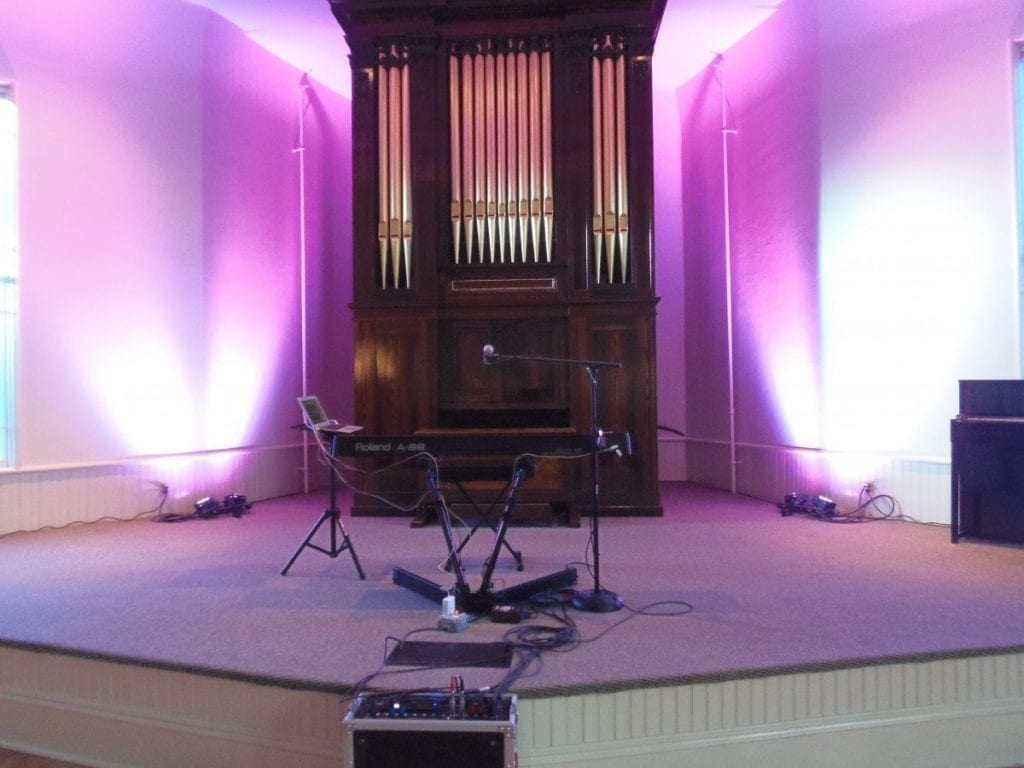 Check out the Live Music News and Review.com Facebook page for updates and announcements. We have put up an exclusive video to a third performance from this show at the Facebook page, so go and check it out!

There are some things you ought to know about your wife.  One of them is her first concert, and thirty years ago roughly, my wife saw her first concert out in Reno, Nevada.  So when I noticed that Cider Mag was talking about Howard Jones playing a tiny town in Vermont about 90 minutes away from us, I had to let her know.

She acted interested but a little coy, but when her friends started nudging me, telling me she really wanted to go, I knew that I had to get us tickets.  She’s so supportive and we see music mostly on my suggestion so I thought it’d be a cool night.  I got tickets very easily.  Shortly after I purchased them I got a nice note from the  promoter, that’s Vermont for ya.

So we ventured up to the Wilder Center in extremely rural Hartford Vermont to check it out.  The venue is a beautifully remodeled church perfectly retrofitted to be an intimate performance space.  Old school music fans filled the room and on a Sunday evening at the tail end of winter (let’s hope) an icon of 80s music was coming to play, literally hundreds of miles from any major city, ready to showcase his music to his fans.

The show opened in unfamiliar territory for me.  I had been a casual fan back in the early days of MTv, but not so much that I owned any of his albums.  Straight Ahead opened the show, and you could hear the Rodgers and Hammerstein roots of the material as Jones let us in on his thoughts about the origins and performances of his songs.  Next up: Back In Your Life Again.

The first song that I recognized that night was What Is Love? and it was beautifully performed.  Jones kept it simple both in vocal and keyboards.  The stage was adorned simply with a Delta A-88 electric keyboard to which Jones indicated that he had synched his laptop and that he was utilizing a program he called Ivory which had it emulating a true Steinway sound.  It wasn’t perfect, but certainly appropriate for the room and the style of the show.

A few more new tunes followed including Building Our Own Future before landing again in familiar territory with Everlasting Love.  There was a quick tease of Twist and Shout in there for good measure.  The familiar material had a new twist in this stripped down format, and with the glimpses that Jones was giving you into his motivations when it came to the lyrics, or his updated philosophies or reflections on these older songs, you felt a new connection to the material. 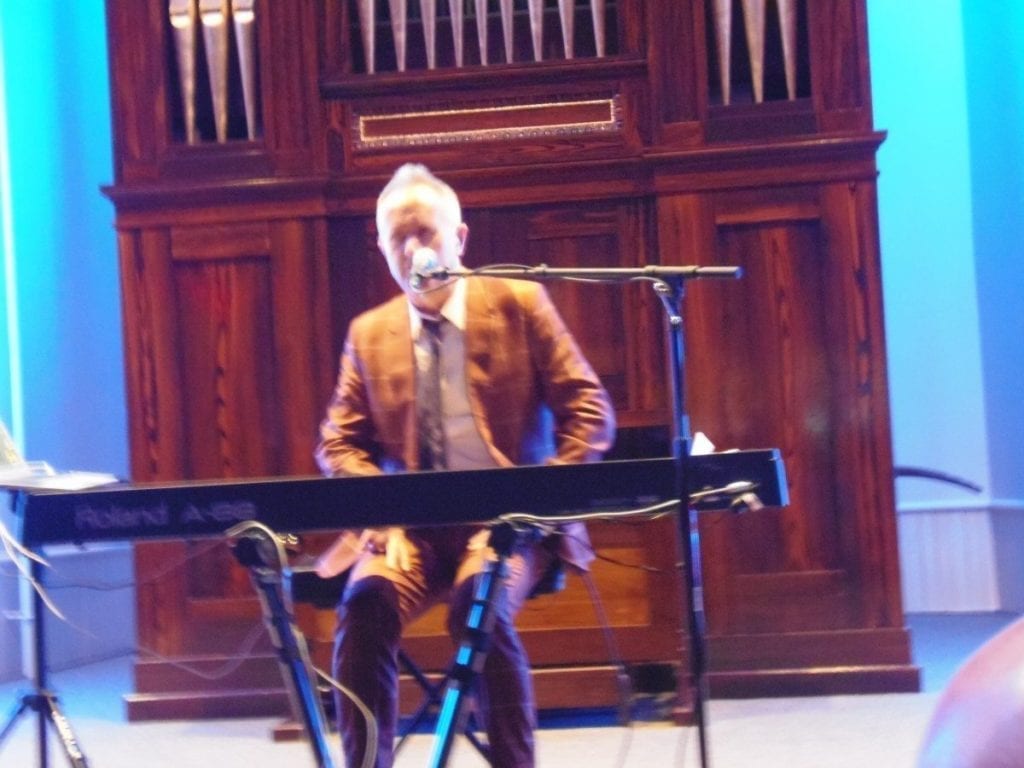 Jones told a great tale of being invited to a Chatau by Miles Copeland, a song writing retreat for which he was grouped with other songwriters to quickly write a song, and he was in a trio that also included Belinda Carlisle (of the Gogos.)  He played their resultant waltz for us, I Look at the Rain.  The song had a much jazzier take, due in part to it’s 3/4 time signature, but mostly to the mood that Jones put into his performance.

Jones then related some great memories of the lead up to and his performance at Live Aid.  He recalled stories of meeting his idols from McCartney to Bowie, and how he had met the Princess Diana and Charles.  He clearly was in awe then of his arrival into the center of the pop music and culture universe, and it effected him deeply.  Singing at Wembley for the biggest concert ever sticks with him, and his performance of Hide and seek is a clearly gripping memory for him.

Tales of the writing of Life in One Day are tempered by his growth away from it’s lyrical message.  Playful in the 80s, Jones wants to give everyone permission to grow from that time frame, who they were then and into who they are now.  He is still celebrating his history and his young self, but he is allowing himself to grow and not become a museum piece for that era.  He celebrates the success of that song while also allowing himself room for evolution both musically in his performance which is smooth and nuanced, and his growth as a person and in his ideas.

Things Can Only Get Better came after a cautionary tale of what it is like to work with a record label.  Ultimately, his ability to stick to his guns and stand behind this song was greatly rewarded with its enormous popularity.  Jones had everyone warmed up, and the audience was his.

Frankly, my first introduction to Howard Jones was as a relatively early adopter.  I must admit that I was hooked on early MTv, and Jones was certainly a frequent visitor to that channel’s play list.  Before any of these hits appealed to me, I was hooked by his joyous and playful song, New Song.  The positive sound of it, the call to free expression and adventure, and the beautiful arpeggios just connected with me.  I always appreciated his later material but I was always apt to bring up this song whenever someone mentioned Howard Jones.  Tonight’s version was both nostalgic for me and exploratory for Jones.  The beauty of those arpeggios still rings true, and Jones emotive voice continues to bring out the message of not only this song but all of his material.

No One is to Blame finished out the night and the crowd showed their appreciation.  Jones has amazing touch and feel on the keys, and his voice is still strong and true.  He is wise enough to play to what you want to hear from him, but he is still challenging his listeners to listen forward, not harken back too much.  The show was great, and I was really pleased to be able to tap into the material to the depth that this intimate performance allows.  Well done, Mr. Jones.

Check out the Live Music News and Review.com Facebook page for updates and announcements. We have put up an exclusive video to a third performance from this show at the Facebook page, so go and check it out!