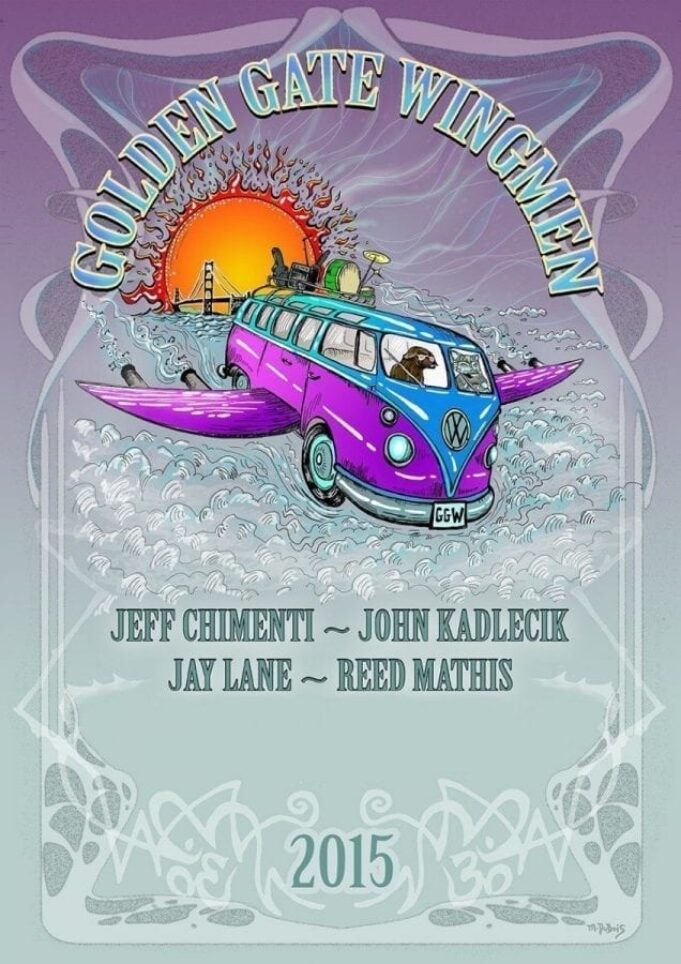 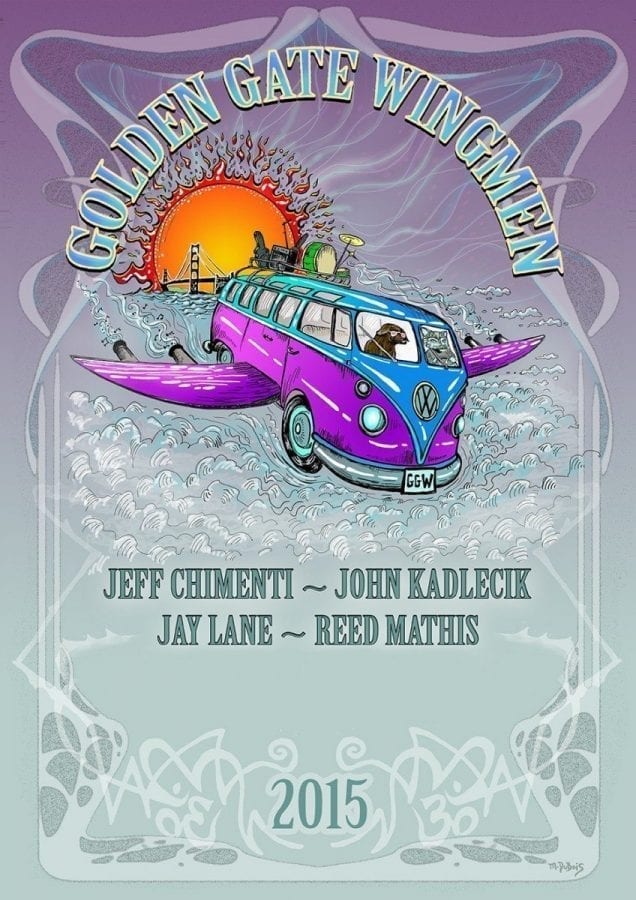 NEW SHOW ANNOUNCEMENTS:  Two new shows in Pennsylvania include July 28th at Coal City Tavern in Luzerne PA plus the Ardmore Music Hall on July 29th in Philadelphia.  Details below.

Check out the review of Way Up South at Riverwalk in Nashua NH by Stephanie Janicedottir here.

Golden Gate Wingmen is the band that Kadlecik formed recently with Furthur band mates Jay Lane on drums (Primus, Ratdog) and Jeff Chimenti (The Dead, Ratdog, Furthur) plus Reed Mathis on bass (Billy and the Kids, Tea Leaf Green, Jacob Fred’s Jazz Odyssey). They have now performed 21 shows including appearances on both coasts, with show just passed in June in New York City (sold out) at the Cutting Room, their first festival appearance in the East at Jam Along the Creek in MIllmont, PA, and the New England premier was on Sunday June 14th at Toad’s in New Haven, CT.  All the shows were ridiculously great.

July 17 and 18 Gratefulfest have moved their dates from their traditional fourth of July position in deference to the Grateful Dead shows in Chicago IL.  Golden Gate Wingmen are headlining both nights.  TICKETS HERE   This year’s Gratefulfest will be slimmed down, just one stage each, so that fans can focus on their favorite performers.  FRI night’s show will include a performance by Cornmeal, Melvin Seals, and the headliners, Golden Gate Wingmen.  Saturday will have a few bands and by mid afternoon Adam Ezra Group will make their premier at Ohio’s favorite jam venue, followed by Melvin Seals, and again Golden Gate Wingmen headlining.  The venue is great, with tons of camping, and a fantastic quarry lake for swimming.

July will see the first ever appearances of the Golden Gate Wingmen in the Carolinas.

July 21 Golden Gate Wingmen will appear at the Grey Eagle in Asheville NC.  Tickets are now up for sale here. 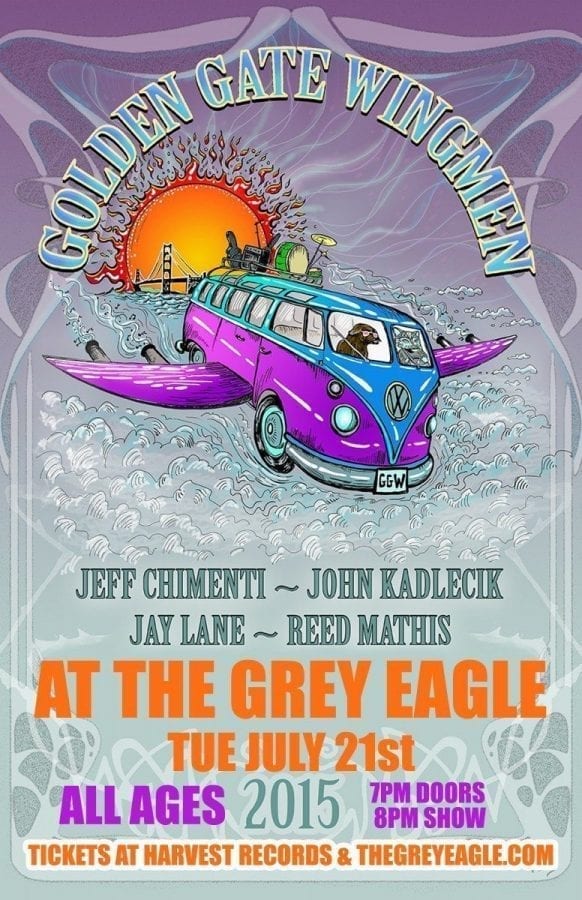 July 22 Time2Fly Music will be presenting the band at the new venue in Charlotte, the Rabbit Hole.  Tickets should be on sale by 4/20 for that show.   FB EVENT here

July 23rd the band will be off while bass master Reed Mathis is at Floydfest with Keller Williams and Jeff Austin.

July 24th Friday Golden Gate Wingmen will be appearing in Raleigh at the Lincoln Theatre, which is an all ages theatre.  Tickets are available here.

July 25th Jay Lane will be jumping off, and heading toward New Hampshire to join many of us up at Jerry Jam in Bath, NH where he will sit on the drum throne during an all star jam session that will include members of Max Creek, Cats Under the Stars and others who will be at Jerry Jam.  That is a great festival, period.

July 29th will see the Philadelphia premier of the Golden Gate Wingmen at the Ardmore Music Hall.  Facebook event here.

Tickets may be purchased here.

August 1 John Kadlecik and the DC Mystery Cats will be doing their annual August 1 show in the Washington DC area at the Howard Theatre.   TICKETS

And there has been a lot of chatter about Lock’n festival lately, rightfully so as it is one of the premier events in the country at this point. September 11 and 12 John Kadlecik will be performing for two early shows guesting as lead guitarist for Melvin Seals and JGB.  Check out Lock’n on Facebook.

Check out the story on the tour dates announcement for Start Making Sense, who are in the Midwest for the first time in mid March, and touring all over the US this Spring and Summer.

One of the most compelling things about Golden Gate Wingmen is their ability to break into territory that no other bands in this genre are, original tunes.  With a whole host of Grateful tributes out there, the Wingmen are really setting themselves apart by putting out new material.  Sure, there are covers, including expected songs from the Dead’s song book, but also unusual covers from the Police, Bob Dylan and Van Morrison.  The pair of shows that capped the Winter California tour included three Van Morrison tunes.  Who else is doing that?

All the members of the band are super busy.  Reed Mathis has dates throughout Spring and Summer with Bill Kretuzman’s band Billy and the Kids. Jeff Chimenti may be the busiest man in show business with dates with Phil Lesh and Friends, Steve Kimock’s latest project, and of course three nights with some band, you know, the Dead this July.  Jay Lane is performing with Phil Lesh and Friends and also is launching his own project along with Furthur band mate Sunshine Decker called Jay’s Sunshine Happy Burger Joint.

More Wingmen dates will be booked throughout 2015, so stay here for announcements.  Fan excitement is gathering momentum.  The Facebook group centered around the Wingmen was launched only recently and is approaching 2000 group members.  Once people get a listen to the band or see a show, they are going to be instantly hooked.  Most fans are remarking that they have not heard a band like this in a long long time.  With so much excitement and mixed emotion surrounding the Fare Thee Well tour, and the myriad of other events and rumors that are popping up, it’s been refreshing to feel the universally positive vibe that is attached to this band. The thing that struck me most about the three times I’ve gotten to see the band is the humongous smiles on the faces of the band members.  At one point in Long Beach I looked over at Jeff Chimenti and the smile that split his face was so wide, it turned him into a Muppet level happy character.  Every photo of Reed Mathis with this band shows him beaming his face off.

So go out there and earn your wings.

Check out the review of Way Up South at Riverwalk in Nashua NH by Stephanie Janicedottir here. 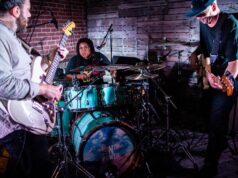 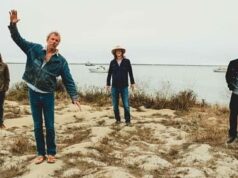