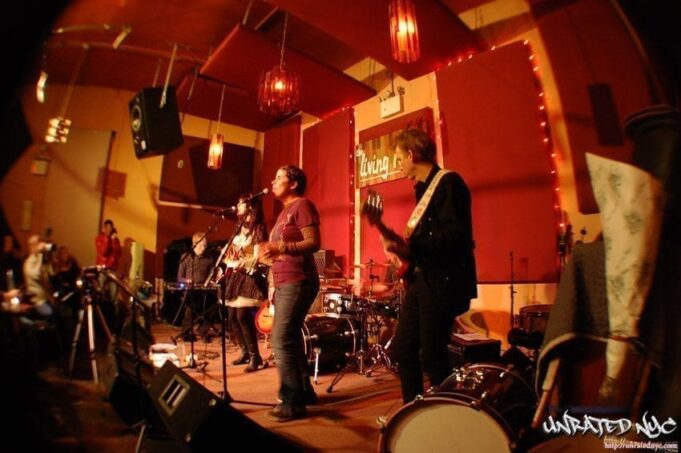 The Living Room Reopens and Expands

The music business drumbeat has been loud and insistent – and not in a lift-your-hands-in-the-air, EDM way. Declining sales. Musicians and songwriters left out of the new streaming economy. Venues closing in neighborhoods where rents have outrun audience. In Williamsburg, Brooklyn, several long- time music venues have closed in recent weeks.  But Jennifer Gilson and Steve Rosenthal, owners of The Living Room, NYCʼs premiere listening room, simply said, “No. There remains a supportive audience hungry for an up-close experience with good music.”  The couple built a 16-year story of presenting the soul and craft of song in an intimate setting on the Lower East Side, and now theyʼve  staked their future on a bigger room and an expanded vision. The Living Room, their new 250- capacity venue with the Rust Bar in front and a  roof-deck bar with a Manhattan view, is now open at 134 Metropolitan  Avenue in Brooklynʼs Williamsburg neighborhood.

“Weʼre a family-owned business that was built purely on our love for music – and our belief that there will always be an audience for great songs and great sound,” says Rosenthal. “We didnʼt see the type of intimate listening experience that we created with The Living Room.  So now weʼre back.” Rosenthal knows sound: Heʼs also the Grammy-winning proprietor of The Magic Shop, the legendary recording studio featured in the New York City chapter of Dave Grohlʼs Sonic Highways series on HBO,  which presented both a history of eight local music scenes and a  cautionary tale of the changing music landscape. “This is personal for us,” Rosenthal maintains. “Weʼve put our familyʼs future on the line.  But we just refuse to quit.” 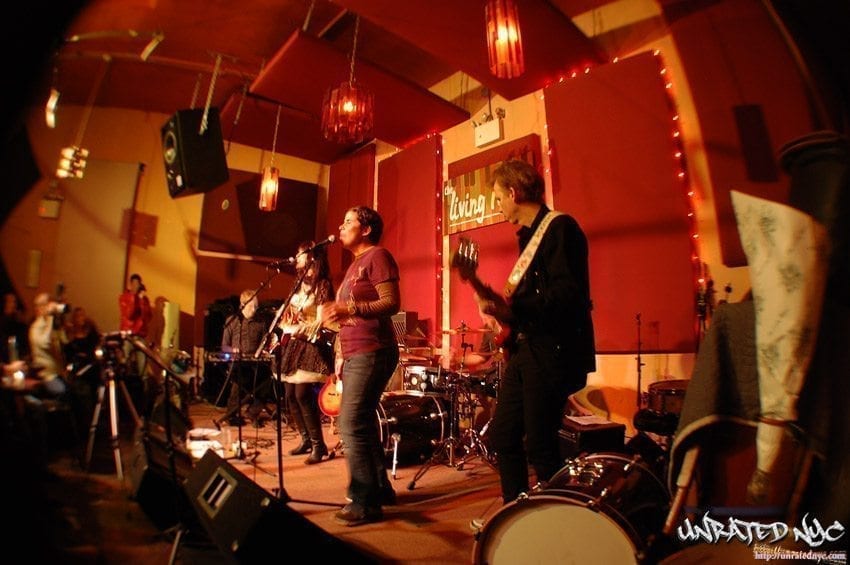 His wife and partner, Jennifer Gilson, once again leads the creative and music programming at The Living Room. The new room gives her increased flexibility along with the added capacity. “Our main music room has a standing capacity of 250, including a wrap-around balcony,” Gilson says.  “Perfect for rock, roots and indie-bands. We will have DJ sets as well.  But we can quickly add tables, chairs and candles for intimate, close-up evenings with singer/songwriters and folk artists – itʼs like the Ludlow  Street location that artists and audiences loved dropped into a larger rock club.” The Living Room launched the careers of a generation of singer/songwriters, and now Gilson intends to do the same for the next generation of musicians, many of whom now claim Brooklyn as their home.

For example, on January 21, Alex Bleeker of Real Estate will curate a much-anticipated night that includes the return of Alex Bleeker and the Freaks, with King Cyst and comedian Adam Friedland. Other upcoming performances include Jolie Holland on February 5; Son Voltʼs Jay Farrar in a rare acoustic setting on February 10, and British R&B showman James Hunter on April 22. Jim Campilongoʼs ongoing residency warms up Tuesday nights (recent guests included Wilcoʼs Nels Cline, and Jimʼs residency was covered in the New Yorker).

Upcoming shows at The Living Room

10pm Vita and the Woolf

10pm The Sea The Sea

Charming Disaster CD Release with Not Waving But Drowning