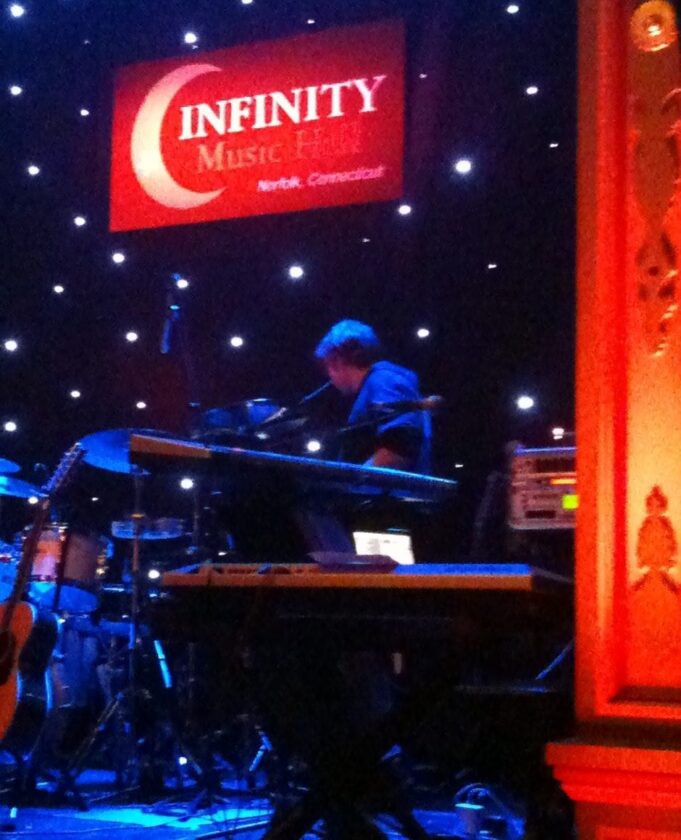 Here’s what I knew about Renaissance: They are a progressive rock band, but one that is different within a whole genre of ‘different.’ They have a fantastic female singer, and they were early in the developing music scene to have a woman-fronted band for prog music. They have always been respected; I’ve never heard anyone respond as they might with other prog “monsters.” They had an album called “Scheherazade” which may or may not have had anything to do with Arabian Nights, and a more mainstream record called “A Song for All Seasons” in the late 70’s when I was a college disc-jockey. Annie Haslam did a solo album a few years later, with an appearance by Justin Hayward of the Moody Blues on vocals and acoustic guitar for one song.

I conducted a little research before I went to see them perform at Infinity Hall in Hartford. That research told me what I’d expected: Renaissance has a long history, with many personnel splits and transitions. There was some derision from critics along the way, and a huge back-catalog, ande a real exploration of that catalog seems daunting. What I didn’t know (or had forgotten) was that the band actually started at the disbanding and subsequent

pairing of two of the original Yardbirds, even sharing Cat Stevens’ producer, who was another former Yardbird. They became one of those few bands to retain no original members (a study in itself), but this happened quite early in their history, not even two years along and with only two album under their belts.

What I find interesting about Renaissance is that they have no apparent connection to the Canterbury Scene which spawned the whole progressive rock movement. Their acoustic and organic sound epitomizes the entire essence of that scene. Before electronics came along, folk bands were whimsical lyrically and jazzy in their composition, so that fantasy and symphony became attractive to rock artists. As the music and technology became more complex, the genre developed, but it was originally nothing more than folk music, albeit from folks who hungered for experimental forms.

So, this band called Renaissance is the one that has stayed most true to roots it never shared. And that is what really sets prog from other rock forms: paradox!

*******
Lovely… just lovely! This Infinity Music Hall in Hartford is a lovely place, nicely appointed and acoustically secure. One expects immaculate sound because of the hardwood floors and woodwork throughout the venue. The look of the stage is beautiful, just what would be appropriate for a classy band like Renaissance. The lighting is subtle and consistent, mostly blue in hue, appropriate for the venue and the band. Lenses and colors

are applied variously as the evening progresses, but gently and tastefully.

The music so far is what might be called “glorious,” or perhaps “grand” and “majestic.” The are apt descriptions of the lead singer, who possesses a five octave range. Sweet and angelic, atmospheric but not airy; Annie Haslam’s singing hints not one whit at fragility. This material, with the accompaniment of the expert lighting, steers clear of bombast, that overbearing monster that pursues most ‘progressive’ bands.

There are no electric guitars anywhere in sight, unless the five-string bass counts. There are moments when the bassist, David Keyes, almost appears to be strumming chords, but a closer look reveals that it’s just the man’s style. He plays with a pick, and strums as he strikes rather than plucks the strings. Ryche Chlanda, the new guitarist, plays acoustic, six- and twelve- strings alternately. The bassist and the drummer, Frank Pagano, supply most of the backing vocals, though the guitarist and both keyboard players have microphones at the ready.
Two keyboards, played by Rave Tesar and Jason Hart, are perfectly appropriate and quite lovely. They didn’t overplay and were always in balance, supplying a range of sounds and any mood or genre that they may wish. Classical-sounding piano duets with bass before the band comes in with dramatic string synth; timing changes are smooth and/or jazzy; flutes and all manner of

instruments are employed all to good effect. And the voice blends, underscores, or soars, all complementing and in service to the majestic music. To this listener, one not overly familiar with the band or their catalog, Ms. Haslam’s voice sounds no different (really!) than it did two or three, or even four, decades ago.

Many of these songs come from a new (2012) album, and then re-released with additional tracks for world-wide distribution. The original album contains the last recordings of long-time core member Michael Dunford, who passed shortly after its release. The new material includes a song written for Dunford; “Symphony of Light,” is a grand composition encompassing numerous moods and movements. It is a fitting tribute to a collaborator and partner.

“Mother Russia,” introduced as ‘a song from a long time back,’ is clearly known to many in attendance, as arms go up in wispy maneuvers, like so many seated ballet pantomimes. This lengthy song, in particular, showcases the ageless grace and beauty of Annie Haslam’s voice- especially when she holds that long, sustained note for some thirty seconds without faltering.

The encore, “Ashes Burning,” is preceded by introductions for the band and other personnel. It seems the tour’s sound man is none other than producer and engineer Denny Bridges- he may well be the most-storied ‘celebrity’ in the bunch! The song proves to be a fitting showcase for all the talent assembled here, with cascading cavalcades of keyboard leading into a lengthy bass solo followed by a dynamic and uncharacteristically bold synth solo. For some few minutes, these aging Brits could pass for an all-American jam band. Finally they bring out the old-school organ sounds leading into a short piano section, reminding all present of their original genre, as they bring the show to a close with pounding crescendo and vocal denouement.