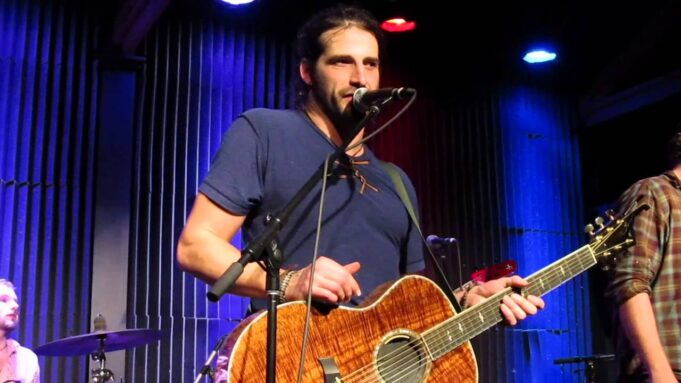 The evening was wickedly cold and rainy when we arrived for the Adam Ezra Solo Show at the Davis Square Theater in Somerville, MA.  Parking was tough to come by and the walk to the venue was wet and windy, but my friends and I arrived and made our way into the basement theater.  We found ourselves in an intimate room, which had sold out for the night.  Adam took the stage and let us know that he would play some songs we had not heard before during the first set, and then after intermission he would play the full album “Rag Top Angel” acoustically.   While he was playing solo, it was great to see that three members of the AEG were present to help and support him on this evening, Corinna, Francis, and Josh, along with other close friends and family.

He started the set with “The Mountain”, which then led into an untitled song inspired by the story of Siddhartha meditating by a river.  It spoke of love and loss, and the need to rest and reflect.  It has no title yet, but listening to the lyrics reminded me of a mother’s hug; nature wrapping her arms around me and telling me that things would be okay.  He then moved on to three songs that were inspired by his love, Allison: “Letter to Allison,” “You Speak Girl,” and a sequel to “Basement Song,” called “Chelsea Song.”  These all show that he is just like any other man in love: confused, elated, maturing, clueless, and devoted.

From the start and as the evening progressed, Adam interjected stories about the songs and his life.  It was clear that he spoke to the audience not just to fill up the silence while he tuned his guitar, but it made us feel like we were the only ones in the room sitting and having coffee with our best friend – intimate and close.  When he introduced the 7th song, “You Today,” he talked about the inspiration and power of music.  He wrote the song after visiting Terry, a fan in New Jersey, while she was in hospice care at home.  It made me think of my own mother and how music can help one to live in the moment, reminisce about cheerful times, while holding fast to memories.  It made me cry with tears of joy and sorrow.

Check out the review of Afterfab: the Beatles Solo Years, also at the Davis Square theater.

As the evening progressed, Adam played “Cover Man,” inspired by his first gigs in bars where he was stifled creatively and “sold out” playing cover tunes to pay the bills.  Then he moved on to a beautiful song, called “Hearts and Triangles,” about children and how simple life can be.

For most of the evening, Adam sat alone on stage on a stool, but now he asked two special guests to take the space in front of the stage with him for the next two songs.  “Raven” was accompanied by Adam’s friend Jackie Damski, an accomplished fiddle player he’s performed with in the past.  They swayed, playing off each other’s energy, truly doing what the song implied by “dancing with the raven.”  Then Jackie sat and Adam introduced a very special guest: his Mama, Joann Hamell.  Now we know where Adam gets so much of his talent as Joann is the director for a local inter-generational choir.  They sang and danced to the song “I’ll See You in the Morning,”  a traditional song famously covered by Joan Baez and Tom Wood.  Adam spoke of fond memories of the song as a child; and it was wonderful to see this mother and son perform together on stage.

I have seen the Adam Ezra Group on a few occasions in the last couple of years, but this was a wonderful delight, to see him perform such poetic and melodic songs as a solo act.  Any fan of the group would be highly recommended to take an opportunity to see Adam perform solo.  It is just as intimate and thoughtful and powerful as when he is accompanied by the band.  But anyone who thinks they’re going up Newmarket, NH on Halloween to see them at the Stone Church, think again- that show is sold out.  Hopefully, this trend will continue for the Adam Ezra Group, fronted by such a generous and genuine human being.  – Peace, Love, and Happiness  Stephanie Janicedottir

Adam Ezra is an authentic folksinger and an authentic person- he must be as authentic as he seems, or he’d be making it big in Hollywood!  Anyone who presents as he does and chooses the long and uncertain path of an ‘artiste’ could not be anything but authentic.  To call him a folksinger, while calling up the image of a minstrel singing heartfelt songs, might leave out other components in his style- Adam Ezra is a multi-genre artist, though he certainly qualifies as what we’re calling Roots Music or Americana nowadays.  His style contains elements of country, both old-school and new Nashville, and World Music creeps its way in as effectively as with other singer-songwriters, but much more subtly.  His influences are less obvious, and so his music sounds more original, than many others.

I made to the Davis Square Theater in time for the second set only.  What I got for my troubles (traffic etc.) was an entire album, Ragtop Angel, done solo and unplugged.  Having seen the full Adam Ezra Group once before, for a long set at Old 78 Farm Festival (review of Old 78 is here), I had an idea of what I was in for; and I was quite curious to see his solo style.  Not surprising was it, then, that his manner and delivery are just the same as with the band- how could it be otherwise; he’s the real deal and a real dude.  As he sang the album’s opening track, “14 Days,” (which, incidentally, closes the Better Than Bootleg live CD), I was struck by the emotive and percussive acoustic six-string accompaniment.  The distinctive, soulful, low-toned and slightly snarly vocal serves the song well and acts as introduction in a way that’s catchy, attention-grabbing.

“Dear Miss Halleluiah” is plaintive, emotional and strong in its lyrical content and its vocal delivery, especially as it culminates with the idea that one “could count on days like these.”   The tempo picks up with the third song, “Devil’s Side.”  Beautiful and energetic, this rollicking ride (on horseback or sixteen-wheeler, no matter) is loaded with internal rhymes and effective chants juxtaposed and played off each other like a series of clever limericks balanced with simpler lines to sing along with.  A lot of these songs have an almost anthemic feel to them, as the listener feels led to join in and sing along without learning the words first- as in the case of “Takin’ Off,” the song containing the album’s title: ‘Ragtop angel, you’re amazing grace…”  This is the stuff that makes one wonder, ‘why don’t I just listen to this all the time?‘

Poetic and pretty, “OK By You” is an ‘end of love’ song, as introduced by the singer.  The idea that a relationship can end, bittersweet and all, and be OK, is a beautiful thing.  Clear, sharp playing, like the singing, prevails though all the songs; one can’t help but identify with the feelings conveyed in the words and in the music, both.  “Colder Days” is another poignant number, even as it rolls along like a compelling Springsteen ballad.

Along the way, as a couple stand and head out, Ezra relates to the ‘look of shame’ and relieves everyone present of that feeling of discomfort that comes when ‘ya just gotta go;’ his self-effacing banter and genuine humor work to make us all comfortable.  “Serenade,” a primarily piano piece on the album, works well in this mode- the lyric of ‘serenade’ and ‘fool’s parade’ stand out via the vocal.  “Soldier” is a low, moody, dramatic, and most meaningful song.  Anthemic again, this is certainly a sentimental-feeling song.

The last song, cleverly called “In the End,” gets an introduction by way of a story about the artist’s grandmother who painted: “If I could make something so beautiful… now, every time I write a song…”  He expresses gratitude for the night, for the audience, and for the opportunity to play these soul-baring songs.  Explaining his desire (or policy) to play music and connect with people, and somehow become something bigger, he tells of times when he would “play to rooms with no one listening… then set my sights a little lower… if I could get just one person to tap their foot…”

As Adam Ezra plays himself out, leading into the last song with his own accompaniment, he tells the audience, “whatever you get out of it, you should know… I get a lot more…” while playing beautiful music to dramatic effect.  It seems likely that every single individual in attendance is thinking, as I am, ‘if I did that, that’s how I’d do it.’

Check out the story and interview with Rebecca Loebe.

Check out the review of Afterfab: the Beatles Solo Years, also at the Davis Square theater.