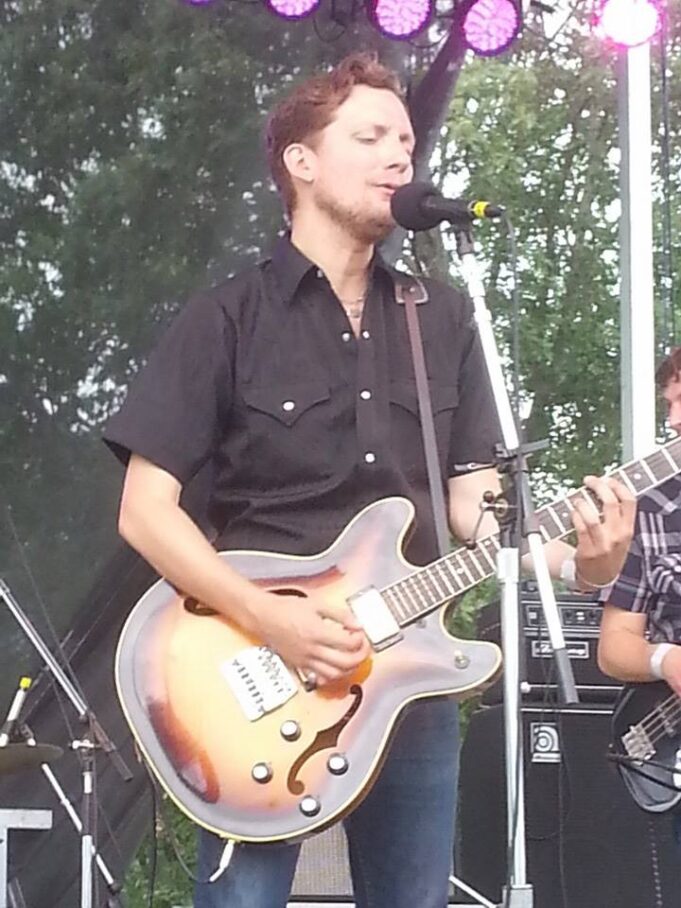 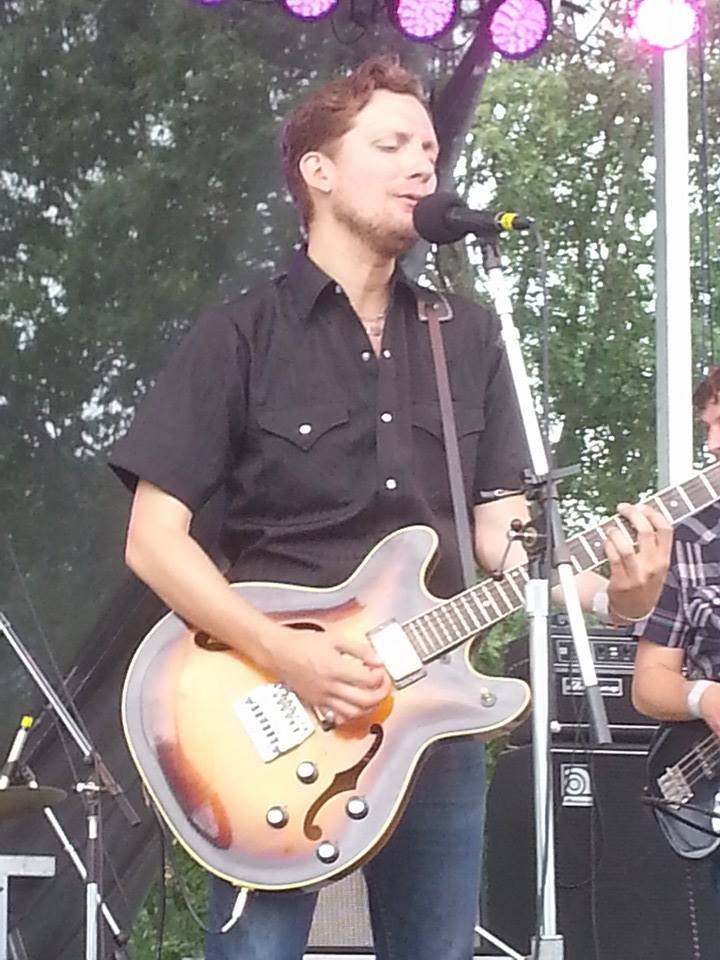 It had been a half a year since I saw five time Boston Music Award winners Girls Guns and Glory at their CD release show at the Sinclair in Cambridge, MA.  In the intervening months the band has been all over the map with shows from Boston to Maine, New York, Idaho, IL, IN, OH, MI, RI and now here at one of our favorite festivals, the Green River festival in Greenfield MA.

As we came in and parked easily, and then made our way through what appear to be ever expanding festival grounds for this summer staple event, the wind was picking up and we looked at ominous clouds in the sky.  We settled into one of the auxiliary stages, and saw the crowd gathering as the four piece band took to the stage.  Instead of the tent that had been in this spot in the past, this was a full festival stage, with quality staging and sound.

Both the band and their audience appealed to the sky to hold off the rain, if only for a little while longer. The show opened with a pair of Girls Guns and Glory classics, Snake Skin Belt and Root Cellar. Over the course of their set, nearly an hour, the band rifled through selections from their multiple releases including a good sample of material from their latest, Good Luck.  All the Way Up to Heaven, All the Way Down to Hell showcased band leader Ward Hayden’s pristine and authentic vocals so beautifully, especially for an early afternoon set.  Gun slinging lead guitarist Chris Hersh joined bassist Paul Dilley on vocals for the Commander Cody song I Took Three Bennies and My Semi Won’t Start.  It was unusual, and indeed welcome, to see Hersch really taking command of a tune on vocals.

I had never seen that one before, nor the next tune You You You which Hayden described as a bit of a break up song from his past.  Mary Anne came next, but it was  One of These Days that really got me, as that song really illustrates what is most evocative about Hayden’s vocals and highlights what is great about this band.  Their ability to connect with you emotionally with quality lyrics and emotive singing perfectly bringing out all that is great about American music.  Notice I say American, instead of Americana, their sound is so all encompassing, you can feel all parts of this great land within their songbook.

Shake Like Jelly was followed by Be Your Man.  Chris Hersch got back on the lead vocal mic for Roscoe Ambel’s The Girl I Aint Got.  Ambel produced the band’s current album, and you can strongly hear his influence in the band’s enormous progress this last year. But there is no discounting their talent.  Chuck Berry’s Sweet Lil 16 was a song I did not expect, nor did the rest of the audience, many of whom mistook it logically for the more well known Surfin USA by the Beach Boys, stolen almost note for note from the Berry classic.  I didn’t know that GGG was performing that one, yet another surprise from the last six months worth of shows I had missed!

Just as I was thinking that I wanted to hear it, the band went into the Inverted Valentine album’s best song,  667.  Having delivered to the audience every shred of evidence that proves that Girls Guns and Glory are the best Americana band not only in Boston and New England, but quite possibly all of America, we were putty in their hands as they completed the show with the Hank Williams classic, I Saw the Light.  Due yourself a favor, go see Girls Guns and Glory right away.  They are everything that is great about the great tradition of American music.  Great songwriting that is crafted into beautiful vocals and band performance with dynamic players.  I saw the light, indeed.

The rain held out for us as we took in another great couple of hours of the Green River Festival  We caught a few songs of Andean hip hop band Ana Tijoux.  We sauntered over to the main concert field for the family reunion of Dave Alvin and his brother Pete who steeped us in more great American music.  Bart’s ice cream was enjoyed by the whole family, and time was spent on the climbing wall.  We were leaving as Lady Lamb the Beekeeper was taking the stage, as my wife looked up with that intuition that women sometimes have, and said “We should leave right now!”

The rain started 5 seconds before we got into the car and the skies opened up.  Another successful visit to the Green River festival!