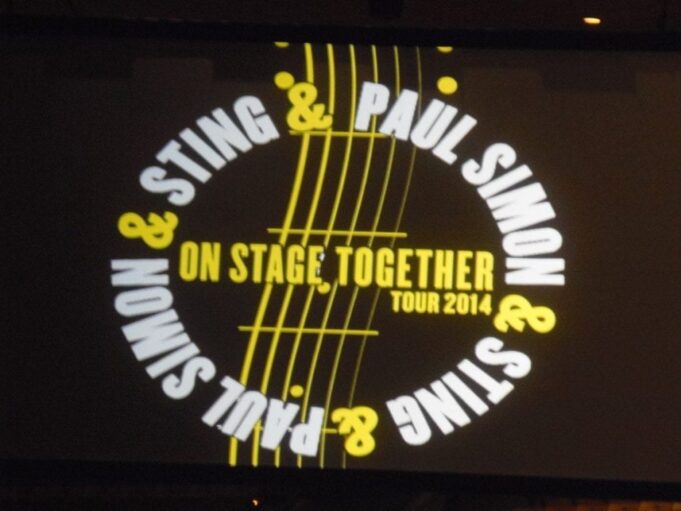 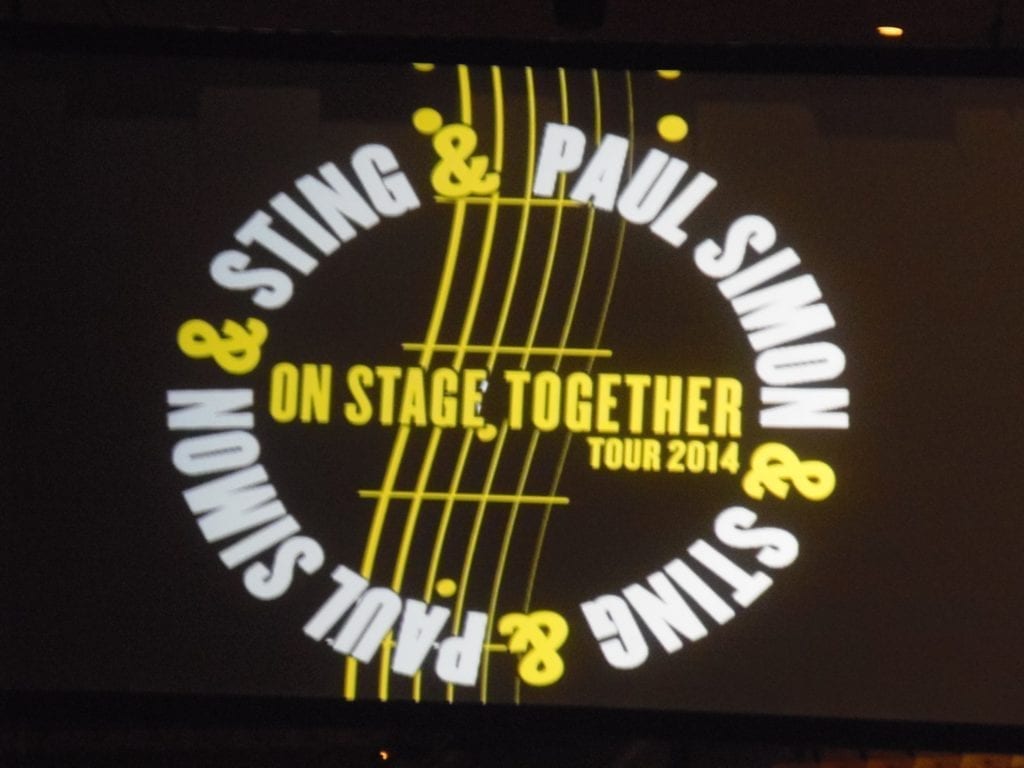 I had seen each of these two amazing artists before:  Sting three times opening for the Dead in Vegas in 1994, once with the Police and Elvis Costello a few summers ago at SPAC, so this would be my fifth time seeing him perform.  I was lucky enough to catch Paul Simon twice on the Born at the Right Time tour in support of Rhythm of the Saints, once with Bob Dylan in Portland, OR back around 1998, and this show.  I knew that we were in for a huge treat when the lights went down on the Boston Garden (I just can’t call it TD BankNorth, sorry).

When you get two great artists together like this, the first question is, how are they going to handle it?  Certainly few recording artists have ever sold the number of records and concert tickets that Paul Simon has over the last 50 years.  But then again, Sting is known to have a pretty health ego, would he share the spotlight?  Who goes on first?  Will they play together?  Will they share nicely?

That question was answered immediately as the stage was occupied by some 15 musicians spread across the whole width, as the show opened with Sting’s Brand New Day which featured both bands killing it at the same time, and Simon and Sting sharing the lead vocal duties.  Holy smokes, I did not expect that.  And they continued in this fashion with Simon’s Boy in the Bubble and Sting’s Fields of Gold.  This gave way to some friendly banter and a discussion of how the show was going to unfold, and Paul Simon and most of his band left and gave the stage over for a while to Sting.

Sting took his band, which composed mainly of him on bass, a horn section that included sax and trumpet, a guy who played accordion and harmonica, a female backing vocalist, and several guys who played various stringed instruments from guitar to fiddle.  They banged out a great version of Every Little Thing She Does is Magic sans Simon and his band, and then played An Englishman in New York.  Sting then took the microphone and talked about how like many other English classic rockers (Elton John, Mark Knopfler) he had a lifelong desire to write a country song.  To that end he wrote a song and sent it to Johnny Cash who recorded it, titled I Hung My Head.  While he may not have achieved the country sound, the song was great.  The band rocked hard to the classic Driven to Tears which was very electric guitar driven and then did a very interesting Big Band introduction and treatment of Walking on the Moon. 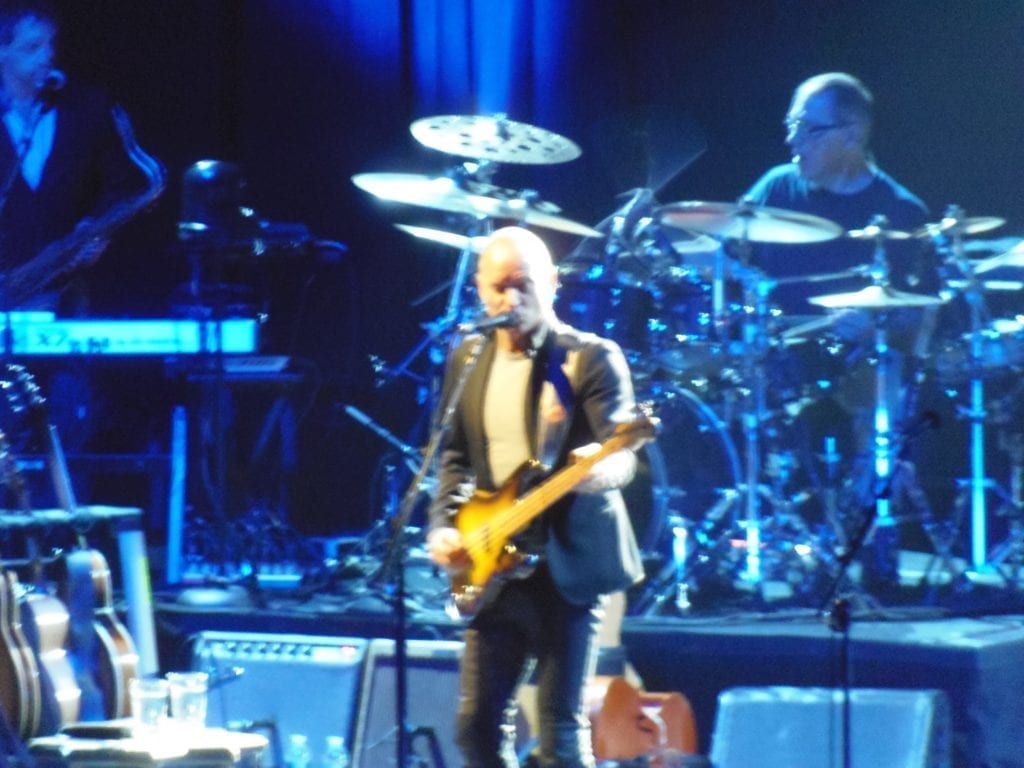 I began to wonder if there would be a set break when Paul Simon returned to the stage with his musicians in tow and collectively they all did Mother and Child Reunion.  So without a set break at all, Simon and his band took over for a while and played Fifty Ways to Leave Your Lover, Dazzling Blue (from the last album Simon released – So Beautiful or So What,) the classic Graceland, and Me and Julio Down by the Schoolyard.

Sting returned to the stage and both bands played Fragile and Simon and Sting shared lead vocals verse to verse, with Simon commenting on how much he liked the song and how he looked forward to playing it every night. Simon and the band left again, and Sting and his band took control of the stage.  With just a minimal amount of support, Sting talked of his first tour of the US with the Police and how he hit Boston’s club scene and got to see the US for the first time.  Then he surprisingly played Simon’s classic America without any members of Simon’s band.  Despite how difficult that song is to perform, Sting had no troubles at all.  Several more Sting songs followed, with various members of Simon’s band floating in and out of Sting’s ensemble, and vice verse.  So if a particular player’s strengths lend quality to a song, regardless of who wrote or performs it, they join in the band.

Message in a Bottle had the crowd enthusiastically singing along.  A song I wasn’t familiar with called The Hounds of Winter followed by the more familiar They Dance Alone.  Next came a rollicking version of Roxanne which featured many of the instrumentalists from Simon’s band to come onstage and join in backing vocals.  It was really evident that the band members were really excited about the breadth and depth of the catalog that they were working, and that rather than being uncomfortable by new material that they may have had to learn, that they were invigorated by it.  East Indian vocalizations shepharded the start of Sting’s hit Desert Rose which was as exotic and melodic as can be. 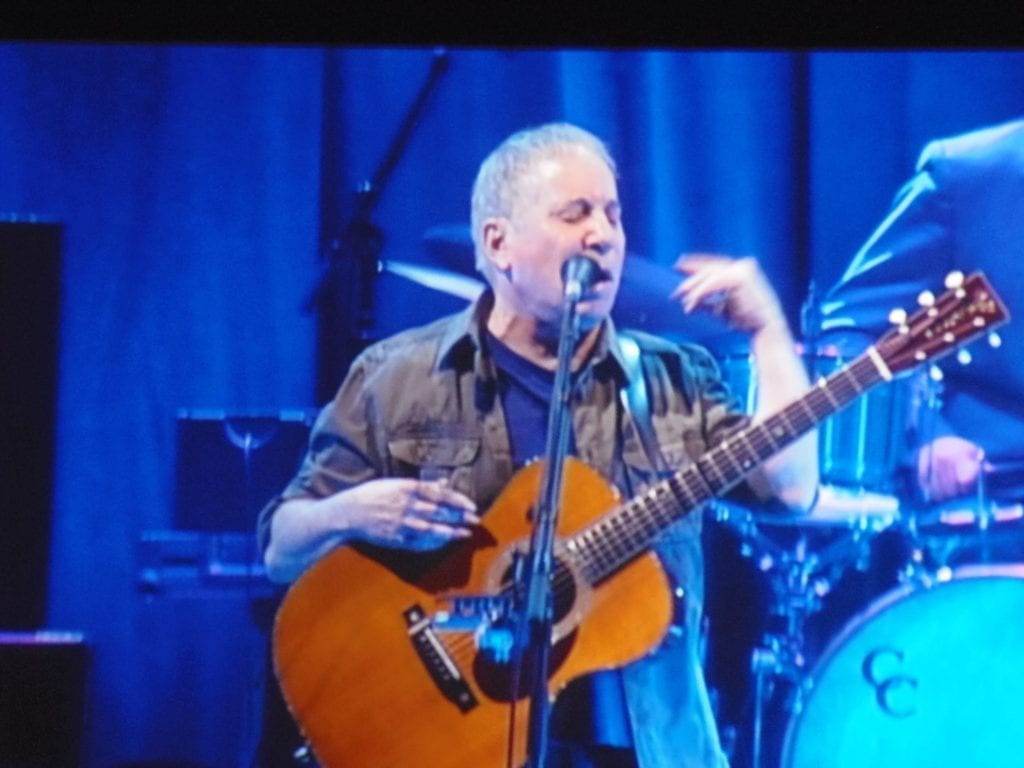 A word about the musicians.  Virtually every musician on stage had multiple duties, whether covering both an instrument and some backing vocals, or whether covering multiple instruments.  It was common to see someone set down their guitar to pick up a position in percussion, or to rush to a vacant microphone or share one with another stage member.  This bred what felt like a sense of comraderie on stage and, as an audience, felt the kinship shared between the band members.

In particular, Mark Stewart, who seems to have been Simon’s right hand man for the last decade or more was a jack of all instruments.  While he most commonly had a guitar, he was noted to play multiple saxophones, cello, and lend his vocals.  He seems like the kind of guy where you could present him with an instrument you created yourself, and within minutes, he’d be better than you at playing it.  He was the cement and glue that held together the vast array of musicial need on stage.

Both bands participated in the unfurling of the Boxer, a staple for any Simon concert, after which Sting and the band departed. Simon’s band then stretched out on a variety of songs in the next section, including rareties.  An extremely authentic cajun take on That Was Your Mother got the crowd whipped into a frenzy.  A contemplative   Hearts and Bones spoke to the true catalog enthusiasts.

And then the unexpected.  Junior Parker’s classic Mystery Train, which had been made popular by Elvis Presley, took it’s turn in the Simon song machine.  The song then transitioned with only a few band members taking over and the drummer picking up an acoustic guitar for a take on Chet Atkins’ Wheels.  It was great to see Simon and the band take some time to indulge themselves and veer away from their catalog to show their appreciation for other people’s music and to educate the crowd in the history of American music. 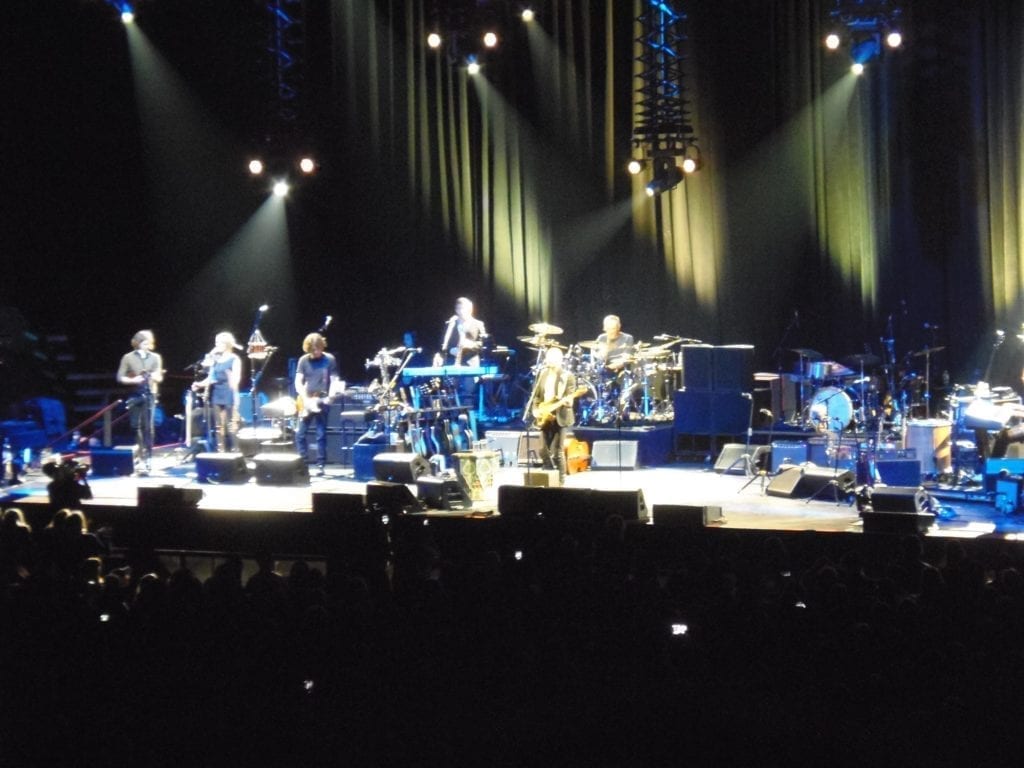 Simon closed the show with a series of his hits including Obvious Child, Diamonds on the Soles of her Shoes, and You Can Call Me Al. That trio of songs allowed him to return to his most recent band iteration that leaned heavily on African and world musicians and returned the audience to a place of familiarity.

The pairing of these two amazing writers and performers was made possible by, among other things, their residence in the same Manhattan building and sharing a bill at a recent benefit show.  From the get go, their thoughts included performing together, not just swapping sets, but doing a lot of performing together, and recreating the songs to fit two voices when often they had not been written that way.  While that was easy with some of the Simon and Garfunkel material, it was more challenging with some of Sting’s material and some of the later Paul Simon material.  The end result of challenging two such gifted writers and musicians was as spectacular as you would expect.  The pairing seemed so odd when I heard it at first, but as the results unfurled themselves, became all the more obvious and comfortable.  This is an unparalleled opportunity for music fans – what if you were able to see a concert with Mozart and Beethoven together?  Or Aaron Copeland and Placido Domingo?  This is the level that the pair were able to achieve together, churning the waters of popular music over the last five decades.

The encore was as compelling. Sting stepped up to sing the Garfunkel parts on Bridge Over Troubled Water.  Any doubt about his true vocal abilities were dashed as he crushed the extremely challenging vocal, while Simon contributed to his own piece with a verse in his relaxed yet completely proficient style.  Sting’s hit was next, Every Breath You Take.  And finally a fun send up of Simon’s Late in the Evening, all with shared vocal duties.

The totality of the bands took a collective bow, but we were not done yet.  Sting and Simon took center stage, and their mutual admiration was palpable.  They took up a pair of simple acoustic guitars, shared a microphone and send us off into the night with Phil Everly’s When Will I Be Loved?  The answer, instantly, and always.  If you have the opportunity to see this tour, you must.  The only draw back was that it was the most expensive concert tickets I have ever purchased.  The flip side is that the musicians clearly spent a lot of time, money and energy to create the best tour that they possibly could have, and the results shone brightly. 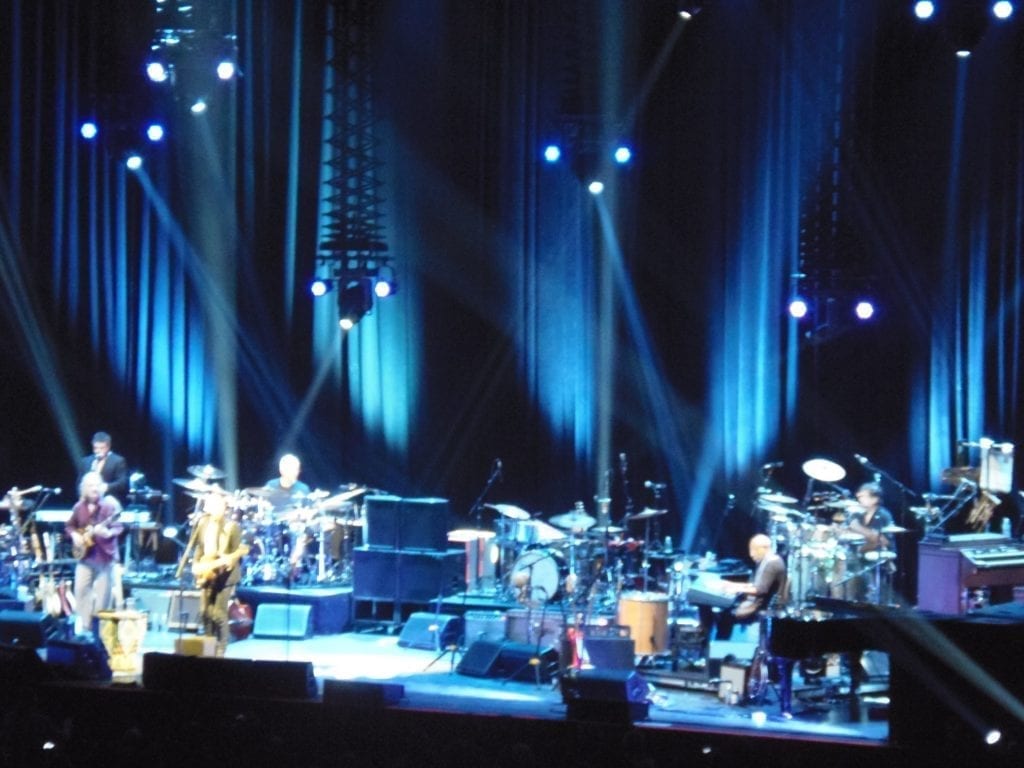 Brand New Day.   (both Sting and Paul Simon on vocals)

Boy in the bubble
Fields of gold

Paul Simon and band leave the stage, Sting and band only.

Every Little Thing She Does is Magic

An Englishman in NY

I Hung My Head.  Driven to Tears.
Walkin on the Moon. 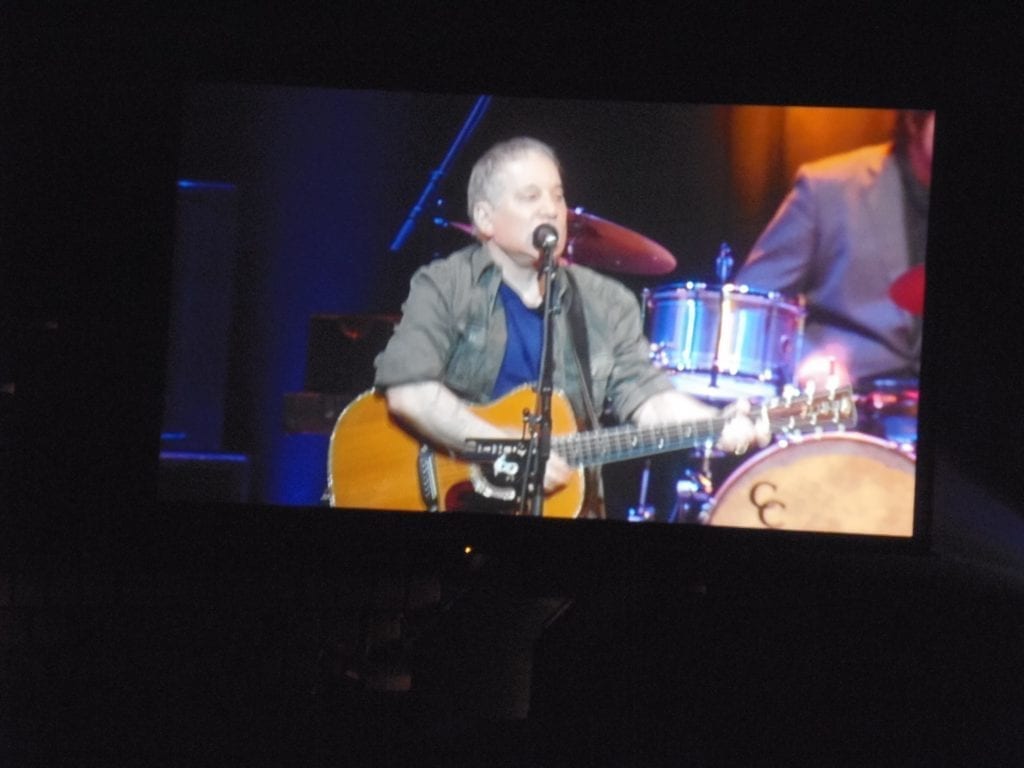 Paul simon and band return Mother and Child Reunion with both bands Sting and band leave.  Fifty Ways to Leave Your Lover

Dazzling blue
Graceland
Still Crazy After All These Years
Me and Julio Down by the Schoolyard
Sting and band return and both bands:  Fragile
Paul and band leave.  America written by Paul but done by Sting
Message in a Bottle
The Hounds of Winter 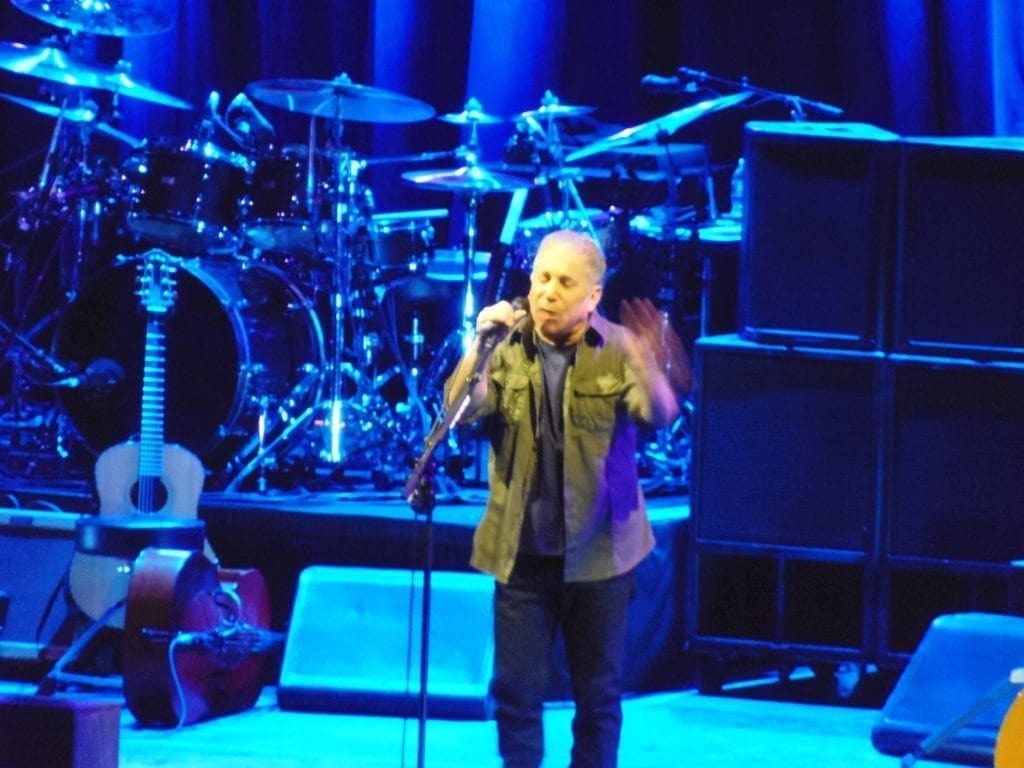 Desert Rose
Paul returns. the Boxer (both bands)
Sting and band leave:  That Was Your Mother
Hearts and Bones
Mystery train Americana version into Wheels by Chet Atkins
Obvious Child
Diamonds on the Soles of her Shoes
You Can Call Me Al 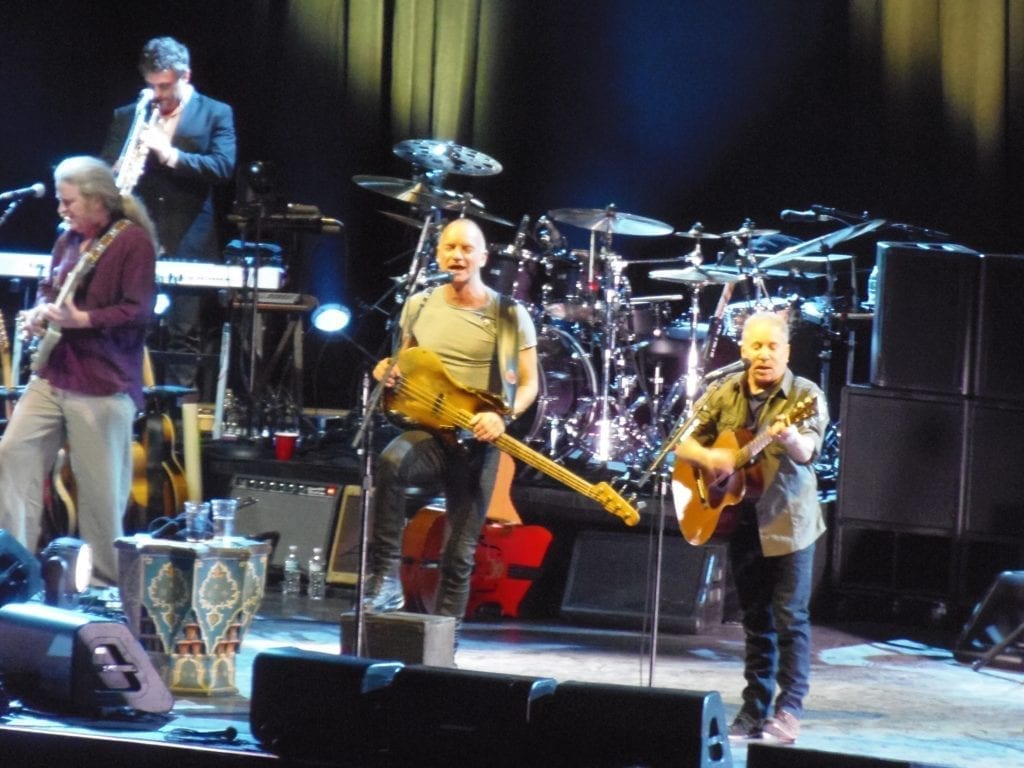 Just Sting and Paul on guitars and vocals perform Phil Everly’s  When Will I Be Loved.