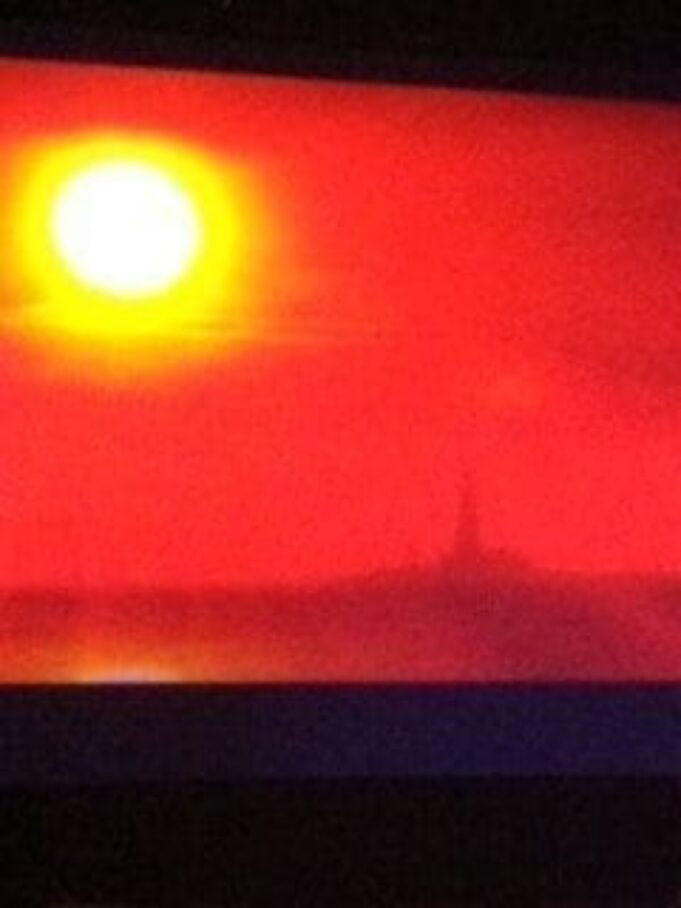 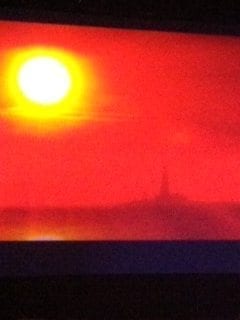 So yesterday afternoon I was pondering my choices for entertainment.. I saw that Phish was playing in Worcester- two tickets in the nose bleeds were available through Stubhub.com  probably with fees the pair would cost $200. Then, I saw that Thomas Dolby was playing in Somerville at the Somerville Theatre doing a unique tour that will only be taking place this year, a miss it never see it again type of thing.  The description of the show seemed to imply that it would be interactive with movie screens, art piece, and music.  I got two tickets, orchestra row F, just a few feet from the stage- both together were $63 with fees. Well played Mr Dolby, well played. See you tonight.

So we drove into Boston, and got a fabulous dinner at Elephant Walk in Somerville- a nice place with a mix of French and Combodian fair.  No alcohol, with tip, $65 roughly.  We got to the theatre, were easily able to get our will call tickets and walked inside.  I saddled up to the concession stand and bought a dark beer, 16 oz draft, for $5.  So all told- gasoline, nice dinner, a beer, and two tickets to the show:  roughly $150-  less than what just the tickets to Phish would have been, and since I’ve seen Phish more than 70 times, and parking and dinner would have cost another $100 in Worcester, I felt like we ought to do the more original thing, suspend convention, and see what this maturing English pre-cursor to electronic music had in store. 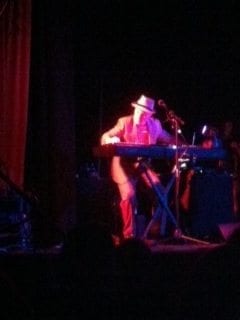 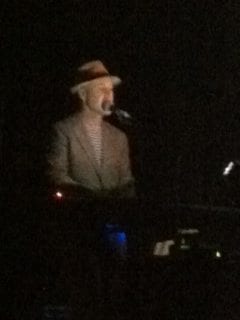 The stage had Dolby on one side, with keyboards, a few small lights in his work station, and computers.  In the middle, there was a sizable screen, but not so large that it was unusual.  And to the other side was another musician who had a guitar, some percussion equipment, and some other oddities in his work station.

The first half of the show featured Dolby performing along with his self produced move, The Invisible Lighthouse.  The basic plot being that the lighthouse very close to Dolby’s boyhood home in Suffolk England was being decommissioned.  This, along with the reality that the land and water surrounding Suffolk England are radically changing, both as a result of climate change and the unique reality that England is tilting a few milimeters a year toward the East, means that the region in which Dolby grew up is changing.

The autobiographical exploration that Dolby takes us on along with him features the charm and wit you expect from him, and gives him an opportunity to narrate and play along with the movie, performing music that is both from his earlier catalog (Europa and the Pirate Twins, a favorite of mine) and other music with which I was not familiar but seemed to be either fit into place or written specifically for the movie.  Along the way you pick up insight both into Dolby’s upbringing and personal history, his rise unexpectedly to US fame, and what it must have been to be an unusual and artistic boy growing up in that part of England.

The music is both vocal and atmospheric.  One of the great parts about the whole performance along with the movie was the mix of media that he was using-  the other musician didn’t just use samples for sounds that accompanied the movie, rather when Dolby is in a boat, Live Foley artist Blake Leyh supplied the sounds of gentle water by running his hand through a container of water with a microphone, and had other methods to add sounds including footsteps, wind, aeronautical equipment, and an assortment of odd instrumentation.  The whole concept brought a very cool vibe into the performance, a mixture of modern technology and tricks that may have been commonly used in the “Golden Age of Wireless.”  (Foley artists match film images with live action sounds.) 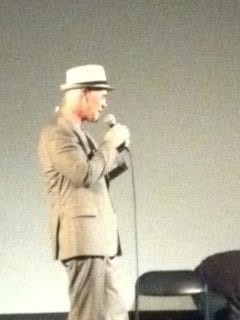 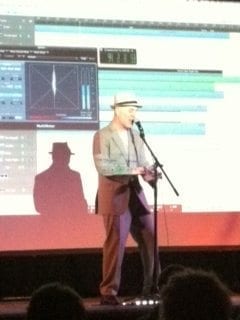 It’s easy to get caught up in Dolby’s journey, and while there doesn’t really appear to be a destination to this particular sojourn, like so many journeys is pleasant in and of itself, and a very clever way of devliering a story and music to an audience that in America, may never have heard it.  This is a perfectly sneaky way of getting people interested in his current works, and Dolby delivers an entertaining and engaging performance. 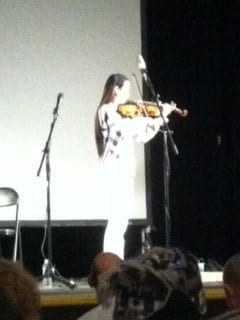 performance.  As a result of his international touring, Dolby has become acquainted with a great many people, and he uses this tour as an opportunity to catch up with this folks.  To this end he brought out Benjamin Zander, the director of the Boston Youth Orchestra.  They discussed famous English composer Benjamin Brittain, who was also raised in Suffolk England, and his effect on Dolby and on classical music in general.  Zander than introduced a prodigy from the Youth Orchestra on violin, whose name might have been Yuki Pebu, but I couldn’t quite make it out any time he announced her name.  She performed a beautiful and haunting violin piece accompanied by Zander on keyboards, and her performance was nothing short of stunning.  (The Boston Youth Orchestra will be performing at Symphony Hall on November 15th according to Zander.)

Now I would not have expected a classical violin performance in the middle of a Thomas Dolby show.  That was a part of the unexpected charm of this show.

What followed was a mini-set of Dolby material with Blake Leyh accompanying on electric guitar, but the vast majority of the sounds came from Dolby who performed in the middle of the essentially now bare stage with just a tiny keyboard, and a variety of sample triggers, both on the floor and on his keyboard.  Dolby took the time to chat with the audience, explore some of the more fascinating aspects of the songs, or their origins as he wrote them. 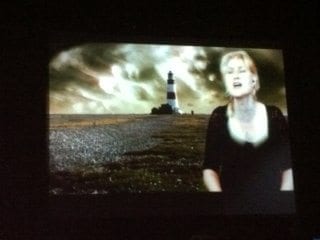 He began with the song My Evil Twin Brother.  And as his uncle who was in the Royal Navy was mentioned in the film, it was no surprise that the next song was One of My Submarines off of the Golden Age of Wireless. Next up was the follow up hit to that album, the single from Aliens At My Buick   Hyperacitve.  There were intersting projections going on the screen behind his performance, including what appeared to be Pro Tools type readings and measurements for the music, interspersed with excerpts from the original video of Hyperactive.  Backing tracks were used or triggered at times, but it’s hard to say if they were samples or actively created by Dolby himself live.  It really didn’t matter.

The final song was easy to predict but still great.  Before performing She Blinded Me with 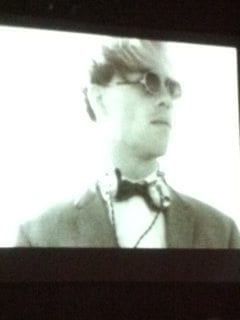 Science, Dolby told several anecdotes, including a tale of meeting one of his heroes, Buzz Aldrin, with whom he perfromed the song at an earlier appearance in the US.  Another story of the recording of the “scientist’s” parts as recorded with English scientist Dr. Magnus Pyke-  the geek in me was almost as interested to hear about the origins of his vocal drops in the song as anything else. The performance of course was spirited and ended the show.

Overall, this was a great show, and very different from most anything I’ve ever seen at a concert.  It was interesting to see how Dolby’s reaction to growing up in post World War Two England is so different than say Roger Waters.  While Waters spun his anxieties at the crumbling of the British empire into his own artistic psychosis, Dolby seems to have had a more curious and progressive reaction.  Channeling the emotions and general feel of his boyhood home into the film Invisible Lighthouse and into all of his music, Dolby brings us a piece of his personal culture and a peek into his unusual perspective and the wayward meanderings of his brain waves.