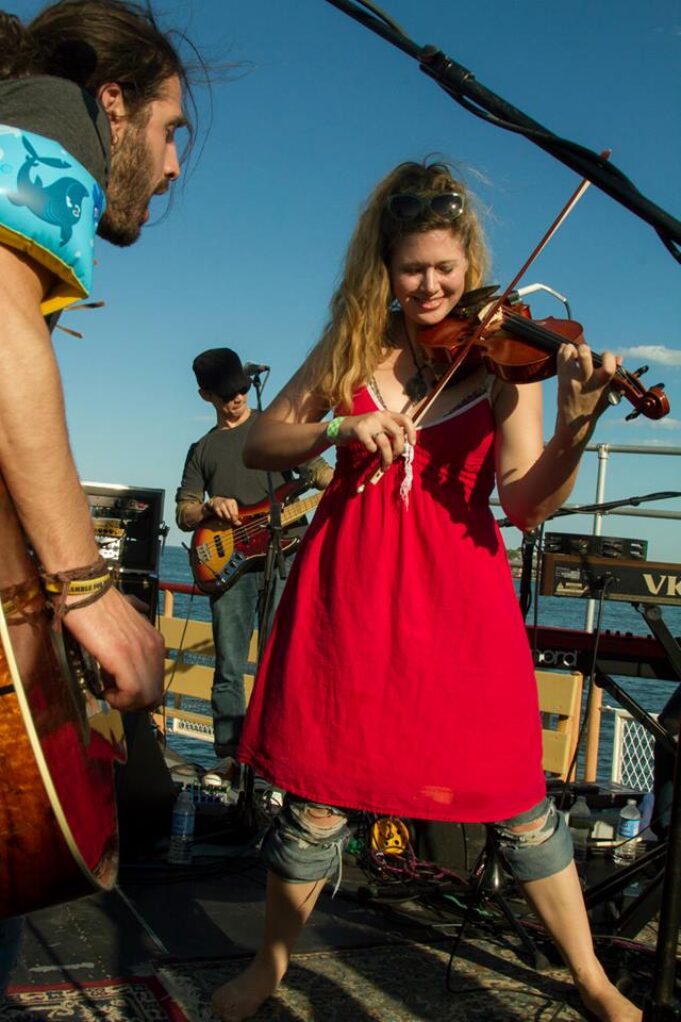 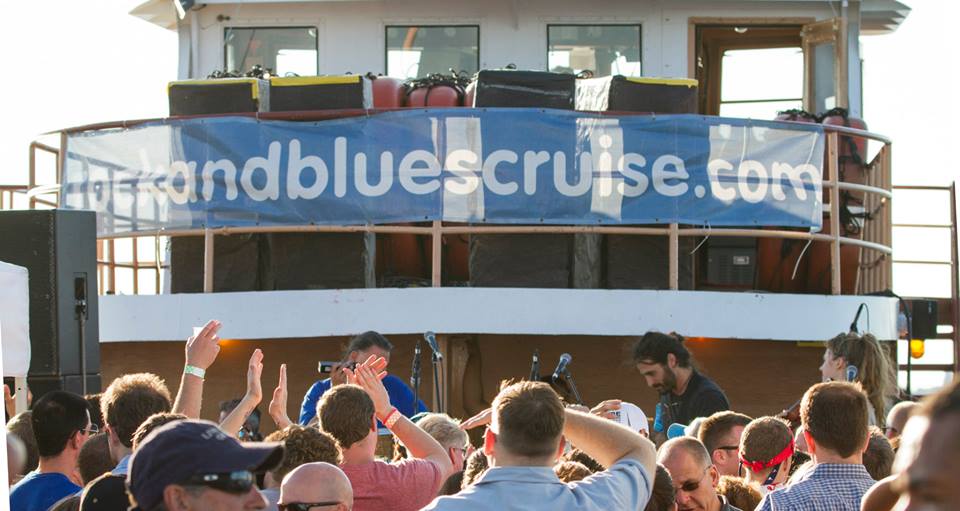 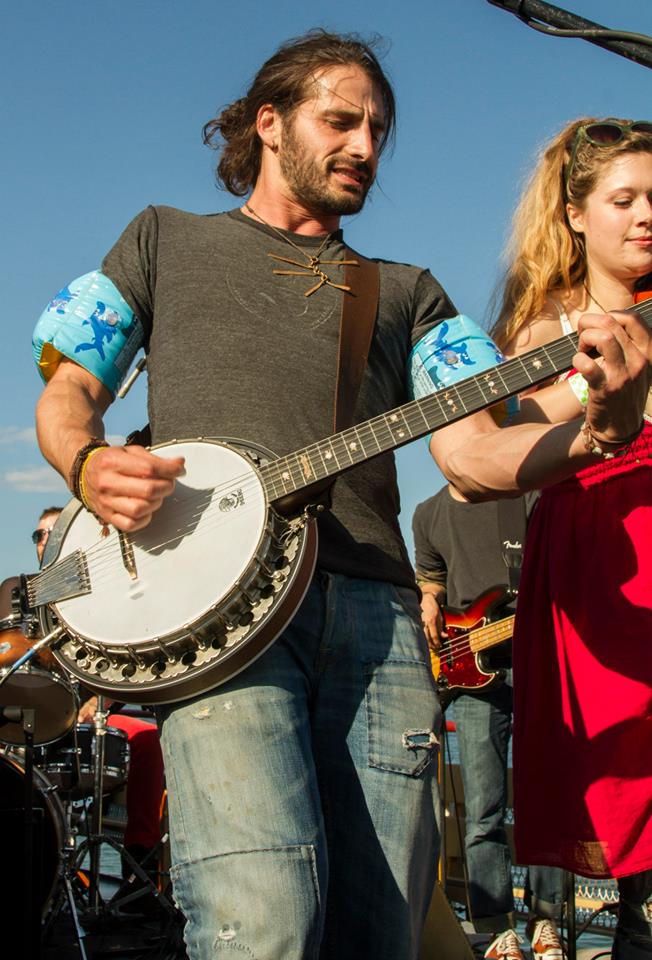 Photos by John Collins   Enter the Haggis perform their song, Gasoline, on the rock and blues boat cruise in Boston MA in the attached video section.   The morning of my third Adam Ezra Boston boat cruise dawned bright and beautiful.  We gathered up the north central MA crew and drove down to the pier.  We got a quick round at the Whiskey Priest and boarded the Provincetown II for the boat cruise.  Seriously, if you ordered a perfect day for weather, this day is what you would get, about 80 degrees, sunny, with an occasional fluffy cloud floating by and just the hint of a breeze.  Perfect day-  CHECK!   I was stoked to see my buddy John Collins almost as soon as 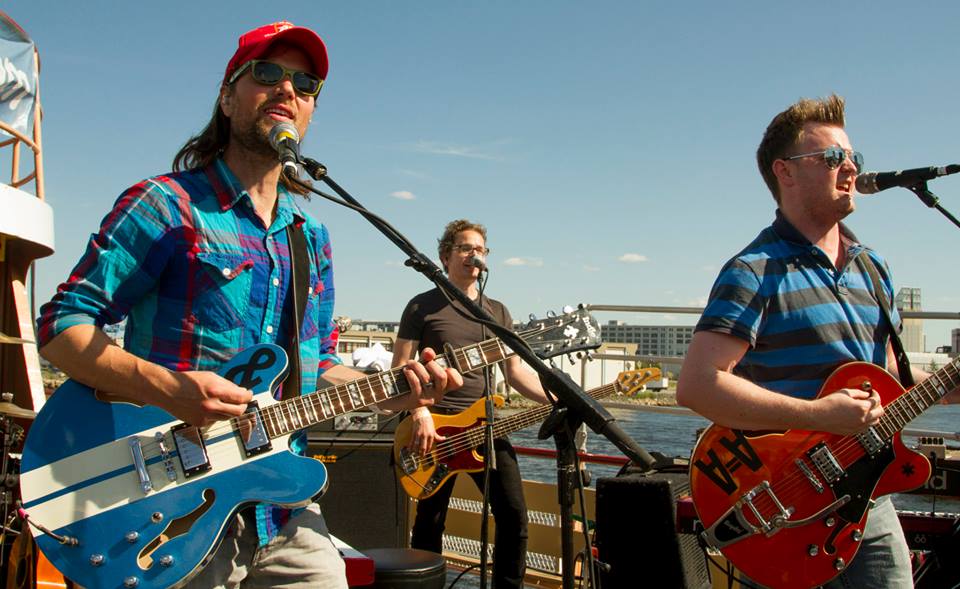 I boarded, as I knew that the tasty photos that are included in this article would be forthcoming-  THANKS JOHN! You could tell the party was going to be a good one as hundreds of people boarded the boat, many with Bruins gear on ready to have an all day experience as Boston tried to grab the Cup with game #s set to air that night. Enter the Haggis started the day off as we left the dock and started cruising around Boston harbor.  The band hails from Toronto and is a song writing focused pop / roots band, but also integrates other instruments from trumpet to fiddle to bag pipes.  From the name alone you’d guess their Scottish / Irish heritage was a big part of the music, but that’s not really true.  While there is some in there, they are not a heavily inflected band in terms of that ethnic crossover sound.

The band didn’t grip me that much at first, but as they warmed up, got acclimated to the rocking of the boat, and got engaged with the crowd their sound and vibe did get me for sure.  Last two songs were really great, in particular Gasoline which had plenty of opportunity for audience participation as well as a great fiddle breakdown.

After a short break for a beer and a smoke or four, it was time for the main event, Adam Ezra Group. The band hit the stage and you could just feel the joy not only from them, their focus has been on this boat cruise for a long time and its become an annual tradition and you could just see them soaking it up- but also from the crowd.  The Adam Ezra Group fan base is devoted, and their anticipation of a fun day cruising with their favorites troubadors was palpable. 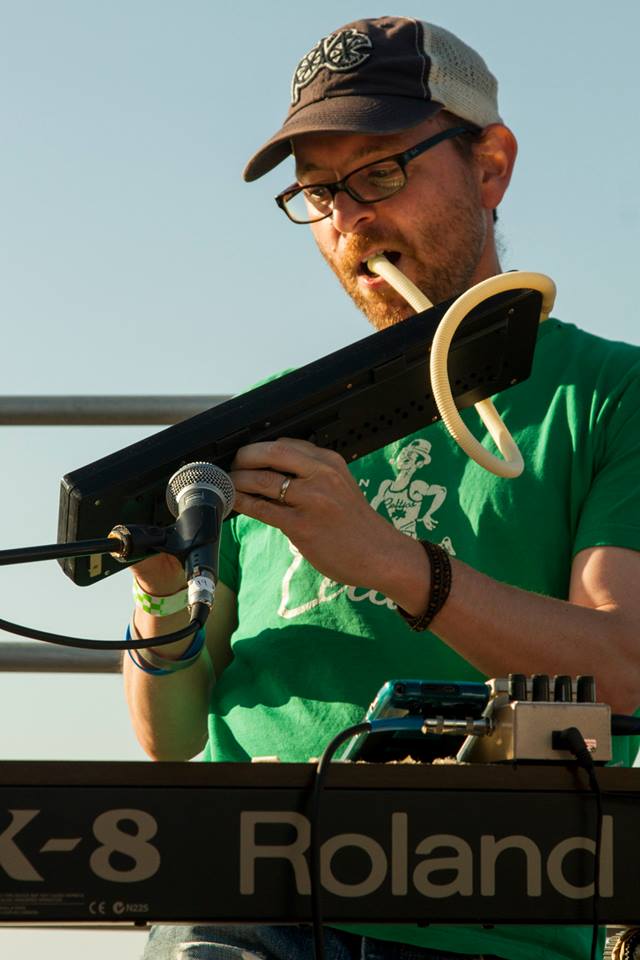 Adam was dashing in his normal garb plus swimming floaties, and smiles were all around the band.  On her first cruise is Corina Smith, the band’s new fiddle player.  In addition to sawing away in perfect compliment to the band, she brings a great vibe to the band, the Yang compliment to Adam’s Yin.  Coupled with Adam’s occasional forray on the banjo it gives the band the ability to really delve into the roots Americana music that they are known for writing, and by adding these Amercian instruments to the mix it lends even a greater level of orchestration available to them.  This was evident from their own material from newer songs including Miss Hallelujah and Takin’ Off, to older material like Flying, Katy, and the Basement Song. But never was it more evident than in the brand new Adam Ezra Group song making a splash on Youtube and at his live shows.  Featuring sawing fiddle and salty language, the band’s take on the Charlie Daniels classic turned New Engalnd centric thrilled the crowd.  The Devil Came Up to Boston is just classic Adam Ezra-  both joking and serious, both an inside joke and something easily understood by everyone, and both Boston themed and universal, the current release by the band made a huge splash for the crowd on the boat. Along those same lines is the classic take by the band on I’m on a Boat.  Originally “recorded” by the Lonely Island guys on SNL, the 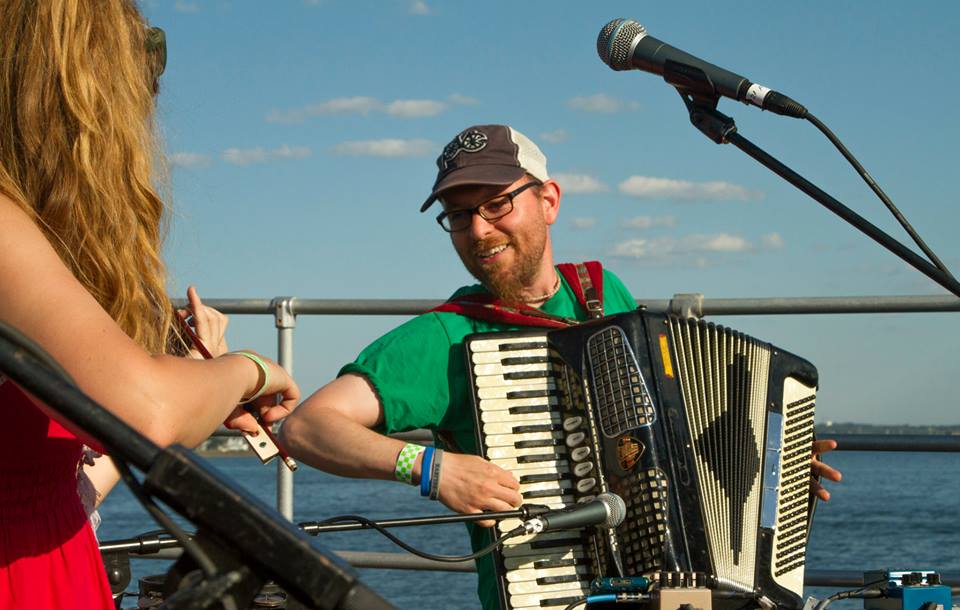 Adam Ezra Group version has been a staple of these boat cruises.  Again featuring salty language, this year’s version focused on keyboard man Josh Gold, who did a vocal introduction and great additions on the hooter.  Smith joined in on the fun donning some sun glasses for that tune and singing along to the bridge.  These cuts, in addition to the full set of other material presented by the band, perfectly summed up the feelings of the day-  have fun, make fun of each other, soak up some sun, and be together. 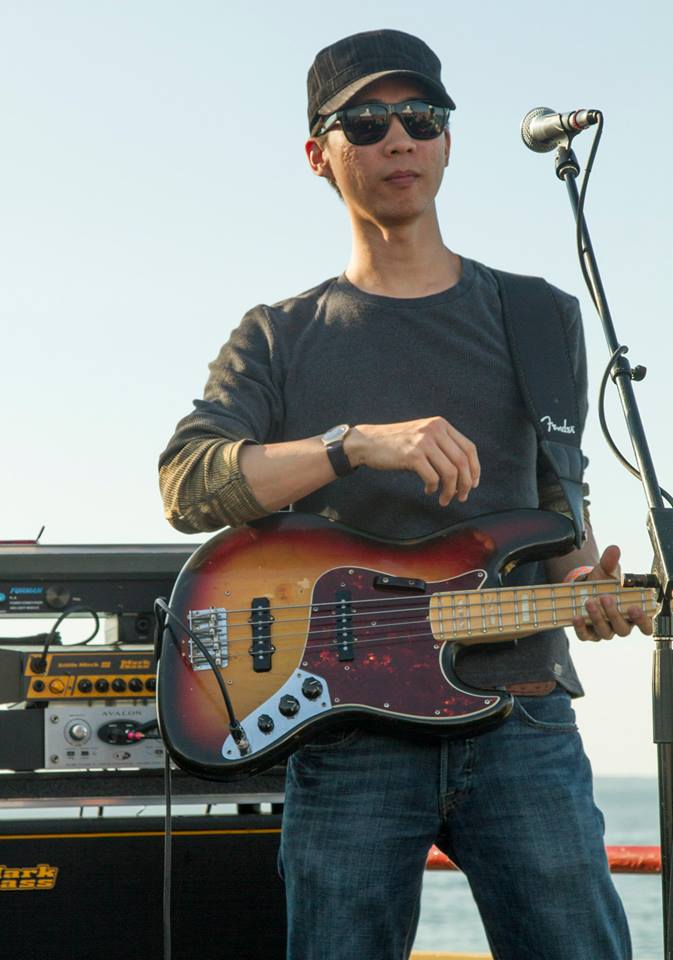 Other highlights of the set list included Western Man, Burn Brightly in which Adam free wheels on the vocals telling stories, and the current AEG staple and modern folk classic, Wagon Wheel. While Adam had everyone’s attention, he mentioned the new chairty he’ll be working with over the next several months.  He took the opportunity to announce his big charitable event, The Ramble, that will take place on Salisbury Beach on August 24th and this year will benefit homeless benefits, by raising money, awarenes s, and by conducting drives to collect toiletries at his upcoming shows.  So why not do a little good while having so much fun- it’s the Adam Ezra Group way after all. The final song came all too early and Adam asked his friends in Enter the Haggis to come back up on stage, forming a power band of every memeber of both groups, to take the boat into shore with a spirited version of Tom Petty’s Freefallin. Okay, so maybe it wasn’t the best version I ever heard of it, but the camraderie felt by everyone on the boat, the feeling of community that was fostered on that day, were all realized as everyone sang 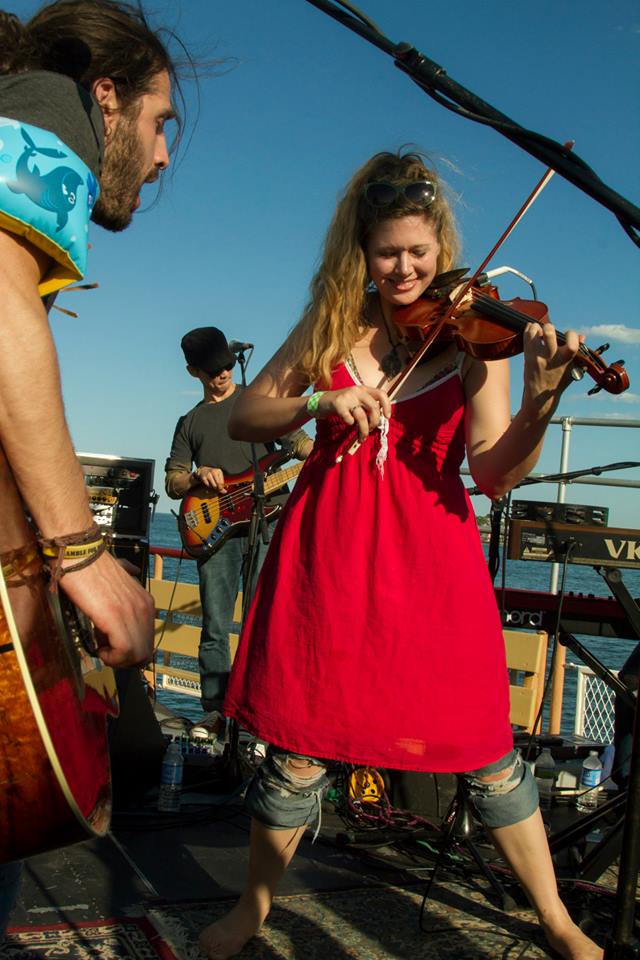 along to one of the most recognizable songs of the last twenty years. Check out video of Free Fallin’ in the attached video section. The day was too short, but thankfully there are many more shows to come!