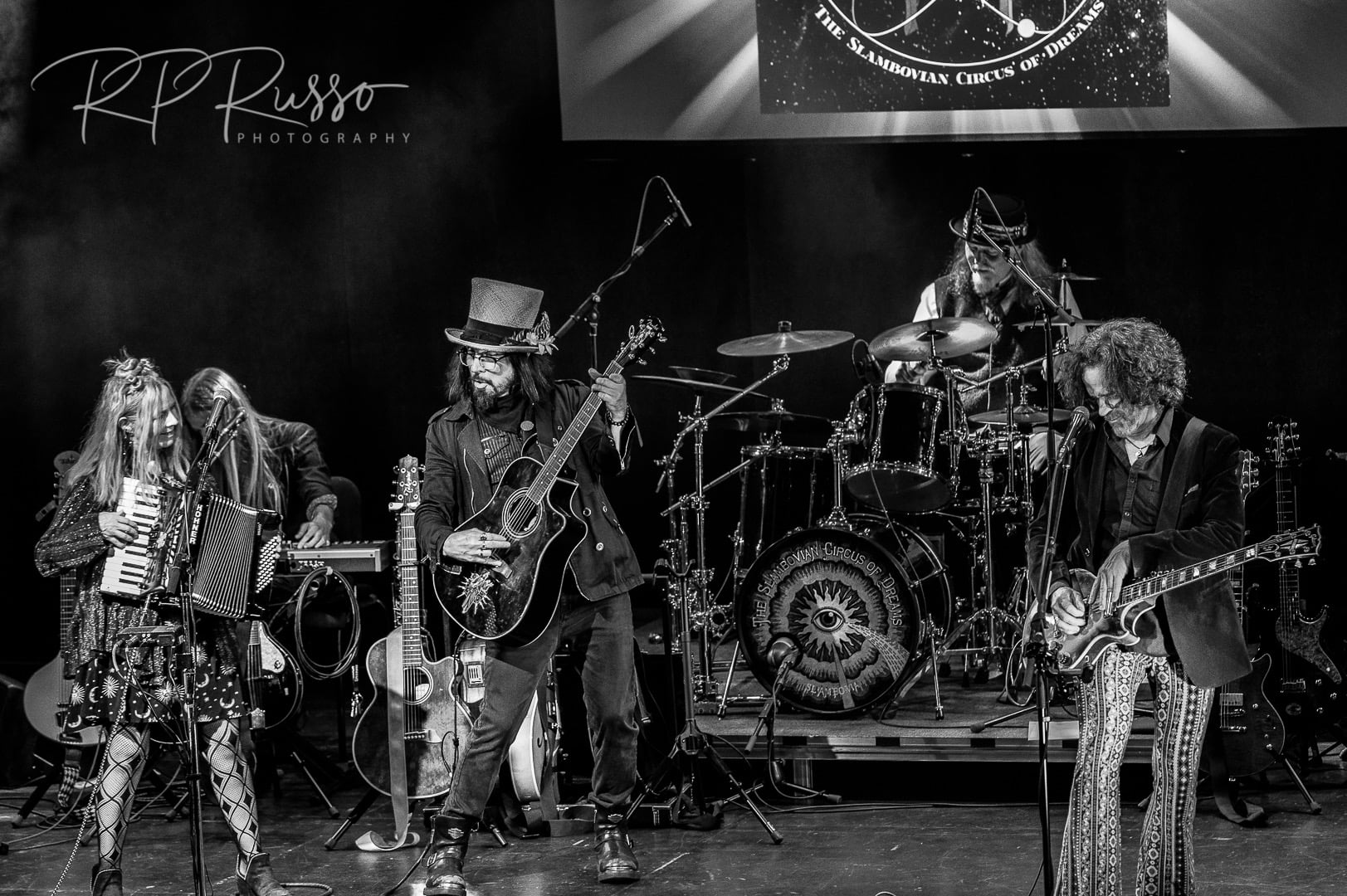 A rootsy rockin’ psychedelica, The Slambovian Circus of Dreams have been expanding the borders of the Americana genre with their fantastic stories and performance since the late 90’s in Sleepy Hollow, New York. Their connection with audiences taps into a greater human-ness and captivates with charismatic band leader Joziah Longo center ring presiding… Joined onstage by bandmates Tink Lloyd (accordion, cello, mandolin, flute) and the guitar-slinging skills of Sharkey McEwen, the Slambovians create a show that is constantly evolving “with a little help from their friends”. 2022’s line-up features RJ McCarty (bass, keys, sax), Bob Torsello (bass), and Matthew Abourezk (drums). Elements of Dylan, Bowie, Incredible String Band, Syd Barrett and The Waterboys flavor the musical mix (Waterboys co-founder Anthony Thistlethwaite is on the band’s new album). Add a good dose of Woodstock-era psychedelia framed in solid songwriting, and you have it. Touring in support of their new release, A Very Unusual Head, the band has a full schedule in 2022 touring the US and the UK headlining the Wickham Festival, Fairport’s Cropredy Festival, and more. They’ll be making their debut at Shea Theater Arts Center in Turners Falls, MA this Friday, July 15th- tickets are available HERE.

LMNR: Thanks for agreeing to be interviewed, Tink! Why don’t you tell us a little bit about yourself: your musical background, your history with the Slambovians, anything else you care to share to provide some context for newcomers to the Circus of Dreams.

Tink Lloyd: I come from a family of Irish musicians, grew up playing flute. I was drawn to the accordion in the early days of forming the Slambovian Circus of Dreams. Joziah, Sharkey and I formed the band. The simplicity of being “unplugged” and doing open mics in the northeast was really appealing after playing New York clubs during the 90’s. The emotional quality of the accordion was a real compliment to Joziah’s songs, which are the centerpiece of our music. Playing the folk/singer-songwriter circuit was an experiment that worked for us. My accordion paved the way to that whole world. People laughed when we showed up with my little white accordion, but they’re not laughing now! We were pre-Arcade Fire, and Americana wasn’t even a concept. We were pioneers.

LMNR: How did the pandemic lockdown affect you, personally, as well as your musical career? Did you use it as a chance to relax and take a beat or were you lost without live music. . . or a mix of both?

TL: Like a lot of musicians during the pandemic, at first it was like being in an elevator that was in free-fall after touring all the time.

It took a while to land, and then realize we had to learn new skills to be able to deliver shows to our fans. We ended up doing loads of video work, broadcasting two festivals and filming a Christmas show. I like live shows – you do the work and it’s done! We did get our new album, A Very Unusual Head done finally due to the extra time and energy we had. It was 6 years in the making, the last song recorded, “Stand” was done during the shutdown – all in separate studios.

LMNR: To build on that, how are you feeling now that touring is a thing again?

TL: On a fundamental level, the communing of artists with their audience fulfills a primal need. Separation is not how we were wired to exist, everything is better when we put our hearts and minds together…

LMNR: Do you have a favorite story from the road as a musician?

TL: That is a hard one. Hmmm… we were the first American band to tour China back in the day ….when we played in Shanghai, the people cried. They loved us like long lost family reunited.

LMNR: Do you have a favorite story about seeing a concert as a member of an audience?

TL: We saw Ringo Starr during the 50th Anniversary of Woodstock at a small venue in New York and sang “Yellow Submarine” with him. That was deep from a musical history perspective.

LMNR: How has being based out of the Hudson Valley- an extremely jampacked area of talented musicians- informed your musical sensibilities? Who in the area inspires you, if anyone?

TL: There is a history here for sure that inspires. Being around Woodstock and that legacy is always on our radar. Garth Hudson from The Band was one of our earliest fans, he was at a show when I was just learning to play and autographed my accordion while telling a bunch of accordion jokes! The support of him and his peers means a lot.

LMNR: The accordion is a fairly niche instrument in the world of “popular” music. When you add your other instruments- cello and flute- to your Slambovian repertoire, that’s a triple threat of esoterism! Is any of the three your favorite?

TL: The accordion is the most fun to play because it is so physically expressive, quite dramatic to perform with. The cello is emotive and a bit spooky! The flute is the instrument I am “fluent” in, so the most fun to play, but one or two songs a show is enough. I like to change instruments to keep people’s ears entertained during a show. I always think of myself as the Brian Jones of the band, bringing in the exotic fabrics as well as decorating each song…

LMNR: Tell us about the Slambovians’ new album A Very Unusual Head.

TL: Recorded in five studios and two countries, A Very Unusual Head was our most challenging album, with the pandemic thrown in to make it even more exciting!!! In the end we feel it is a masterpiece, with the help of so many people. Joziah as the primary songwriter of the band was inspired by the surrealist painters and Dylan growing up in Philadephia. The theme of the album chronicles a bit of that journey and honors the “outside the box” thinkers of art and science who offer alternative perspectives to sort life’s big questions.

LMNR: Anthony Thistlethwaite of The Waterboys contributed to A Very Unusual Head. How was that experience, especially considering the band lists The Waterboys as one of their influences?

TL: The fates were with us on that one! The band knows “Anto” through the shows we played together at festivals in the past.

He lives in Ireland, but I saw he was in upstate New York near us exactly at the time we were recording the album. So as a “Welcome to the neighborhood” gesture I invited him to do a few tracks on the album, thinking he’d have fun. He came and did amazing mandolin, sax and bass work on some of my favorite songs on the album. That was a dream come true for me. As luck would have it, we’ll be at the Wickham Festival just outside London in a few weeks, the same day as The Waterboys! Lucky us…

LMNR: Anything else you’d like to share with our readers? Thanks so much! We’re looking forward to your show at the Shea Theater on Saturday, July 15th!

TL: This is our first time at the Shea, I’m sure it’ll be a wonder-filled new adventure! Can’t wait! 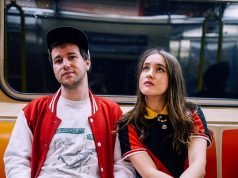