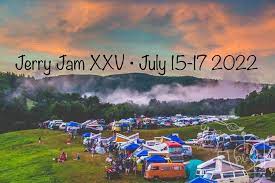 After two summers of postponement we were so ready for Jerry Jam! Much like with Strangecreek, it felt like we were coming home to one of our favorite festival sites in all of New England. This year is the twenty-fifth Jerry Jam and the pandemic postponement was torture!

This wasn’t the first trip in our new old bus, but it is still so relatively new to us that each trip is so exciting! We loaded it up considerably with musical gear, stuff for the weekend, and a full booth worth of merchandise to sell all weekend long. It normally takes about three hours but in the bus (1988 GM Detroit diesel, 8.2 L engine, 4WD, Marmon Harrington conversion on the suspension and drive train, deuce and a half winch on front, and in process of a pretty rad interior redecoration) it took us a solid four hours. But it was totally worth it as having our own raised bedroom is really a game changer for festivals.

We arrived for the ‘Day Before’ which is only open to volunteers, vendors, guests and dignitaries apparently! It is so great to get that type of entrance, as navigating the whole scene before 80% of people get there is a major luxury. We found our vending spot in our accustomed place, and got started on unloading. It takes a few hours to unload and set up a vending booth and we were extra motivated.

After a while I wandered by the stage and noticed that the lighting rig wasn’t flown, and there was a general state of concern. Apparently there was a technical snafu and the start of the main stage music, which was only to be two bands on this night, was delayed a few hours. No worries! This gave us even more time to set up and get settled. We ate sandwiches, and greeted friends as they started to arrive.

After that delay Sly Richard took the stage. MAN, this is a great band. I had seen them really only at Jerry Jam; and I remember liking them more and more each year. Though I didn’t think it was possible I liked them even more this year! The band is dank, swampy, and soulful. With dashes of soul music, southern rock, and classic blues inflected rock Sly Richard really has an amazing vibe. The band members are super comfortable with each other, and understand the band’s mission and everyone does an amazing job achieving it. The band consists of Chris White, vocals, Tyler Drabick, Hammond organ, Tommy Lada, bass, Jared Steer, drums and Dane Anderson, guitar.

Whole show audio below, use arrows to toggle between songs.

Their set started with the classic “The Letter” who most people know through the version by Joe Cocker. I just personally assume if I don’t recognize a song that it’s an original but of course I don’t know if it’s true. The covers were a gumbo of southern soul classics including Dr John, Alan Toussaint and the Meters among others. Each song was carefully crafted, and the execution was perfection. I have to say I am now a big fan of the band and will keep an eye out for another opportunity to see them.

It is notable that even though this festival is Jerry Jam, and there will be Grateful tributes galore all weekend long, neither Sly Richard, nor the next band did any Jerry Garcia material at all. Attendees at this early stage still had their energy, and their ears, and were ready to accept any kind of music in this beautiful setting.

Let me describe it! Klay Knoll Farm has a perfect festival field, a giant and wide swath of land big enough for entrance, parking, a big vendor row, then a plenty big concert field and stage area, and then another vendor row, and then another huge camping area for attendees, all on this perfectly flat and wide plain. But there is an amazing and picturesque hill that grades up a few hundred feet and has a rolling plateau on top that allows for tons more camping. Jerry Jam is also a de facto VW bus convention and the entire front line of that plateau is reserved for VW buses. So when you are down on the field and look back at the hill ringing the entire festival, all you can see is a huge line of VWs facing you, their headlights like eyes looking down on the festivities. It makes for a perfect concert bowl and a feast for the eyes.

Up next, and last- were rice an American Band. This is the sixth time that the band has played Jerry Jam, and they almost always play in this early bird night. Each year the band brings a slightly different lineup, and this year they were a six piece band. rice veterans Brian DiMartino on guitar, Steve Benson now on keys and vocals and harp (and not sporting his mandolin and pedal steel rig as he had in the past) and Phil Simon on guitar and vocals were joined by now longtime members Lauryn Winiarski on bass and vocals and Kyle Heon on drums. Newcomer Tobey Sol LaRoche was in the band for the first time at Jerry Jam.

The band opened with intense energy bursting on the stage with Grand Funk Railroad’s “We’re an American Band.” rice played a lengthy set from midnight until 1:45 AM, mixing originals and covers. Simon takes the vocal lead on just over half of the material with Benson and Winiarski handling some vocals, too. Tobey Sol LaRoche took his own turn on lead vocals toward the end of the set covering the Flaming Lips’ “Yoshimi Battles the Pink Robots.” Other covers included Benson’s turn on Warren Zevon’s “Lawyers Guns and Money” and a new rarity in “The Breakup Song” by the Greg Kihn Band. Other covers included the set closer “Comfortably Numb” by Pink Floyd.

rice originals span from songs that Simon wrote decades ago like the political “Twenty Five Years” and the second song of the set “Flow of Things” which opened with LaRoche on Navajo flute to start. But most of the originals are songs written for this band and will be released later this year on the band’s first EP.

The night turned cool as rice finished their set and Jammers were retreating to their buses and campers and tents. Alas, we all could not spend too much energy on the first night, or even the eve of the first night.

Whole show audio below, use arrows to toggle between songs.