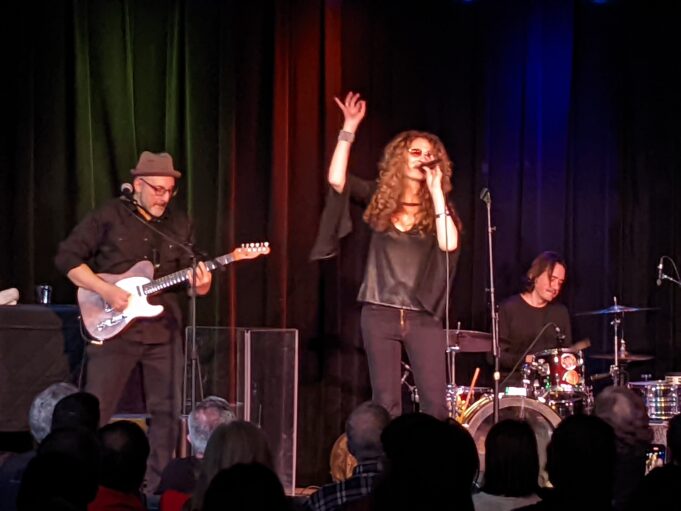 April 02 saw the return of Dana Fuchs to the Center for Arts in Natick MA. Review by Jennifer Simon

I was lucky enough to catch Dana Fuchs’ return to the TCAN stage in Natick on April 2nd.  She was there promoting her upcoming album Borrowed Time which was just released on April 29th. Fuchs’ show was a celebration our collective release from this round of Covid confinement, also.  She was joined on stage by long time writing partner and guitarist Jon Diamond, bass player Brett Bass and new arrival drummer Richie Monica.

Fuchs played a single long set running almost two hours and covering thirteen songs.  If you were worried that 2 years without singing to an audience had softened the growl in her voice or robbed her of those great high notes, fear not, she sounded great.

Ready to Rise – which started us off right away with her Janis Joplin style vocals for this blues tune.

Bliss Avenue a rocking blues song she wrote in 2013

Handful Too Many – an up-tempo blues tune featuring Fuchs on percussion.

Faithful Sinner a ballad she wrote for her dad about love and faith.

Aint No Body’s Fault – a cover of the Otis Redding soul – funk song.

Home is where the Hatred Is

I’m thinking about you but I got Nothing on My Mind – a country tune.

Battle Lines written in 2018 about the passing of Fuchs’ mother.

Curtain Close was a passionate song from Fuchs’ new album about the passing of a friend and finished out the evening. The crowd, satisfied and amazed by Fuchs energy and talent, sauntered off into the blue night.

Not from this show, but a celebration of the upcoming album release.