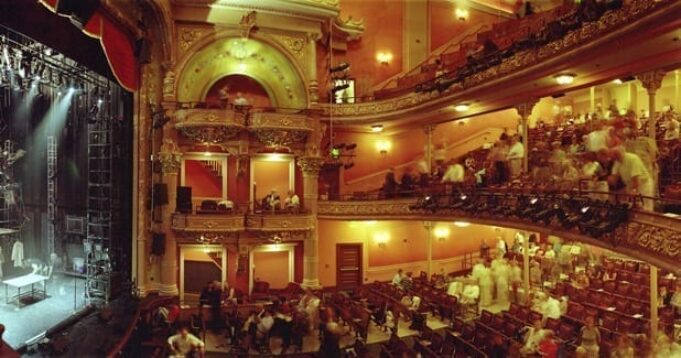 I had the strange fortune of finding myself on the phone with Jerry Marotta a few months ago- and I was the kind of teenager who would read the notes whenever I purchased a new album and the name was ringing a bell for me. So I did a quick search while we were meeting on the phone to discover his significant history.

Jerry was the drummer on too many classic albums to name including the first four albums by Peter Gabriel, plus releases by Hall and Oates, Paul McCartney, Orleans, the Indigo Girls and many others. So when I heard that Marotta was bringing his ten piece tribute to Steely Dan to western Massachusetts at one of the finest venues in the area, the Colonial Theater, I was ready!

We assembled a crew and got to the area and went to dinner down the street at Otto’s which was great. We ambled back to the theater and joined a couple hundred fans in this ornate and gorgeously appointed room to settle in for the show.

The band features Marotta on drums and a whole host of amazing instruments covering keys, bass, guitar, percussion, vocals and a four piece horn section. They fired into the show and unfolded two full sets of Steely Dan music ranging from the obscure to the most popular hits. Deftly maneuvering from one song to the next, the band is a giant vehicle of sound and texture, effectively capturing the tones, character, and spirit of this most revered song book.

The singers were both amazing: Joey Eppard is an incredible talent. It’s no secret that Donald Fagan has a voice that is unique, and Eppard is able to capture those qualities while displaying a range and vocal adeptness that is rare. His range and dexterity are remarkable and brings the band to a level not heard elsewhere in any other Steely Dan tribute, and is rarely achieved in any ensemble. He’s joined by Lindsey Skeye who alternates between supporting vocals and leads depending on the song. The two vocalists share the spotlight and lean on each other with great comfort, and you get no ‘lead singer’ vibes off of either of them. Their spirit exemplifies the spirit of the whole band, each person contributing greatly yet subtly to the overall sound of the band.

David Jameson on keyboards sticks out as a backbone figure in the band. While he does take solos here and there, it’s his steady hand steering the whole ship melodically and rhythmically that is impressive. The rhythm section that he joins is of course anchored by Jerry Marotta on drums and also vocals, plus Seth Glassman on the bass. Together they are rock solid, with Jameson giving every bit of emotive energy to the keys that one might expect from Fagan’s repertoire.

But I have to say I was truly enamored with guitarist Matt Finck. This guy is a monster. He rips the leads of Walter Becker with a fluidity and ease that is stunning. I noticed it in videos of the band I had watched from earlier performances, and I was equally impressed with his live performance. He is not jumping off of amplifiers, or posing- rather he is letting fly incredible fretwork song after song with an ease and tranquility that is rare. His playing felt more like craftsmanship- as if he could just as deftly be preparing a flambe, drawing up plans for your home addition, or assembling a ship in a bottle. He has a blue collar approach to his instrument that defies the incredible complexity of the material. I was so pleased that he was just as good as I had hoped.

Any proper Steely Dan show will have a horn section, and this collective was right on target. Chris Pasin handled the trumpet, Don Mikkelsen trombone, and Jay Collins and Bill Harris split the saxophone duties. Collins even had his chance to come up front and sing one, too- belting out Hey Nineteen from center stage having descended from his horn section perch.

Two sets unfolded with all of the classics: Do It Again, Peg, Kid Charlemagne, Rikki Don’t Lose that Number, and more. Even less familiar songs (for me at least) like Cousin Dupree, FM, Pretzel Logic, and Deacon Blues were in the mix. The show came to a climax with the band’s obvious finale choice, Reelin in the Years. After a mere head nod to the side of the stage Marotta announced that they’ll just go ahead and play another song without the stage exit and the band sent the audience into the night with a spirited rendition of Bodhisattva.

If what you want is a night of Steely Dan music played to perfection with the most talented players you could assemble, than Reelin in the Years is going to be the show for you. Timeless music played by the masters, it’s why we see live music.