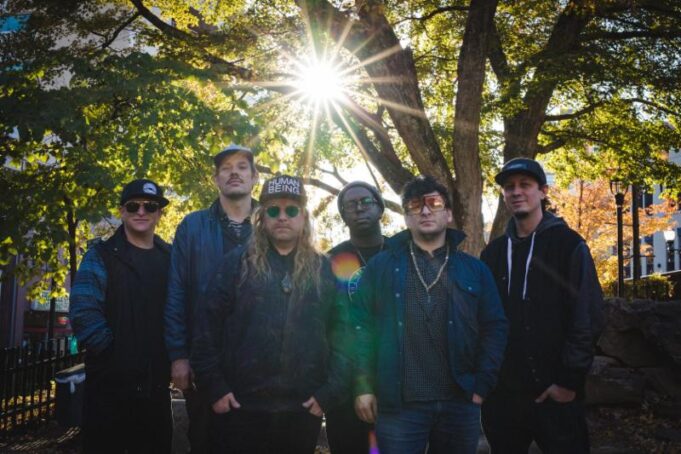 The consensus right now seems to be unanimous: Lettuce, the Brooklyn-based, eight-piece funk powerhouse band, is at the top of their game. With a new album, Crush, released in November and receiving wave after wave of deserving praise, and with a full fall tour of awesome performances already behind them, it’s hard to argue otherwise.

One of the neat parts about this band, though, is that they are pushing forward in the wake of an equally celebratory past, one that developed alongside some pretty neat friendships in the beginning.

The inception of Lettuce, in Boston circa 1992, came about with a sense of mutuality to begin with. Guitarist, and at the time unofficial band leader Eric Krasno, met fellow bandmate Ryan Zoidis in their chamber ensemble at music a summer program; their similar interests in the styles of soul and funk music brought them to jam together, and also eventually with other bandmates Adam Smirnoff, Adam Deitch and Eric Coomes.

As they began playing more professional gigs, in bigger and more popular venues like the Iron Horse, Krasno began sending tapes to not-much-older music impresario Peter Shapiro. The latter started booking them at the renowned NYC music club that he had just become owner of, the Wetlands Preserve. As both band and impresario’s musical journeys took off into the 00’s, their musical appreciation for one another also always stayed strong.
Shapiro founded his second big place in 2009, the Brooklyn Bowl, and the Williamsburg hotspot has become a regular home for not only Lettuce but its individual members’ solo projects as well, like Krasno’s band Soulive which plays a multiple-weekend, musical guest-featuring run there every Spring, known as Bowlive.

Most recently, Lettuce played a two-night stand at the Bowl on Jan. 1 and 2, where crowds packed the place each night to see Brooklyn’s favorite hometown heroes rock through tunes from the new studio effort.

In 2011, Shapiro was in charge of re-opening a second music-lover-mecca, The Capitol Theater. Constructed originally as a vaudeville and cinema house in 1926, the building is steeped in multiple eras of vibrant history. In the 1970s, it reopened for the first time and hosted many of early rock history’s biggest acts, from Pink Floyd to Joe Cocker to Frank Zappa, in addition of course to countless shows played there by its most celebrated jammers, the Grateful Dead.

When they reopened it, Shapiro and friends funded a multimillion-dollar renovation process, outfitting the theater with state-of-the-art sound and lighting equipment. In just the past few years, it can already claim to an impressive list of performances, beginning with Bob Dylan-who was booked for the place’s first show after reopening-and inviting other giants like Robert Plant, Steely Dan, the Strokes, and more.

Keeping alive a warm sense of community, both past and present, and musical and otherwise, it’s really a special place. Half of the fun of seeing artists like Phil Lesh and Warren Haynes play there is knocking back with the sprawling crowd of deadheads and younger music enthusiasts that flock the surrounding streets and turn the interior rooms into one-of-a-kind heady parties. Those who have seen a performance at the Theater have felt the whole of its magnificence, even if it’s been just one show. That’s all it takes.

It also makes perfect sense, then, given the long-standing relationship, that Lettuce has been welcomed by Shapiro at The Capitol as well. The January 23 show will be the band’s second gig there, and given their current creative prowess, it will undoubtedly be nothing short of incredible.

You can currently stream Crush in its entirety on the band’s website, and purchase tickets for the show here.

Share this article link on social media, and sign up for the LMNR newsletter list.  You will be entered to win, contest drawing will be at 4:20 PM on January 20th, 2016.  Good luck!

Lettuce at the Cap