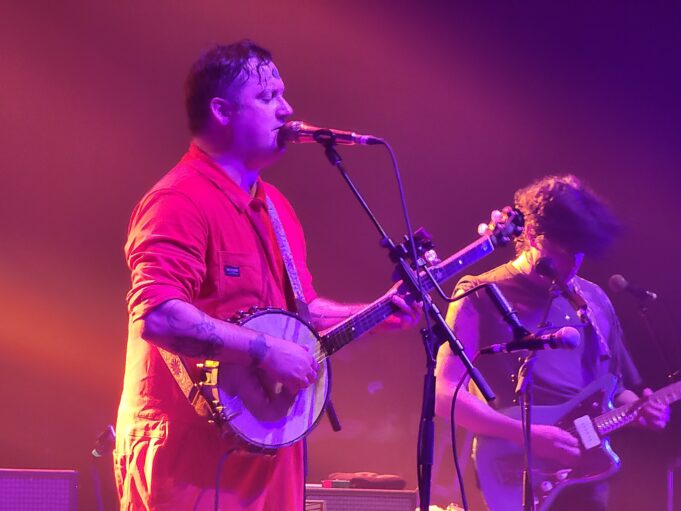 by Andrea F Flohn with images / videos by Evan Franks

On Thursday, August 5, 2021, Modest Mouse performed at The Met Philadelphia for a crowd of nearly 3,000 excited fans who had long awaited an appearance from their favorite band. The Portland-based group just released their seventh studio album this year titled “Golden Casket,” which features a few new favorites like “We Are Between” and “Fuck Your Acid Trip”. The new album takes a dive into some of leading man Isaac Brock’s observations of our society; the ways in which people are marginalized, the conspiracy theories, and the overall disconnect he feels we have created.

Following the release of “Golden Casket,” the band set out on tour and sold out their first show at The Sylvee in Madison, WI. Throughout the upcoming week, they’ll hit some major venues along the East Coast including College Street Music Hall in New Haven, CT and The Anthem in Washington D.C. The band is also set to play a three-night run at Brooklyn Steel in NYC, but fans will be hard pressed to find tickets to the sold-out event.

But it really isn’t any wonder why their shows are selling out fast after a global pandemic. It seems as though we’re all still trying to make sense of this new reality, and groups like Modest Mouse have been at the forefront of alternate perspectives since the early 90’s. In addition to all of the strange and wonderful sounds heard over the course of a Modest Mouse record, one madman whispers and screams the secrets of the universe to anyone listening. And perhaps in this strange new time, a madman really knows.

The Met Philadelphia is a 3500-capacity, fully restored opera house which devours one whole block of Broad St. In lieu of Thursday’s Modest Mouse show, the venue’s seating options included rear orchestra, loge, mezzanine, panoramic box seating, and GA pit, however the pit is often occupied by seating during other events.

We arrived at the venue at 8 PM, and through the main doors we heard the opening act, The Districts begin their set. The folk punk group hails from Lititz, Pennsylvania and has previously opened for Modest Mouse. Their performance on Thursday night included songs such as “If Before I Wake” and “Cheap Regrets.” As an added bit of fun, during the band’s last song the thick fog pouring from the stage actually set off the fire alarms! After a few moments, the wailing ceased and leading man Rob Grote laughed into the microphone saying, “Guess that means we’re on fire tonight!”

After a long wait under the house lights, Isaac Brock, Jeremiah Green, Tom Peloso, Russell Higbee, Ben Massarella, Darrin Wiener, and Simon O’Connor took the stage. Isaac, who is typically dressed in a button-down floral shirt was donned in a bright orange jumpsuit. Yes, like the kind they wear in prison. They began with “Dramamine,” creating a unifying chant among the crowd. They followed with “Back to the Middle” which is the last track on their new album.

Next, the band brought the show straight back to the 90’s with “Cowboy Dan” from The Lonesome Crowded West”. Like many of the songs from this album, “Cowboy Dan” features a variety of unique percussion instruments used to create a mental scenescape, while also highlighting the poetic format in which the songs are performed. The band’s next song, “Bury Me With It” from “Good News For People Who Love Bad News”is another great example of this. The band followed up with another new track titled “Wooden Soldiers.” Other highlights from the show include “Gravity Rides Everything,” “Satin In a Coffin,” “Shit in Your Cut,” the ever beloved, “Float On,” and “I Came As a Rat.” At the close of their set, Isaac thanked the crowd, and the stage went dark.

They returned shortly thereafter to perform a five-song encore which included “Fuck Your Acid Trip,” “Fire It Up,” and “The Ground Walks, With Time in a Box.” With all of my might, I yelled my request to the band, which was “Broke” from “Interstate 8”. To my delight and the delight of the mega Modest Mouse fans in front of me, the band performed the song. We high-fived and jumped up and down in wild excitement. The band ended officially ended the show with a performance of “Bukowski,” which features Brock on banjo.

The crowd thanked the band with wails and applause and the musicians faded for good into the blackness of backstage. Before the houselights came back up, we all spoke excitedly and begged the band to come back for more. Several clusters of fans gathered around the rail and tried to snag a setlist. After snapping a photo of the list for ourselves, we headed to the exits and thought about grabbing an album before deciding the show had been enough fun for one night.

Encore:
Fuck Your Acid Trip
Fire It Up
The Ground Walks, With Time in a Box
Broke
Bukowski