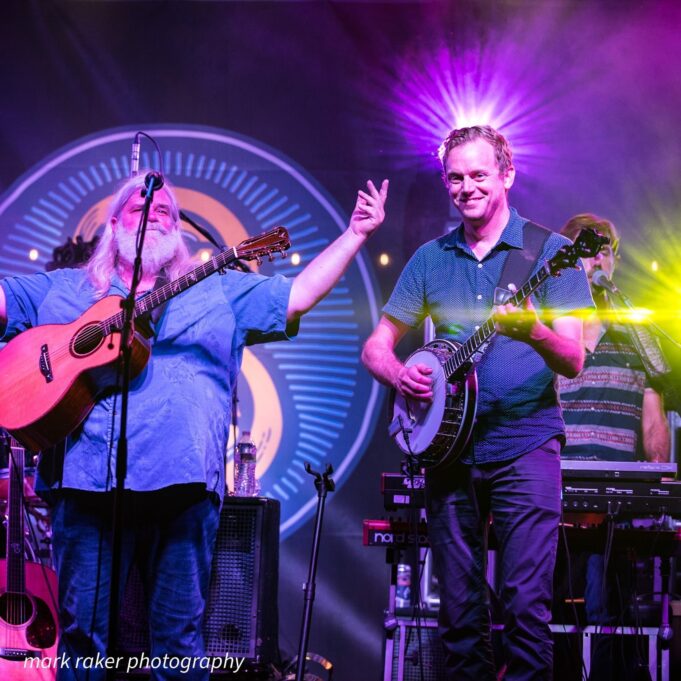 On Friday, July 16th, Leftover Salmon made their first appearance at the B Chord Brewing Company in Round Hill, VA. The Colorado-natives admittedly ‘had no idea what they were getting themselves into’ when they agreed to play a three-night run at a barn in the mountains, according to Leftover Salmon’s leadman Vince Herman. B Chord’s 20-acre spread was carved out of the base of the Blue Ridge Mountains and became part of the Loudoun County Ale Trail in 2017, which brings over thirty local breweries in collaboration for community recreation and events.

We arrived at B Chord at the tail end of an opening set by four-piece string band Hank, Pattie, and the Current.  The band consists of Hank Smith on banjo and Pattie Hopkins Kinlaw on the fiddle. Smith and Hopkins were joined by Stevie Martinez on the upright bass and Billie Feather on the guitar. Hopkins, Smith, and a multi-instrumentalist from the Shenandoah area called Danny Knicely made several guest appearances later in the show.

Around 7 PM that evening, the same sun that had baked the mountains all day began to sink in the sky. The patrons, who were mostly spread out along the shady side of the hill or otherwise hanging inside a tent, welcomed Vince Herman, Drew Emmitt, Greg Garrison, Alwyn Robinson, and Andy Thorn to the stage with warm applause. Multi-instrumentalist from Seldom Scene, Jay Starling also joined the band on keys that evening.

“Howdy y’all. It’s Friday night!” Herman shouted to the crowd, before launching into an always joyous “Carnival Time,” which features Herman on vocals and a Cajun-style rhythm created by Thorn on the electric banjo and Emmitt on Mandolin. The song also features some fantastic work by Starling on keys. Next, the group played through two old favorites: “All Night Ride” and “Long Hot Summer Day”. The latter song features a bit of what the band might describe as ‘Slamgrass,’ or traditional bluegrass with an enriched, syncopated drumbeat.

Highlights from the first set include a cover of “Lovely Day” by Bill Withers and a quick-paced “Bird Call” jam which lasted over sixteen minutes and features skillful picking by Andy Thorn on the five-string, as well as a cymbal-rich drum solo by Alwyn Robinson during which Vince Herman led a “Happy Birthday” to ‘Dr.’ Greg Garrison. “Bird Call” ultimately ended set one, as it is typical for Leftover Salmon to begin with a one-hour ‘warm up’ set. At the conclusion of the jam, Vince called out to the crowd saying “We’re gonna take a short break. We’ll be right back! FESTIVAAAAAAAAL!”

Since I was seeing Leftover Salmon for the first time ever and with fresh eyes, it was easy to determine the things I liked about them. Vince Herman is a fantastic leadman who can keep the crowd reveling at just the right capacity. The band follows along with much of the same good humor, making the audience feel as though they are attending a grand musical party.

Near 8 PM, the band returned looking refreshed and ready to play a long second set. The band opened with a spaced-out jam that eventually evolved into their cover of “Black Hole Sun” which is the first track on their new Brand New Good Old Days album. Following the Soundgarden tune, the band struck up a fun jam called “Who Put Da Pepper,” and for just a moment, the strings together created a sound strangely similar to a steel drum. Herman sang the words in a mock-Jamaican accent, and if I had been closing my eyes. I might not have known that I was standing on grassy hill in Northern Virginia.

Highlights from the set include “Woody Guthrie,” which was played in honor of Woody Guthrie’s belated birthday, along with a “Bolin Creek,” during which the band was joined by Hank Smith on banjo and Pattie Hopkins Kinlaw on fiddle. The jam blew the crowd away completely, and they begged for another tune with Hank and Pattie. Additional highlights include a “Black Peter>Y’all Come,” which features more wonderful, floaty fiddle playing by Pattie, along with a banjo solo by Hank.

Leftover Salmon left the stage momentarily following “Y’all Come,” but returned for a “White Freightliner Blues” encore with Hank, Pattie, and Danny Knicely in tow. All were pleased with the performance, including the band who thanked the roaring crowd and said, “Thank you so much B Chord! We’re Leftover Salmon, we’ll see you tomorrow night!”