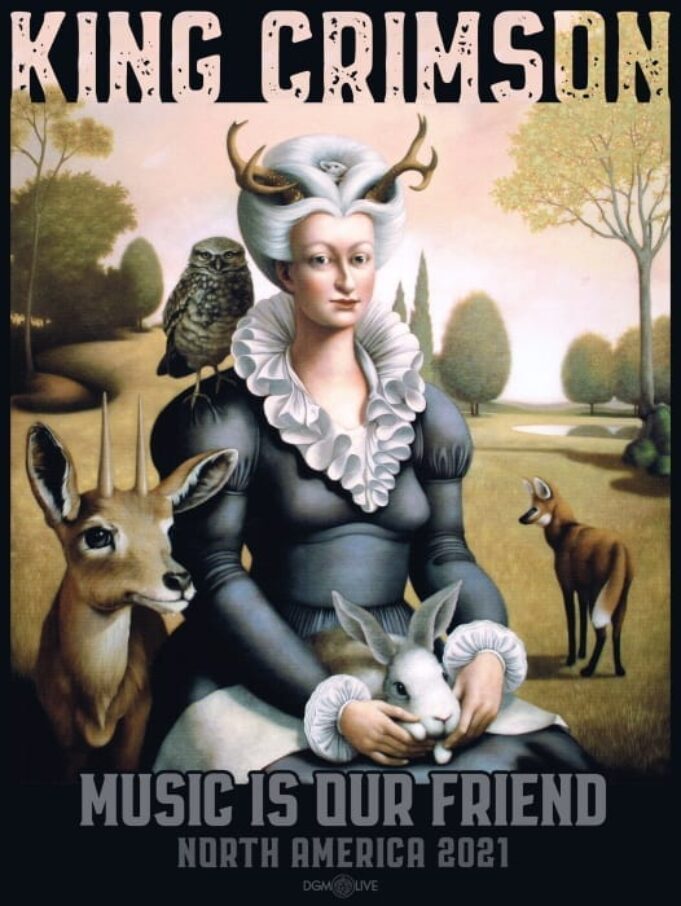 When King Crimson returns to action this July, it will be the seventh year that the band has toured since returning to performing live in 2014, a run only interrupted by the lockdown in 2020. In that time, the audience has been reinvented, as much as the band itself, something Robert Fripp noted after the band’s performance in Pompeii, Italy’s famous amphitheater:

“In Pompeii, a large percentage of the audience was young couples; KC moved into the mainstream in Italy. I walked onstage knowing that this band’s position in the world has changed level.” – Robert Fripp

The band’s shows regularly include material from twelve of their thirteen studio albums, including many songs from their seminal 1969 album In the Court of the Crimson King, described by Pete Townshend as an “uncanny masterpiece.” The 7-piece line-up play many historic pieces, which Crimson has never previously played live, as well as new arrangements of Crimson classics – “the music is new whenever it was written.” There are also new instrumentals and songs, as well as compositions by the three drummers, Pat Mastelotto, Gavin Harrison and Jeremy Stacey, which are a regular highlight. A unique show, where seven of the best musicians in the world play music without distraction or adornment.

“The Crimson Beast Is in Go! Mode. Totally excellent news! Much hooraying! Glad times are here!

The Crimson Beast Of Terror has woken from its enforced slumbering and is venturing out to stomp flat the psyches of innocents not yet experienced in the hammering onslaught of King Crimson’s uncompromising pounding – bish! bish! bish! – before turning on a beat to jellify hearts with gut-wrenching passion and soul-squeezing epic unfoldings to remind us that we are all mere subjects in the unfolding drama of the universe’s unfathomable mysteries while simultaneously rocking out and having a great time bopping about with Tony and Bobby and Gavin and Jakko and Mel and Pat and Jezza too.”

ROBERT FRIPP, though best known for his work in King Crimson, has contributed to numerous albums by players as diverse as Brian Eno, David Bowie, Peter Gabriel, Blondie, Talking Heads, Daryl Hall, The Roches, Peter Hammill, Keith Tippett, David Sylvian, The Orb, and The Grid. His 1979 solo album, Exposure was described as “the Sergeant Pepper of avant punk.” He has appeared twice in Rolling Stone magazine’s 100 Greatest Guitarist of All Time poll, although Fripp claims these are likely to have been mistakes by the typesetter.

TONY LEVIN has been a member of King Crimson since 1981. Internationally renowned and constantly in-demand for his distinctive bass work, he also tours with Peter Gabriel with whom he has worked since 1977. He has appeared on albums by Paul Simon, John Lennon, David Bowie and countless others and recently formed his own band, Stick Men alongside Crimson drummer, Pat Mastelotto.

JAKKO JAKSZYK was a member of Level 42, before working with Mel Collins as part of ex-KC alumni group, 21st Century Schizoid Band between 2002 – 2004. His solo album, “The Bruised Romantic Glee Club” (2006) was his first recorded collaboration with Fripp, followed by “A Scarcity of Miracles” in 2011. An acclaimed producer in his own right, Jakszyk has recently mixed Jethro Tull’s Ian Anderson’s UK Top 20 album, “Homo Erraticus.”

GAVIN HARRISON joined King Crimson in 2007, playing a series of dates in the USA the following year. A respected author and tutor, he has also recorded three albums with The Pineapple Thief, though Harrison is probably best-known for his work with Porcupine Tree. Modern Drummer magazine placed him in their Top 50 Drummers of All Time.

PAT MASTELOTTO joined King Crimson in 1994 after working with Robert Fripp and David Sylvian. A member of the hugely successful American 1980s group and MTV favorites, Mr. Mister, he is at home in both experimental music working with KTU as well as pop and rock appearing on albums by The Rembrandts, Hall and Oates and XTC.

JEREMY STACEY is a British drummer. His early work included the 1990s band, The Lemon Trees (with twin brother Paul Stacey on guitars, Guy Chambers and others) and Denzil. He has also played with Sheryl Crow, the Finn Brothers, Nick Harper, Noel Gallagher, and many more. On March 7, 2016, it was announced that he would be taking the place of Bill Rieflin as the center drummer on the 2016 King Crimson European tour, a position he retained even after Rieflin’s all too brief return to the band as a keyboard player.

As well as standard tickets, the band’s label, DGM, also has announced sale of VIP Royal Packages, limited to just 72 per show. The Royal Package gives priority seating at the front of the venue, early access, special merchandise, and personal insights and answers from David Singleton and one of the band members. These are on sale now from DGMLive.com. https://www.dgmlive.com/tours?liveshow=on.