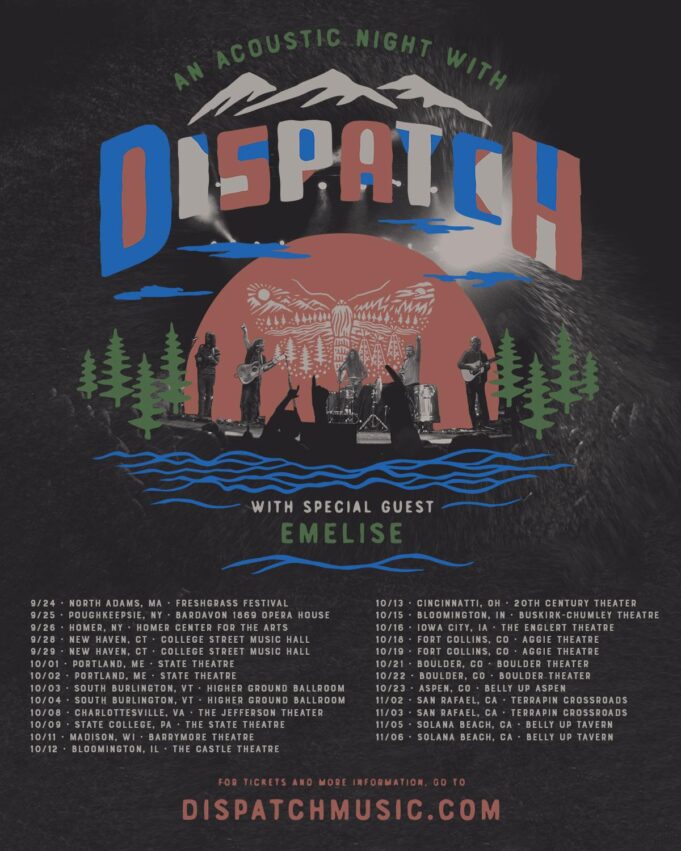 The excursion will kick off in Poughkeepsie, NY on September 25 and weave its way throughout the US until November, making stops in New Haven, Charlottesville, Cincinnati, Boulder, Aspen, Solana Beach and more (full routing below). Presale starts Monday, June 7 with code: BREAKOURFALL.

The songs on Break Our Fall speak not only to Chadwick Stokes’ and Brad Corrigan’s personal evolution, but to human nature itself, charting a course from denial and resistance to growth and acceptance through deep introspection and empathetic character studies. For Stokes and Corrigan, the only constant these past few years has been change: marriage, birth, death, departure. Add to that an exceedingly tense political climate, long-overdue reckonings on racial justice/gender equality, and a runaway global pandemic, and you’ve got Break Our Fall, an album that enriches Dispatch’s distinguished legacy, on which the depth and breadth of the band’s stunning songwriting is displayed in full force. The music is pure Dispatch – blending infectious roots rock with hints of reggae, folk, and blues. The production is similarly lean and energetic, leaving plenty of space for some of the group’s most pointed, political lyrics to date. Working with frequent collaborators Mike Sawitzke (Eels) and John Dragonetti (The Submarines) to craft a wide-ranging collection of cathartic songs, the result is a timely and essential album from a band still breaking new ground two-and-a-half decades into its storied career, an ode to resilience and survival that manages to find hope and joy on even the darkest of days.

Making sense of our often-incomprehensible world has been at the core of Dispatch’s mission since the very start, when Chadwick Stokes and Brad Corrigan were still just students at Middlebury College in Vermont. Over the course of a slew of acclaimed studio and live albums and countless tours and festivals, the band would go on to become one of biggest success stories in independent music history, selling out three nights at Madison Square Garden and drawing over 100,000 fans to a massive outdoor show in their adopted hometown of Boston without any traditional radio or major label support. Rolling Stone called the group “roots-rock heroes,” while Billboard praised their “seamless harmonies, ragged edges and breezy attitude,” and SPIN hailed the band’s “remarkable renaissance.” Throughout their rise, Stokes and Corrigan took every opportunity to use their success for good, launching charitable organizations to fight poverty and mass incarceration, raising funds and awareness for environmental causes on the road, and even traveling as far afield as Nicaragua and Zimbabwe to work with children and communities in need.