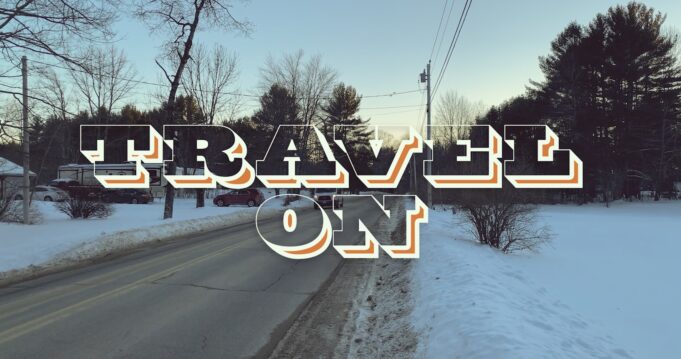 “Travel On” Is An Homage To The Muppets’ “Moving Right Along.” WEEKLY LIVESTREAM SERIES KICKS OFF TOMORROW ON MANDOLIN

Holler-folk trio The Ghost of Paul Revere have released the official music video for “Travel On”, the gritty, soul-rock anthem off their recent album Good At Losing Everything (2020). The video sees the Portland, ME natives and lifelong friends pay homage to Jim Henson’s The Muppets with a shot-by-shot recreation of the classic “Movin’ Right Along” from The Muppet Movie.

The ode to the world of Jim Henson kicks off with Griffin Sherry (vocals, guitar) at the wheel, appropriately dressed as Fozzie Bear, with Max Davis (vocals, banjo) as Kermit by his side. Behind them sits Sean McCarthy (vocals, bass) and permanent touring member Charles Gagne (drums). Sherry and Davis banter as their respective characters as they cruise through America in their beloved van. Their journey brings them to pick up former bandmember/frequent collaborator Ben Cosgrove, taking on the role of Big Bird.

“Travel On” is a departure from the band’s usual style, moving away from the folk/bluegrass realm into the harder rock space. However, not unlike many songs in the Ghost’s repertoire, this one also explores deeper themes of love, loss, and the struggles that life as a touring musician presents.

“It was inspired by a failed crosscountry romance and the constant, inescapable momentum of life as a touring musician,” explains Sherry, “where you’re always far away from where you want to be, even when you’re right there.”

The song also took on a life of its own, according to Sherry, who co-wrote the track with producer Spencer Albee. “In the beginning, ‘Travel On’ had much more of an acoustic Crosby, Stills, & Nash vibe to it,’ he explains. “As Spencer and I worked through it, and the band sunk its teeth into it, we began to see it as more ‘Sledgehammer’ and less ‘Marrakesh Express’. We kept hearing big Harrison-esque horn arrangements for it and it grew bigger and bigger as we played the songs as a band. What came out of that studio session is this raucous, over-the-top roots revival song that I love and resembles the sound of our big, sold-out hometown shows with all our friends on stage.”

Albee was involved in the song’s creation from its inception and worked closely with Sherry and the band through the whole process.

The Ghost of Paul Revere will celebrate the release of the whimsical music video tomorrow, 4/15 with the first of three weekly livestreams through the month of April, hosted on Mandolin. Single-show livestream tickets are available for $10, or buyers may purchase a 3-show package for $25. Patreon Fan Club subscribers get an additional 20% off bundle passes. Get tickets and more info here.