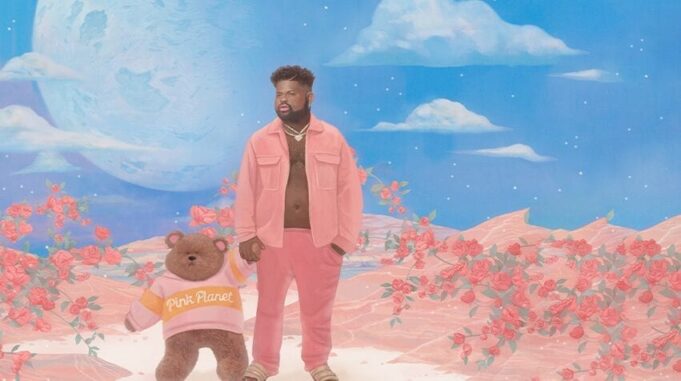 Artists Den has announced the sixth episode of their all-new digital series, Live From My Den, featuring Philadelphia-native singer, songwriter and producer Pink Sweat$, who is fresh off the release of his latest EP, The Prelude. The all-new digital series showcases today’s most extraordinary artists performing live from the creative spaces of their homes, studios and cities most meaningful to them.

To herald the announcement, Artists Den and Pink Sweat$ have shared an intimate live performance video of his song “At My Worst,” which was filmed in his LA home with his brother accompanying him on piano. Since his debut EP in 2018, Pink Sweat$ has made waves in the R&B scene, being hailed by Rolling Stone as “An Artist You Need to Know,” and ranked among Billboard’s “11 Hip-Hop & R&B Artists to Watch in 2019.” On his episode of Live From My Den, viewers will get an inside look at the inspiration behind his lyrical complexity, melodic power and vocal prowess. Live >From My Den is made possible and brought to life by Progressive; with additional support provided by Visa.
Live From My Den will feature a wide range of top artists and rising stars spanning an equally diverse array of musical genres, including Phantogram, Foster the People, The Head and The Heart, and many more. The series kicked off on October 16th with 8x Latin GRAMMY® Award 1x GRAMMY® Award nominated superstar Sebastián Yatra and was followed by GRAMMY® Award-nominee, soul singer, producer and activist Aloe Blacc and electro-indie superstars Glass Animals.

Along with spectacular live performances, each artist will answer fan questions drawn from the artist and partner communities as well as offering private tours of their creative spaces including their homes, recording studios, instruments and locations tied to favorite songs. With its intimate setting and inspiring approach, Live From The Den gives fans a truly unique hi-fidelity experience with a caliber of storytelling that has made Artists Den a global hallmark for more than a decade.

Furthermore, each episode of Live From My Den will highlight a local charity organization important to the artist, to be promoted via donation links and targeted messaging. In this unprecedented time of need, Artists Den and its partners will give back to the community by working alongside Delivering Good, a non-profit charity partner uniting retailers, manufacturers, foundations and individuals to support people affected by poverty and tragedy. For more information, or to make a donation, please visit www.delivering-good.org.

Nicknamed after the attire he became known for wearing in recording studios, Pink Sweat$ is a singer and songwriter who favors R&B ballads consisting of only his voice and guitar. After writing material for other artists, he made his recorded debut in 2018 and has released projects like 2020’s The Prelude with the intent of creating a lasting emotional connection with listeners.

A native of Philadelphia, David Bowden was musically inclined as a youngster. He learned to play drums and sang regularly. Raised in a religious household, he didn’t get into secular music until his late teenage years, and eventually absorbed a wide breadth of genres. He got into the music industry as a demo vocalist and songwriter at Philly’s historic Sigma Sound Studios. With no desire to become a recording artist himself, Bowden co-wrote material for the likes of Rosie Bondz, Natalie Imani, (including the 2016 single “Guns and Roses”), and (such as the 2017 single “Child Please” and 2018’s “Pretty Ugly”).

After surviving a severely debilitating three-year fight with a rare esophageal disorder, Bowden felt inspired to start keeping his songs to himself, and signed a digital distribution deal with . He made his recorded debut as Pink Sweat$ in July 2018 with “Honesty” and “No Replacing You,” a pair of heartfelt, unvarnished ballads that sharply contrasted with commercial R&B. Both songs appeared that November on Volume 1, his first EP. The similarly direct and brief Volume 2 arrived the following March. A steady stream of singles appeared over the next two years including the 2020 ballad “17” and the bouncy “Ride with Me.” While he was issuing these singles and shorter projects, work was being done towards the release of his official debut studio album, Pink Planet. To satiate fans waiting for the LP’s release, Pink Sweat$ offered up The Prelude in July 2020. A collection of select songs from the still-forming album, the EP was preceded by the pleading, passionate single “Not Alright” the previous month. ~ Andy Kellman, Rovi