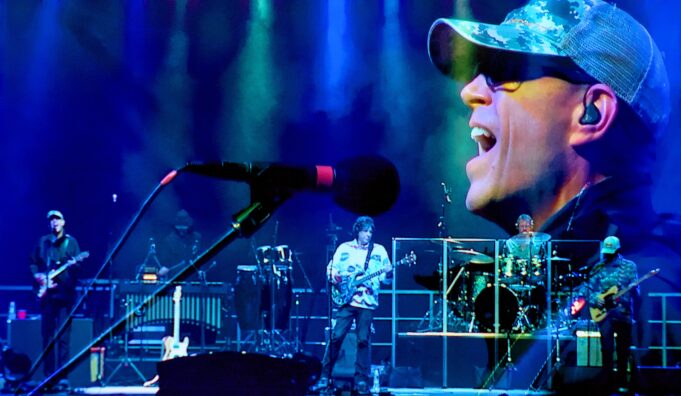 As our unusual 2020 fall season rolls on, many bands have been getting in the shows while they can, to the grateful relief of their loyal fanbases. One such band is jam scene staple moe., who returned this past weekend with a brief run of live performances in the northeast. Their first live audience show in months kicked off last Thursday at Cheshire Fairgrounds in Swanzey, New Hampshire. LMNR caught the band the following nights, on Friday and Saturday October 23 and 24, a stellar two show run at Yarmouth Drive-In at Cape Cod, Massachusetts.

Yarmouth is one praiseworthy example of this new strange music experience done right. From the professional yet friendly staff involved to the layout, to the place’s overall vibe, this Cape Cod drive-in delivers one the best substitutes for the usual rock theatre show one could ask for. Consequently, the kind of energy that fuels such indoor experiences that we’re missing was present through Yarmouth’s grounds, with fans dazzling up their spaces visually and audibly and soaking in this rare appearance from their favorite dad rockers in full gratitude.

Its little surprise, then, given the time away and the great setting, that moe. was in fine form and performed a number of splendid sets of music across the weekend. The first set of the Yarmouth two-night run really started kicking into gear with the performance of the zany rock tune “Skrunk,” which was highlighted by a beautifully drawn out, steady segue jam into “Time Ed.” This musical energy carried over into the set two opener, which was a fiery performance of the creative modern rock tune “Along For The Ride,” a favorite of the fanbase that comes off the band’s new 2020 album, This is Not, We Are.

Other moments of the first night brought in similarly locked-in, improvisational transitions, such as the really psychedelic yet fast-paced performance of “Puebla,” complete with stellar bass work from Rob Derhak, that eventually molted into “Bearsong.” This latter jam, which concluded this first night at Yarmouth before the encore, was the chance for band member Al Schnier to show everybody present how gritty guitar solos are done.

Night number two at The Yarmouth Drive-In busted wide open with a high-riding, spirited go at their most treasured tune, “Rebubula.” You’ll seldom if ever hear complaints from fans about moe. cranking this one out, especially as a show opener. This second show of the run also kept up moe.’s execution of confidently, comfortably executed segue improvisation. The prime evidence of this was clearly set two’s big musical sandwich of one of their most treasured old school songs, “Moth.” The first go around opening the set had the band coasting through a more subdued stretch of funk, with guitarist Al employing some trippy mechanical guitar pedals.

The tune eventually ramped up with energy and enthusiasm into one of their newer compostions, “LL3.” Like a few others of the weekend, LL3 features some choice mallet work from band percussionist Jim Loughlin. For many, however, the gem of the night was the rare, and solidly played, surprise version of The Who’s “Pinball Wizard” that came near the end of this big second set. moe. treated the classic rock anthem with their of punch, and rocked it into a “Moth” reprise that had fans reeling throughout Yarmouth.

moe. finished out the weekend at South Farms in Morris, CT, another recent hotspot for popular musical activity. The band continues the weekend after next with a performance on Saturday October 7 at The Drive-In at Frederick, Maryland.

For information about upcoming events head to the venue’s website here: https://yarmouthdrivein.com/