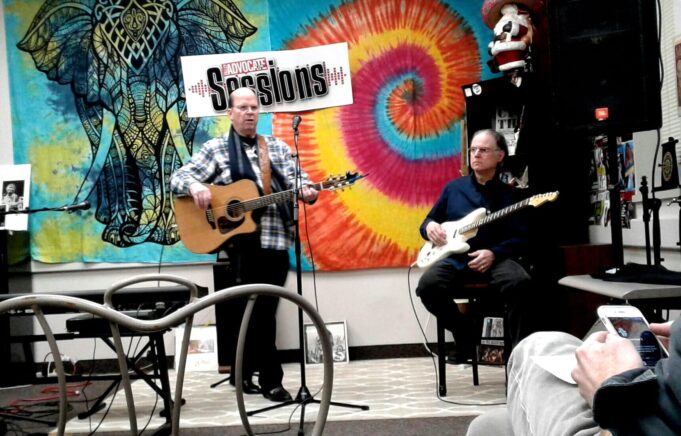 I just had the… hm, ‘pleasure’ might sound mundane, but there’s no better word to sum up the combination of an enjoyable experience, an intimate setting with just a few people, and an internal sense of gracious perspective with unintimidating awe.

I just had the substantial pleasure of ‘sitting in,’ by particular invite, on Peter J Newland’s Advocate Session with Mark Pappas. A mere dozen of us seated ourselves in a back room of the local news publication’s headquarters, a long room with an office set-up at one end and something of a video recording studio semi-permanently installed in the other half or so.

As one of so few, and these including Sessions personnel, seated just a few feet from the Valley veteran and his right-hand man, I settled comfortably into my role as Observer Only. Certainly not here to participate, other than the perfectly appropriate role of attendee or member of just enough others to call an ‘audience,’ I frittered away a few minutes of prep-time playing with the device in my hands. I snapped a couple of quick pics before things got going and while enjoying the tune-up.

In the still of a quiet moment or two, sweet bits and snippets of different songs emanted from the pretty white Stratocaster in the hands of the unassuming and versatile Mark Pappas. An hour or so of such beautiful musings would not be a bad thing at all to have playing in the background while puttering around the house in the afternoon of a lovely, lazy day. A the DAT recorder would be so nice right about now.

These mini-concerts are pleasant and short affairs, accompanied as they are by equal interview time. A couple of Pete’s many stories, concisely conyeyed in an especially low-key, self-effacing manner, were interspered among the four songs in the set. The fourth and final number was a piano composition, with vocals and sparse guitar, after which the big guy remained seated behind his keyboard for the informal Q&A/ chat session.

With the trio of tunes that first issued forth, it was like a “Peter J Playlist,” with Newland’s contenders for greatest hits or personal favorites with a couple drawn from his Nashville “Nomad” solo album:

It is really quite interesting to experience these songs, that voice, and Mark’s Strat in this context. Pete’s six-string sounds especially ‘sparkly’ as well. “Digging for Salt” and “Nothing Left” are both driving numbers, rather on the rockier side of MOR or middle-of-the-road, but they seem especially engaging as straight-up folk songs, here without a full band. Pete’s voice is exactly right for this delivery, with strong singing straight out front. His acoustic guitar comes out crystal clear, with no mix to get lost in, and Mark’s contribution is the perfect model for attributes like these- appropriate accompaniment, complementary embellishment, and totally tasetful in particular. Guitar learners take note: this is exactly how it’s done in the essential supporting role of irreplaceble right-hand man.

“Nothing Left to Burn” is where these points are really brought home. For one thing, give it a listen and try to deny that it should be a radio song, and a popular one if not a huge hit. Then listen with an ear for comparison to the full-band, Radio-X execution of that same song. If it weren’t for the commonalities in tone and technique, it might almost sound like two different players. In the one case, the guitar is fully-frontal lead guitar; in the other, as here, the playing is (naturally enough) toned-down and does more to complete the song rather than top it off- something like steel guitar with a folk song: not the point and not the focus, but the running representation of real composition, fleshing out the song in ways that couldn’t be done without it. The quality of tastiness pertains either way… of course.
“Waiting for a Train” is a ballad. Perhaps best heard in this stripped-down context, the listener is presented a portrayal of a real man and his life story, in terms both poetic and concrete. The story contains an element of peculiar familiarity, almost a particular universality (if that’s possible) in the way it brings to the listener’s mind all those other songs in a genre that may or may not have been written and heard.

Weaving a trail of tradition from Woody Guthrie’s train songs, through Bob Dylan’s personality portrayals and Tom Waits’ is-it-real-or-is-he-crazy tales, and taking its time to tell the story, low-key like Leonard Cohen (tho less low lol), the poignant tune and lyric make for a catch in the throat, and maybe a tear in the eye too, and it elicits this emotional response right from the first hearing, before the words and the story have a chance to sift and settle in the mind. Afterward, the feel and the impression linger so the listener looks forward to the next time- one wants to get the story straight, and most modern men and women will be willing and able to sit with the emotional experience as well. It is a touching tune, to say the least.

The interviewer asked about FAT, of course, and Pete had mentioned the area’s premier rock legends earlier. What comes across as the biggest similarity between all of his musical entities is clarity. The voice gets clearer as it ages, the sound is ever more clear as technolgy advances and equipment improves, and the co-existing  personalities of Newland the man become more clearly delineated. The Rock-&-Roll Band front-man, the MOR folk-rocker, and the sometimes soul singer come together with the stand-up singer-songwriter so that each is both identifiable in itself and integrated into the whole.

Elder Statesperson is the other component of the local/regional Superstar’s overall identity. This is a fellow who has the range of experience to kick around some big-picture concepts; the mission of the music is accordingly clarified a couple of times. In general, it’s a Community thing, bringing people together. For Pete in particular, the real acheivement to reach for is the establishment of Professional Musician as a viable career. Re-establishing the thriving local music scene of earlier decades, back in the area’s and the Advocate’s alt-era glory days, so that surviving will be at least feasible, is an endeavor already in the works. Once this mission is accomplished, the greater vision can have a starting point. Forward movement can then (finally) be made toward progress beyond the old model.

And in the future? What happens in the Valley… can spread beyond the Valley.

If Peter J Newland gets his way, the local area may well carry the surrounding region into a new era of importance and relevance,  becoming an ongoing, open, expanding Music Community able to offer a fully functioning and feasible path for both culture and career. Pete called it an “eco-system,” in which economics and ecology, both as business practice and being integrated with the environment, social-specifically, will work together in what,  one supposes, would become a self-supporting, self-sustaining system able to operate within, with, and for the benefit of, the overarching human system.

Drop us a line at [email protected] with your live music show review or news story.