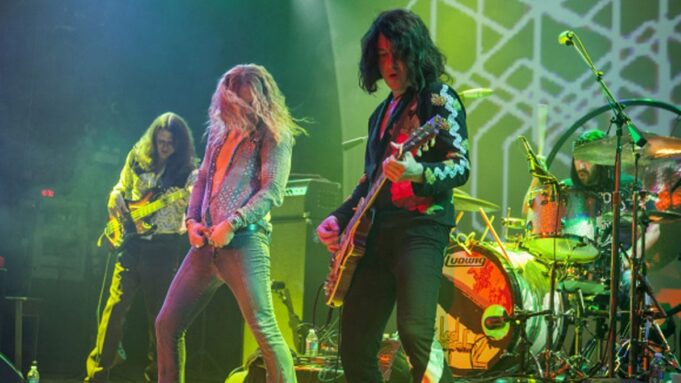 LED ZEPPELIN 2 ain’t your daddy’s tribute band. LED ZEPPELIN 2 brings the intensity of a Led Zeppelin show by re-enacting the live improvisation & onstage interaction that earned band their legendary performing status. Throughout 2019, LED ZEPPELIN 2 celebrated the 50th anniversary of Led Zeppelin II, performing throughout North America in clubs and theaters, capped off with a 2 night stand at the Psycho Las Vegas Festival, where Mikael Akerfelt of Opeth shouted them out from the stage, saying “I’ve been here for 24 Hours and I’ve seen 2 bands … The Misfits and LED ZEPPELIN 2. And LED ZEPPELIN 2 was fantastic” In 2020, they launch a winter tour that kicks off their celebration of the 50th anniversary of Led Zeppelin III, where fans can expect them to play the entire album along with other favorites and deep cuts. The tour kicks off a year-long bout of touring for the band.

These four Chicago natives bring their astounding musicianship and love of Zep together, and the response has been incredible, with big tours and sold out crowds around the country. Instead of tired sets that never change, they play a new set every night, leading to a spontaneous vibe both onstage and off.

In concert, LZ2 delivers authentic renditions of classic Zeppelin material, as well as recreating the live improvisation & onstage dynamics that earned Led Zeppelin their legendary status for performing. The band formed in 2008 and almost immediately packed clubs with fans hungry for the experience, touring the US in 2011. Their national tour co-headlining with Australian Pink Floyd hit the road in 2015 in amphitheaters, large hall and hockey arenas. They have domestic dates as well as shows in Israel and South American coming up, as well as Canada and the east coast dates announcing soon. The band is comprised of some of Chicago’s most celebrated musicians, Bruce Lamott (Yakuza, Bloodiest), Greg Fundis (Old Shoe), Matthew Longbons (Ghettobillies) and Paul Kamp (Busker Soundcheck).

LED ZEPPELIN 2 brings forward the Led Zeppelin experience to a new generation while satisfying diehard Zep fans with a raw, fresh approach. Renowned music critic Jim Derogatis wrote this for the Chicago Sun Times: “… they do as good a Zep as Zep ever did back in the day.”