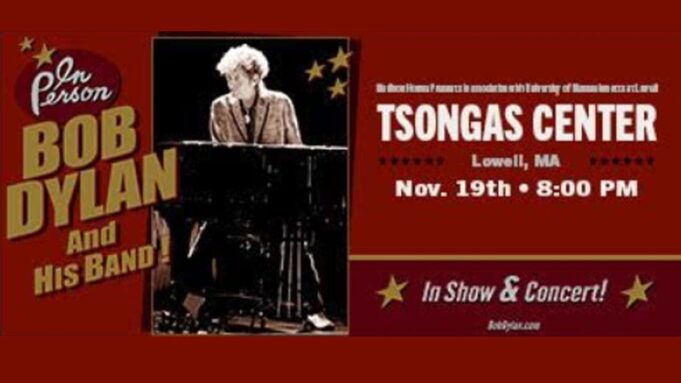 The Never Ending Tour at the Tsongas Center in Lowell, MA November 19, 2019 by Michael Lasalandra

Bob Dylan brought his Never Ending Tour to the Tsongas Center in Lowell Nov. 19 where he and his veteran band blew through 19 songs covering varied parts of his storied career in a performance that left the nearly sold-out crowd standing and cheering.

Dylan has always had a soft spot for Lowell, probably because it is the birthplace of beat writer Jack Kerouac. Lowell was the second stop on Dylan’s legendary Rolling Thunder Review tour in 1975 and a documentary about the tour released this year documented a stop at Kerouac’s grave by Dylan and poet Allen Ginsberg. He often has included Lowell as a stop on his tours of the northeast in recent decades.

He was greeted with a thunderous ovation when he took the stage this night wearing a white dinner jacket and black slacks and slinging an electric guitar over his shoulder as he and the band broke into “Things Have Changed,” a song written for the 2000 movie Wonder Boys.

“People are crazy and times are strange
I’m locked in tight, I’m out of range
I used to care, but things have changed.”

He then moved on to upright piano to do “It Ain’t Me Babe” from 1964’s Another Side of Bob Dylan, followed by “Highway 61 Revisited” from his 1965 album Highway 61 Revisited. All three were performed close to how they were arranged on those albums. That in and of itself is unusual, as Dylan most often takes his classic songs and turns them on their ear, changing melody, time, and vocal phrasings so that the songs are often unrecognizable for several bars, sometimes longer.

Some fans don’t like him changing the songs they love so radically, but I like it. The changes keep him — and me — interested. It prevents his shows from becoming oldies concerts. He only picked up his guitar a few times during the show, preferring to sit at the piano, pick up his harmonica a few times and, often, just perch without his guitar at the microphone stand, a la Frank Sinatra. He smiled often and used a number of hand gestures more associated with singers like Sinatra or Tony Bennett. From time to time he shuffled back and forth while holding the mic in his hand.

Now, to his singing. Some fans have never really liked his voice and, in recent years, have come to hate it, as it has often sounded like a hoarse frog. Me, I have always loved his singing, and consider him one of the greatest vocalists of all time (Rolling Stone ranked him Number 7).

Over the years, however, his voice has deteriorated greatly and there have been some shows where he was difficult to listen to.

That was not the case on this night. Dylan’s voice was in top form, clear and strong and it was fairly easy to understand the words, though, to be fair, I probably. knew the words to most of the songs by heart. I’ve seen Dylan maybe 30 times. There have been a few clunker shows, most were very good and some were excellent. This night’s performance fell somewhere between very good and excellent.

Dylan normally doesn’t say a word during a show, though on this night he did introduce his band which included long-time guitar player Charlie Sexton and bassist Tony Garnier. His band, which also included Donnie Herron on violin and pedal steel guitar, Matt Chamberlain on drums and Bill Britt on second guitar, is one of the tightest units on the planet. He did songs from many albums, from “Not Dark Yet” from 1997’s Time Out of Mind to “Gotta Serve Somebody” from his 1979 Christian album Slow Train Coming and more. Songs ranged from angry upbeat rockers to sweet ballads.

Since Dylan has released 38 studio albums since 1962’s Bob Dylan so he has literally hundreds of songs in his repertoire. Inevitably, some fans are going to be disappointed. For example, he did not perform some of his most famous songs such as “Times They Are A’ Changing” from the 1964 album of the same name, “Just Like a Woman” from 1966’s Blonde on Blonde or “Like A Rolling Stone,” from the Highway 61 album. To include everything would be impossible. Maybe next time. Set lists change often.

In all, the show lasted about an hour and 45 minutes and included a two-song encore, including “Ballad of a Thin Man” from Highway 61 Revisited and “It Takes A Lot to Laugh, It Takes a Train to Cry.”

Fans, who ranged in age from their teens to their 70s, groaned loudly when the lights came up, signaling the show was over.

God willing, he will be back to Lowell before too long. The set list will certainly be different then. And it will likely be just as interesting.

Michael Lasalandra Is a music fan and an artist who paints portraits of musicians, among other subjects. His work can be seen at www.mlasalandra.com.