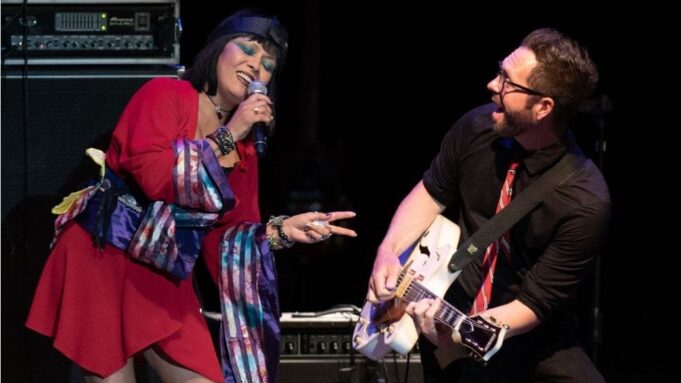 Lost 80s Live! more than lived up to its “lost” moniker when it took place on a balmy September night at Los Angeles’ Greek Theatre. Several bands from the decade took to the stage to play a few songs they were known for in the era, or if they were one hit wonders, played a song no one knew followed by their classic. The audience of middle-aged Material Girls and Wild Boys dressed in neon track suits lapped up every minute of the night. Here’s the list of the good, the bad and the shockingly nondescript:

Dramarama: With its original members intact, Dramarama is as hard driving and passionate as it’s ever been, and its songs are guaranteed to keep you on your feet. Good to see the band going strong—Dramarama was the highlight of the night.

Setlist:
Work for Food
Haven’t Got a Clue
ScenarioLast Cigarette
Anything, Anything (I’ll Give You)

Real Life: Real Life is down to one original member in David Sterry, but his voice was so on point that I thought he was lip syncing through “Send Me An Angel.” He wasn’t.

Setlist:
Catch Me I’m Falling
Send Me an Angel

The Vapors: This bucket list band finally made to the west coast of the US! Slower and older (just like the rest of us), they churned out a decent power pop set, ending with their all time classic “Turning Japanese.” It would be good to see them do a full set in a proper venue.  (Hint, hint.)

Farrington + Mann the Original Members Of When In Rome UK: It’s always good to hear “The Promise,” and this extended version had the crowd on its collective feet, and there was even a KEYTAR SOLO. If there was an award handed out for being the most quintessentially 80s band on the bill, Farrington + Mann would have taken it home.

Bow Wow Wow: Annabella Lwin and her guitar player performed a lackluster set to a backing track. WHERE WAS HER BAND? Bow Wow Wow’s songs have a driving beat and seeing them performed with a live rhythm section would have greatly enhanced her performance, which felt awkward at best.

Setlist:
Baby, Oh No!
Do You Wanna Hold Me?
I Want Candy

Wang Chung: Wang Chung performed their songs dutifully and were certainly crowd pleasers, but it wasn’t Wang Chung. Where was singer Jack Hues? Special points to the band for changing the lyrics to The Clash’s “Should I Stay Or Should I Go” to “Should I Wang or should I Chung?” (Answer: I really don’t know.)

Setlist:
To Live and Die in L.A.
Dance Hall Days
Should I Stay or Should I Go
Everybody Have Fun Tonight

Boys Don’t Cry: Boys Don’t Cry opened show, but things immediately got weird when singer Nick Richards announced he had to pee after the first song. And so he did (offstage, thankfully) as confused group of musicians waited for him to return. When he did, he came out in a serape to perform the band’s hit, “I Wanna Be A Cowboy.”

The Setlist:
Young Men Drive Sports Cars
I Wanna Be A Cowboy

The Tubes featuring Fee Waybill: I love The Tubes, but this set was definitely focused on their ’80s catalog, which isn’t as rich as anything they put out the decade before. Obviously, as this was a ‘80s show, we wouldn’t be hearing “White Punks On Dope,” but one can always hope. See them headline their own bill if you can.

Setlist:
She’s a Beauty
Don’t Want to Wait Anymore
Talk to Ya Later

The Escape Club:
The Escape Club sounds very much like they did back in the day. No surprises on either side of the spectrum here, and their extended version of “Wild, Wild West” struck a chord with the audience.

Missing Persons: Dale Bozzio and band (including Prescott Niles formerly of The Knack) ran through a short, sweet, fun set of the bands hits.

A Flock Of Seagulls: There’s one original Seagull left in the Flock. Mike Score led the rest of his band through an energetic set of songs we know and love to close the night.

Setlist:
The More You Live, the More You Love
Space Age Love Song
Wishing (If I Had a Photograph of You)
I Ran

Also on hand, of course, was host KROQ’s Richard Blade to remind us, once again, that the ‘80s should never be forgotten.