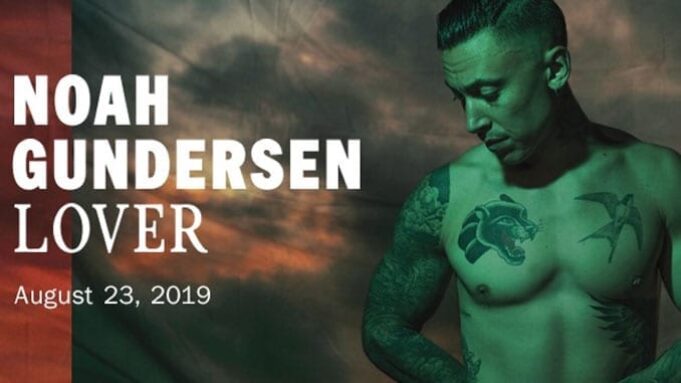 Acclaimed musician, Noah Gundersen, has announced the release of his sensual video for “Lover,” available for viewing today on YouTube. The video had been available exclusively on Apple Music since last Friday. “Lover” is the title track from Gundersen’s fourth album, which arrives August 23rd via Cooking Vinyl.

For Gundersen, the song is deeply personal. “I’ve never really cried to my own songs like I have with this one. Somehow I’m able to see myself so clearly in it. Andy [collaborator Andy Park] and I wrote and recorded most of it in one night, early on in the process of making the record. The second verse just came out as an ad-lib and we never changed it. Sometimes you tell yourself something over and over, just hoping that it will eventually come true, trying to fill an unspeakable void.”

The Seattle-based Gundersen recently released the emotionally charged song and video, “Robin Williams,” which Consequence Of Sound wrote “might make you cry, too. Evoking the memory of the beloved comedian, Gundersen wrestles with the finality of life.”

Recorded over two years at Seattle’s The Crumb studio with longtime collaborator, producer/engineer Andy D. Park (Death Cab For Cutie, K. Flay, Pedro The Lion), LOVER sees Gundersen continuing to veer towards an increasingly intimate and intense creative approach, wedding intricate beats and warm, natural instrumentation to a series of stark, almost dreamlike, new songs. Rich with patience and grace, songs like “Older” and “Out of Time” reveal a remarkably gifted songwriter-artist in the midst of confrontation with life’s toughest truths, somehow emerging with even greater self-awareness and understanding.

“This record is deeply personal,” says Gundersen, who recently turned thirty. “It’s about love, it’s about failure, it’s about drugs, it’s about sex, it’s about age, it’s about regret, it’s about itself (very meta, I know) and it’s about finding peace. I think it’s the most I’ve ever put of myself into something. It’s been cathartic. I’ve cried a lot.”

Widely hailed as a powerful and compelling live performer, Gundersen will herald LOVER with a wide-ranging North American headline tour. The dates get underway September 19 at Bellingham, WA’s Wild Buffalo and then travel through a hometown finale set for November 16 at Seattle’s famed Showbox.

Born to a devoutly religious family in Olympia, WA, Noah Gundersen has been writing and recording music since he was but 13, working his way from teenage hardcore and indie rock to the creation of his own distinctive strain of bold, genre-busting songcraft. A series of solo EPs – including 2011’s breakthrough FAMILY – eventually led to 2014’s self-produced full-length debut, LEDGES, hailed by The Austin Chronicle for its “broken, penitent ballads that suddenly burst with a shock of power and catharsis…Gundersen’s songwriting brings an authenticity of fears, want, and religious weight. “CARRY THE GHOST arrived the following year, earning further acclaim from the likes of NPR, which noted, “Noah Gundersen’s new album is a slow burn, but his imaginative lyrics and soul-baring melodies are engaging. His music pulls you in whether he’s searching for God or for love, or just for how to be a man. With his evocative singing as the centerpiece and very minimal accompaniment, his songs are as intimate as a confessional.”

Ever searching, Gundersen impelled his music towards new terrain on 2017’s WHITE NOISE, melding his increasingly potent lyrical motifs with complex electronics and startling levels of sonic intensity. The album reaped a whirlwind of critical acclaim upon its 2017 release, with Oregon Public Broadcasting’s opbmusic.org hailing it as “an incredibly dynamic and well-crafted release – one of the year’s best, in fact.”

“(Gundersen’s) growth as a songwriter can be heard throughout all corners of White Noise,” wrote Consequence of Sound. “The Seattle native has evolved to become an even more striking musician, his lyrics not only burning brighter, but his arrangements fuller and more intense to match their maker.”

“All in all, where (Gundersen) might have let his heart out for the world to see on previous records,” wrote Pop Matters, “he’s never done it so simultaneously smartly and recklessly as he does on WHITE NOISE… For those fans willing to try something new with their main guy, they’ll probably find an anthemic, even cerebral rock-out experience that they will feel all the more refreshing.”

“It’s foolish to think a guy who hasn’t reached his 30th birthday has peaked,” raved the Seattle Times, “but White Noise represents the high watermark for Gundersen’s career so far and is one of the best albums of 2017…. It is a defiant, 68-minute hit of the good stuff off the top shelf, and it announces Gundersen as a potent artist coming into his own.”

Along with his recorded canon, Gundersen – who also maintains membership in Seattle indie rock heroes Young In The City and the all-star Americana collective known as Glorietta – has spent much of his adult life on the road, performing as headline act and support to like-minded artists spanning Emmylou Harris, Beck, City & Colour, and Josh Ritter.