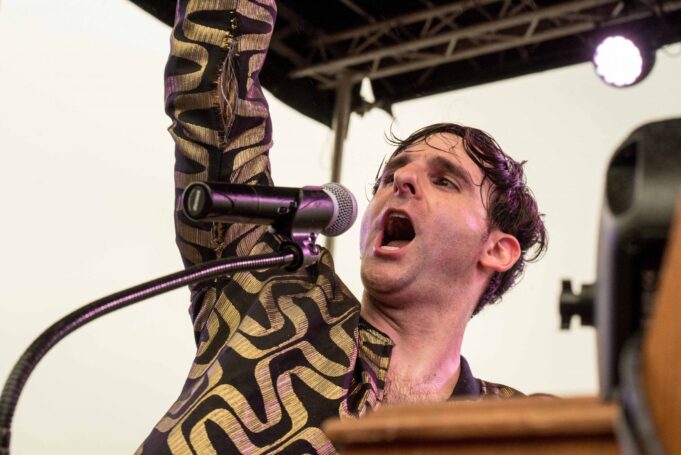 Low Cut Connie rocked Wagner Park in Battery Park City on a rainy July night.  Adam Weiner, the lead singer and keyboard maestro, ran from one end of the stage to the other throughout the performance.  He went into the crowd, singing and hugging the audience all the while having a great time doing it. The show was a high-energy, ninety-minute tutorial on how to rock.

The contagious joy of a Low Cut Connie show starts onstage and quickly spreads throughout the entire venue. The rootsy, soulful sounds explode into high-octane, red-blooded, American rock-and-roll driven by the pounding piano (dubbed “Shondra”) by Adam Weiner. The band’s performance included songs from five studio albums including their latest release Dirty Pictures (Part 2), which Rolling Stone has described as “a stand-alone triumph of missionary zeal.” The band peppered in choice covers by Prince and Harry Nilsson throughout their set as well as their own rocking tunes.

Low Cut Connie began in 2010 in Philadelphia. The current lineup is Weiner, Will Donnelly, and Ehssan Karimi. They’ve been on the national festival circuit this season, with an appearance at the Green River Festival in western Massachusetts as well as upcoming performances at the XpoNential Fest in Camden, NJ and Telluride Blues and Brews Fest in Telluride, CO.

Wagner Park has been host to a number of free public concerts throughout the 2019 summer and will continue through August. A wonderful mix of open lawns and intensively planted gardens, threaded through with paths and walkways, Wagner Park is a place to explore. The Park Pavilions contain a restaurant, and its public roof deck affords breathtaking views of the Statue of Liberty and New York Harbor. Programs such as preschool play and adult art are offered here as well as Sunset Singing Circles, Sunset Jam drumming circles and the River & Blues concert series. This is a wonderful place to picnic, read a book, paint a picture, photograph flowers and watch the boats go by.

Check out this clip of a recent performance at the Green River festival in MA.

Oh, hey- use that nifty search button up in the upper right corner to search this site for great content- search by artist or genre, you’d be surprised what you might find.