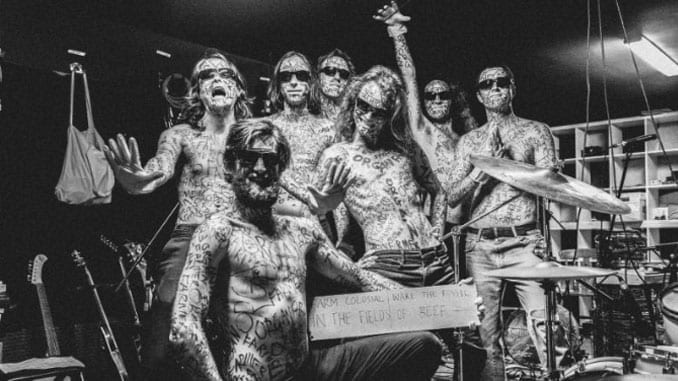 Australia’s King Gizzard & The Lizard Wizard are soon to embark on a massive headline world tour, just before releasing their fifteenth studio album — the thrash metal-worshipping Infest The Rats’ Nest — on August 16 (ATO Records). The septet will first take on North America, beginning at The Greek Theatre in Los Angeles, CA on August 13, before moving through much of the U.S. and Canada and eventually storming through Europe this October. See below for the full list of currently-announced tour dates.

The release of Infest The Rats’ Nest has so far been preceded by three singles — the wildly heavy “Planet B,” the chugging “Self-Immolate,” and the blastbeat-laden “Organ Farmer” — and their absurdly dark accompanying videos. These new tracks prove that King Gizzard & The Lizard Wizard aren’t mere dabbling dilettantes when it comes to thrash and metal. Their love of this ferocious music runs deep, and was previously explored on 2017’s apocalyptic concept album Murder Of The Universe, hinted at during the award-winning Nonagon Infinity’s more bludgeoning moments and elsewhere in numerous hardcore psychedelic freak-outs in their back catalogue.

In a display of their defiant creative restlessness, the prolific group released the decidedly mellower Fishing For Fishies (ATO) earlier this year, which featured the stomping electro-shuffle “Cyboogie” and the playful title track.

The planet is in trouble. Dire trouble. But fear not: Melbourne, Australia seven-piece King Gizzard & The Lizard Wizard have returned to save us all, this time armed only with blast beats, an arsenal of well-oiled guitars that are locked and loaded, and a desire to melt faces clean off.

Their fifteenth studio album, Infest The Rats’ Nest is by far The Gizz’s hardest and heaviest album to date. How metal is it? Very Metal. Maybe even more.

Released just six months after the uplifting blues-rock boogie and deep electro explorations of Fishing For Fishes, and drawing on the mid/late 1980s golden period of thrash metal – Metallica and Slayer, certainly, but also lesser-cited bands such as Exodus, Kreator and Overkill – Infest The Rats’ Nest sees a wholly unexpected creative detour into new sonic terrain.

“In fourth grade there was an older kid who was into Rammstein,” explains Stu of his early discovery of metal’s extremities. “I made friends with him and we put together a performance at our school assembly where we headbanged to ‘Du Hast’. I got whiplash, which I thought was pretty cool. That was my introduction to heavy metal, and soon Rammstein led to Metallica, Metallica led to Slayer, Slayer led to Kreator and Sodom. The German bands really kicked my ass and scared the hell out of me too. Later on, when I picked up a guitar I realized that shit was too hard to play, so I got into rock ‘n’ roll and garage. That was liberating.”

Infest The Rats’ Nest is the sound of King Gizzard & The Lizard Wizard scratching the thrash metal itch, fully and unequivocally. Ferocious and direct, “Organ Farmer” is built on drums that gallop away like a battalion of wild horses over the horizon and a triple guitar attack set to stun. It’s the type of sub-three minute song you wish Hetfield and co. still made. ‘Venusian 1’ goes at it even harder, a shredding collection featuring an army of guitars. A guitarmy, if you will. This is an album dripping with disdain and disgust for a planet consuming itself in a mass act of cannibalism. ‘Superbug’ sings of the type of lurgy that will one day destroy us all, while the utterly nihilistic ‘Self-Immolate’ sees riff piled upon riff and Stu Mackenzie delivering a vocal display to stand alongside the likes of Tom Araya or Max Cavalera. “I’m a pretty shit singer but I do think of my voice as an instrument,” laughs the frontman. “You’ve got lots of tones and different sounds in there you can experiment with.”

Elsewhere, recent single “Planet B” is a frantic, bludgeoning beast of a song, a scorched earth blitzkrieg that depicts a world burning through its natural resources (“Open your eyes and light the fluid / Get into a petrol siphon / Low on meals, browning fields / Bury children…”) and charging headlong into a population exodus that may only be solvable through the colonization of other planets. Breakneck closer ‘Hell’ meanwhile is the last black bile-spewing word on musical brutality. King Gizzard meet the fears and anxieties of a planet head on; here is a place where uncompromising music meets the concerns of contemporary cli-fi (climate fiction), that emerging movement of writing centered around ecological disaster and its repercussions.

“The A-side of the album is set in the near future and is about real shit going on right now – especially ecological disaster,” explains Stu of the album’s grand themes. “We’ve got a lot of things to fear. The B-side tells the story of a group of rebels who are forced to leave Planet Earth and try to settle on Venus. I spend a lot of time thinking about the future of humanity and the future of Planet Earth. Naturally these thoughts seep into the lyrics.”

After a punishing release and touring schedule of 2017-18, Infest The Rats’ Nest was recorded by a pared-down King Gizzard line-up. The band have always enjoyed a fluid approach to writing and recording and with guitarist Cook Craig and keyboardist/harmonica player Ambrose Kenny-Smith touring with their other band The Murlocs, bassist Lucas Skinner enjoying first-time fatherhood and drummer Eric Moore running the band’s own label Flightless (other bands they have released include Thee Oh Sees, Amyl And The Sniffers and Tropical Fuck Storm), they were down to a three-piece.

Infest The Rats’ Nest sees Stu and guitarist Joey Walker sharing all the guitar and bass parts, with (other drummer) Michael Cavanagh recording all the drums. This small set-up ensures tight arrangements and maximum velocity – and another curveball from this most unpredictable (yet consistent) of bands.

Because the stats on King Gizzard’s colorful career are stacking up fast: 14 albums in 7 years (including 5 in 2017 alone), headline festival appearances, international critical acclaim – they are now arguably the world’s most innovative, important and productive rock band. And – perhaps most importantly – a fervent worldwide fanbase who share endless memes, mixes, videos, graphics, theories and discussions, all through which they explore and expand what they have termed ‘The Gizzverse.’

King Gizzard & The Lizard Wizard are no longer simply a band, they are an organic cult. Is it vital then that they never repeat themselves, and continually surprise listeners?

“I think what is important to me is that we keep ourselves interested,” concludes Stu. “So this band is a highly-selfish endeavor in that respect. I try not to worry about what others think too much, but the people around us and the people who come to our shows do wield an influence too. I think I just wanna make music all the time.”

There’s no rest for the wicked. Raise those devil’s horns and prepare the spaceships, motherfuckers.