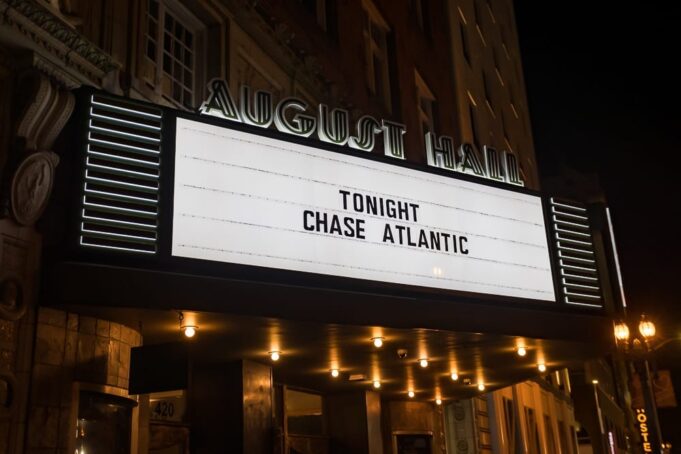 Check out Justine’s extensive gallery of photos from this show here.

Chase Atlantic, formed in 2014, is an alternative pop band trio from Cairns, Australia. The group consists of Mitchel Cave on lead vocals, Christian Anthony on guitar, and Clinton Cave on lead guitar.

To start the night off, they performed “ANGELS” the first song off their second album PHASES which was released three days before the show. Chase Atlantic had an engaging stage set up with fantastic lighting that helped add to their performance, which included a large screen that played videos of the band in the background as well as four fog machines. Mitchel did a great job of pumping up the crowd by running and jumping around on stage.

At one point, he even leaped off stage and was standing on the barricade, and began holding fans hands during the song “Swim.” He also threw water on the crowd during the concert to make sure they were still engaged in the show.

To end the night they performed “Uncomfortable” a song from their debut self-titled album Chase Atlantic. Apparently, Mitchel was not quite ready to have the night end and encouraged the crowd to chant “f*** yeah” for them to come back out on stage.

For the encore, they performed “Okay” another song from their self-titled album in which Christian shared the singing duties with Mitchel.

In the end, it was a great night with a packed house and a line outside so long that people still were not inside the building when the opening act, Lauren Sanders, came on stage.

Check out Justine’s extensive gallery of photos from this show here.