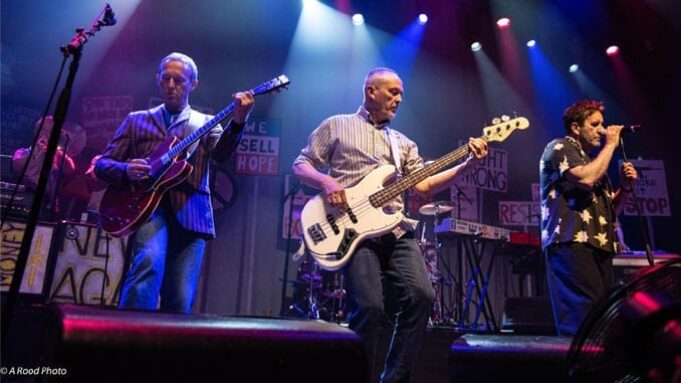 The Specials at The Novo Theater in Los Angeles June 1 2019
Words by Larson Sutton, Photos by Stevo Rood

Supporting their new album, Encore, as well as four decades together, The Specials brought their 40th Anniversary tour to Los Angeles.  On a stage with a backdrop decorated with makeshift signs with such messages as “Vote,” “Listen to Sly and the Family Stone,” “Peace,” “Resist,” and “Think!” the sold-out show could’ve easily been mistaken for a homage to 1969 rather than to these London ska messengers born at the turn of the 1980s.  Collectively taken as a whole, including several political sentiments offered throughout from vocalist Terry Hall and guitarist Lynval Golding, the spirited and direct musical and social siren still blares strongly and intently from The Specials, just as relevant today as in any other era.

See more pictures of The Specials at Novo Theater here.

Working through a set of classics mixed with several new cuts, the eight-piece ensemble was sharp, yet playful.  Concluding the opening “Man at C&A,” Golding shouted “no more war,” and urged between songs that the capacity crowd of Angelinos “vote Democrat” in the next, and presumably any, election.  Hall, too, got in on the fun, posing the irony of making America great again by ejecting or rejecting many of those that made it great in the first place.

A few songs were dedicated wryly to President Trump, as the newer repertoire worked in nicely against gems like “A Message to You, Rudy,” which tallied the most cell phone cameras recording a song for the evening.  They welcomed guest singer, Saffiyah Khan, to reprise her role on the Encore track, “10 Commandments,” but otherwise kept the music moving, and the arrangements tightly tied their originals.  Khan would be slated for a return in the encore, but even with her guest role, the focus and gratitude of the crowd belonged to The Specials and this well-deserved 40-year celebration.